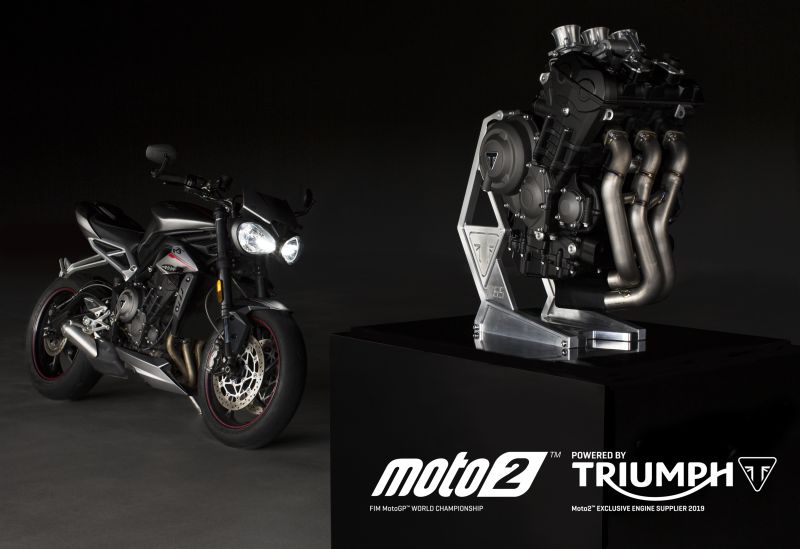 The British marque will replace Honda as the exclusive engine supplier from the 2019 season onwards. The race-tuned four-cylinder CBR600RR engine from Honda is the standard engine used by all the Moto2 teams, however come 2019 and Moto2 bikes will run with one cylinder less. Triumph have inked a three-year deal with Dorna to supply dedicated engines to Moto2, and the engine is none other than the 765-cc three-pot motor from the new Street Triple. This engine has been developed from the 675-cc Triumph Daytona engine, which has, over the last few years, been one of the most desirable supersport motorcycles with wins in several race series all over the world.

The new engine will be derived from the 765-cc powerplant that makes 123 PS in the 2017 Street Triple RS, with a host of changes that aid better breathing and performance at higher revs to adapt it for race use. These include a modified cylinder head optimised for better intake and exhaust gas flow, titanium valves and stiffer springs to handle high rpm, a racing alternator, taller first gear, tuneable slipper clutch specifically designed for racing, new engine covers to reduce width and a Magneti Marelli race ECU.

Carmelo Ezpeleta, Chief Executive Officer of Dorna said, “We are very excited to be working with one of the world’s most iconic motorcycle brands. The Triumph triple engines are renowned for their strong, linear power and torque delivery and have achieved many successes on the track making them the ideal choice for the Moto2 Championship. We are looking forward to the 2019 season and the beginning of a new generation of Moto2 in partnership with Triumph.”