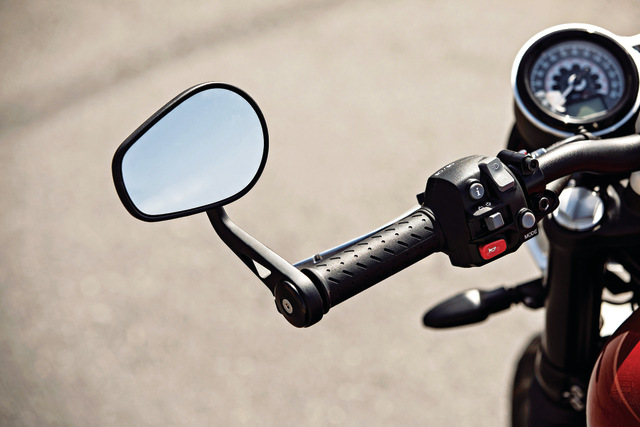 My favourite styling cue, though, are those bar-end mirrors. They look ridiculously cool and well-crafted and on the Speed Twin aren’t entirely useless in terms of showing you what you’re leaving in your wake. The twin instrument pods I mentioned earlier are another stylistic highlight, with a large analogue rev counter and speedometer dominating each pod respectively, and a digital inlay inserted within each that offers additional information. There’s also a lot of brushed aluminium abound (the material used for the fenders and throttle body covers) and the tailpiece with its LED indicators and tail-lamp, in particular, looks staggering. Taken as a whole, there’s no denying that the Speed Twin is a pleasant bike to look at. It has a delightful blend of shiny modern materials along with those old-school aesthetic elements that make for a beautiful package. 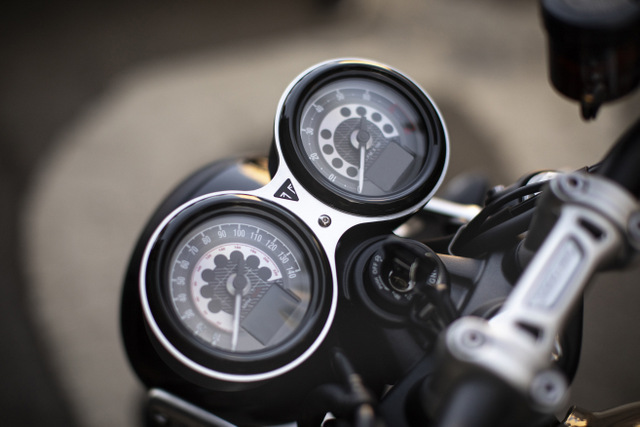 It isn’t just the looks that have been tweaked, though, because when the boffins at the Triumph mad science lab decide to mutate a new retro bike from the Thruxton gene pool, they put it on a bit of diet too. The result: the Speed Twin is a good 10 kilos lighter than the bike it shares so many components with. This weight reduction came from lighter wheels and brakes ― the front wheel and disc assembly was stripped of 2.9 kg and the rear wheel shed 1.7 kg. The clutch assembly contributed to an additional kilo and a weight loss for the engine (including a magnesium cam cover) and battery, along with aluminium down-tubes for the steel double-cradle chassis, among other things, contributed to the rest. Triumph claim that the front wheel and clutch assembly, in particular, have also contributed to reducing nearly 30 per cent of the inertia levels in the bike and this, along with a 0.1-degree sharper rake angle, makes it extremely agile and flickable. In fact, Triumph claimed that they went a little too far in making the bike a sharp handler and had to lengthen the wheelbase compared to the Thruxton’s in order to rein the Speed Twin in a little.