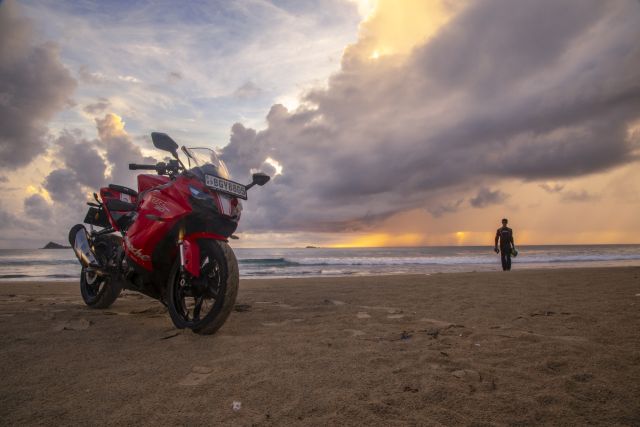 We crossed the sea into the mythical Lanka to explore the island nation on motorcycles. More specifically, on the TVS Apache series

How do you celebrate something special? Cut a cake? Go out for a long ride? Or, perhaps, go away for the weekend to somewhere beautiful? Well, any of them will do if you have one or, maybe, a few reasons to celebrate. When faced with three million reasons, TVS handled it brilliantly and organized a celebration that encompassed all of the above and then some. Oh, yeah, we too were a part of it. 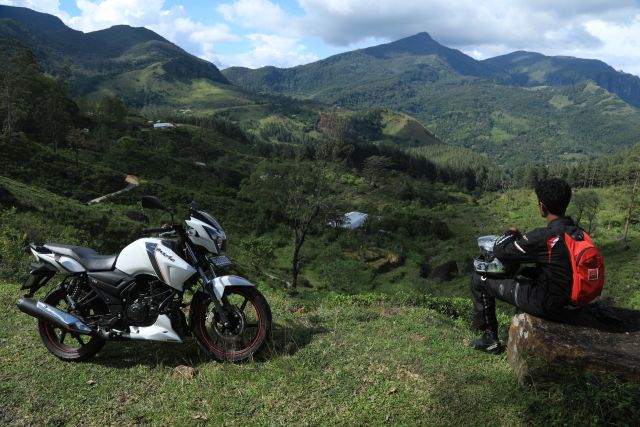 September was drawing to an end and, like most people, I was also looking forward to the upcoming long weekend. Unlike most people, I was in an aircraft that was heading towards the small island country of Sri Lanka. This time the mission was to ride all the motorcycles in the Apache series across the picturesque Isle de Ceylan to celebrate the sale of three million Apaches worldwide and I am sure I could not have planned anything better than that.

Our adventure was flagged off from the TVS dealership in Wattala with six riders in all: five from India (including yours truly) and one from Sri Lanka; each one astride a different motorcycle from the Apache series. My steed for the first half of the day was the veteran Apache RTR 160. Powered by a two-valve engine, it makes 15 PS and a peak torque of 13 Nm. Over the next half hour, I put those numbers to good use on the highway and soon Colombo shrank out of view in the mirrors as we headed towards Kandy. 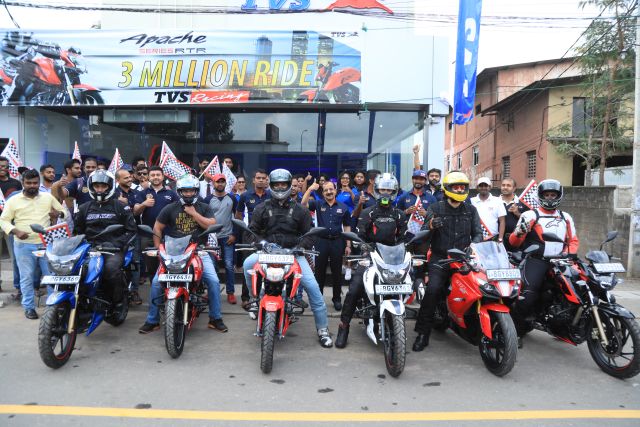 We spent the next hour enjoying the Sri Lankan scenery and quickened the pace when we learned that lunch awaited us at Meemure, a small village in the Knuckles Mountain Range (they do resemble the knuckles of a clenched fist when viewed from certain points). Thirty kilometres before Meemure, we stopped off at Hunnasgiriya to re-group. After spending some time on those mountain roads, we left the butter-smooth tarmac and began a climb that seemed arduous in the beginning and became gruelling as we pushed on. The ride was worth it because some mouth-watering Sri Lankan delicacies awaited us at the camp. The food was very similar to the cuisine one can find in remote locations of Kerala.

Thus far, the RTR 160 kept up with the other motorcycles as we zoomed along the highway but struggled as it tried to do so, often forcing me to ease off the throttle. However, during the ride to Meemure, the motorcycle was a blessing on the poor roads thanks to its softly-sprung suspension and modest weight. 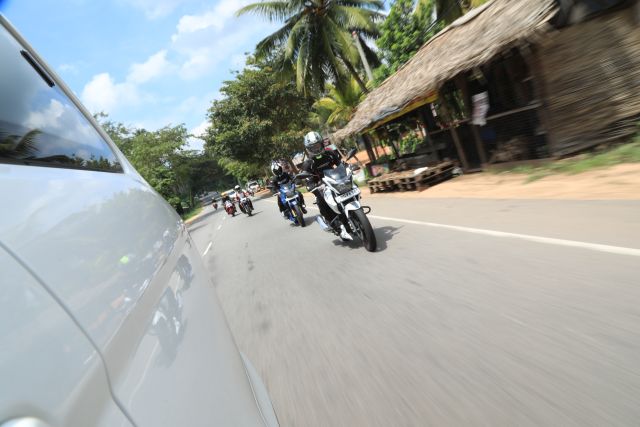 For the ride back to Hunnasgiriya, I traded the RTR 160 for the RTR 150; the motorcycle that started it all for the Apache range, the one that kick-started a sales volume that has reached a staggering three million worldwide. As I rode along letting that sink in, the sun disappeared behind dark clouds and a heavy downpour ensued. We elected to keep riding; forcing the Apaches over unforgiving terrain. After a gruelling couple of hours, we emerged in Hunnasgiriya and pushed on to cover the last leg of the day to Kandy. The rain began in earnest again as we attacked the mountain roads (going downhill this time) but the little Apache glided on, without ever throwing a tantrum. I must say that the RTR 150 performed better than I expected it to. Although its tiny engine made keeping up with the others a taxing affair, the motorcycle made up for it by being easy-to-handle over challenging terrain. 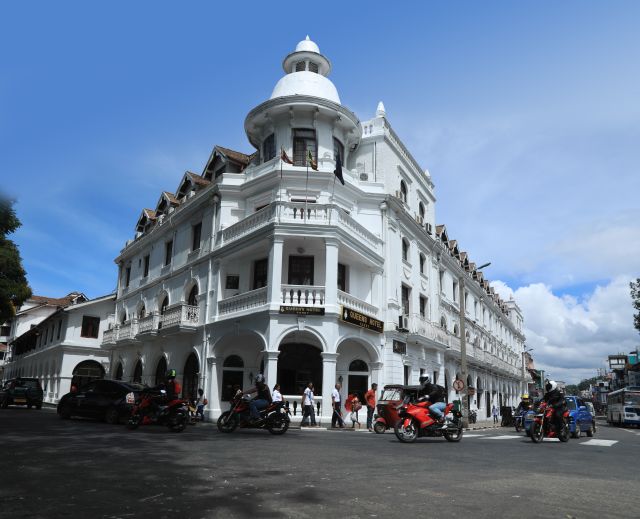 The sun rose to reveal a beautiful landscape that had eluded us the previous night. According to the schedule, our first task was to visit the famous Temple of Tooth (one of the main attractions in Kandy) which we had to abandon due to a tedious security procedure. We continued on to Sigiriya or Sinhagiri (Lion Rock), a famous heritage site in Sri Lanka. According to the Ramayana, Sigiriya may have been King Kubera’s Alakamandava (City of the Gods) that was built more than 50 centuries ago. On the other hand, history claims that King Kashyapa chose the massive column of rock that is almost 200 metres high and built his fortress and city on it. My biggest regret of the whole trip was not being able to explore Sigiriya because inclement weather forced us to beat a hasty retreat.

The route thus far was a good mix of never-ending highways and some wide, curvy roads which I made the most of astride the RTR 160 4V. Having ridden its predecessor the previous day, the 160 RTR 4V felt like a precision-built tool; leaps and bounds ahead of its ancestor. It is also a testimony to how much TVS have grown as manufacturers. 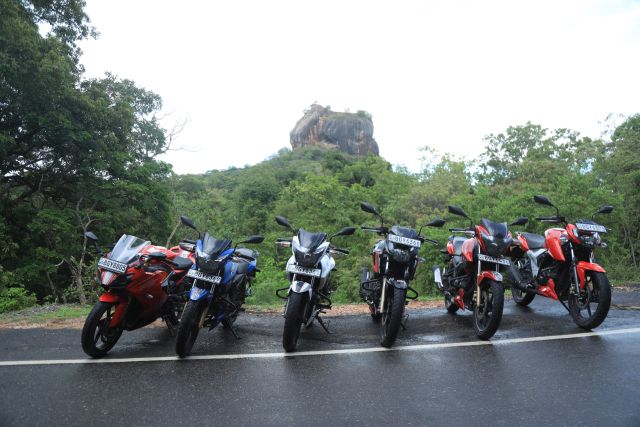 As we rolled out of Sigiriya, I reluctantly traded the potent 160 4V for the RTR 180. The old warhorse makes 16.6 PS and 15.5 Nm; figures that are marginally more than those of the new RTR 160 4V. I decided to check if that granted the ageing motorcycle an advantage over its younger sibling. We took the A6 highway all the way to Trincomalee; a smooth stretch of tarmac that rudely cut through an otherwise untouched forest. After blasting down at full clip for a while, we eased off when “Animal Crossing” signboards began to show up. As we neared Trincomalee, the north-eastern coast of Sri Lanka, soft green flanks gave way to dry and arid land, ultimately ending in pristine beaches.

The RTR 180 made a good companion for most of the ride but failed to shine brighter than the RTR 160 4V. Having experienced both motorcycles one after the other, I cannot wait to see what the RTR 180 4V will feel like, should there be one on the cards, of course. 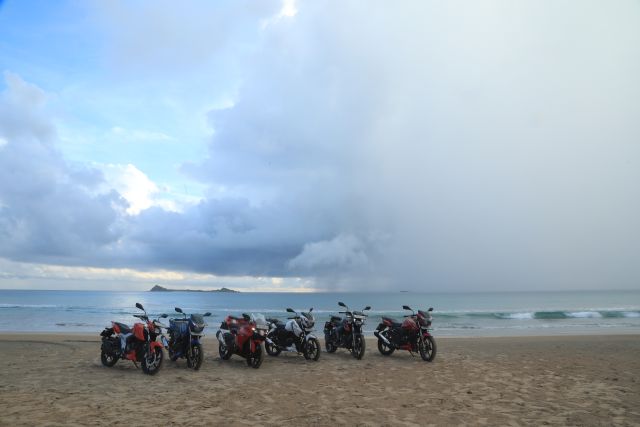 We woke up early to catch the sunrise and were rewarded with a wonderful view when the great ball of fire rose majestically over a small island just a few kilometres off the shore and briefly illuminated the sky; resplendent in a fiery orange hue. Storm clouds rolling in from the south rudely reminded us that it was time to leave and we obliged.

As far as choice of motorcycles was concerned, I had saved the best for last. It was time to see what the big guns of the Apache series could do as we attempted to cover the breadth of the nation from east to west in one single day. 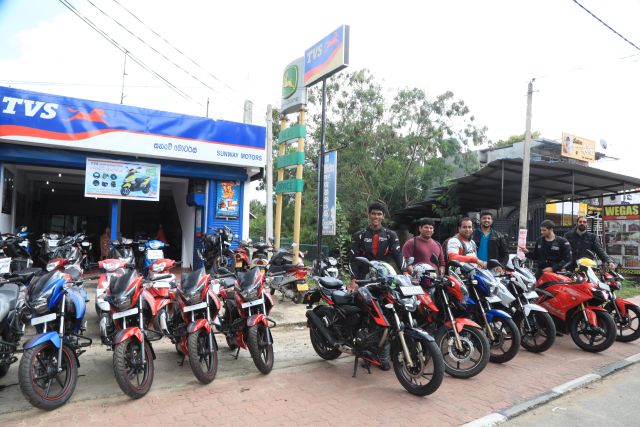 I began the day astride the beautiful RR 310, arguably the best-looking of the lot and the only one with a full fairing. A twist of the wrist transformed the RR 310 into a red blur and soon I was whizzing past the scenery. Ample mid-range torque and 34 horses ensured that high speed was always within reach; a sin further encouraged by the safety net of ABS. Furthermore, since the RR 310 had not been launched in Sri Lanka, it turned quite a few heads wherever we went.

Having failed to convince my fellow rider to let me keep the RR 310, I swapped it for the RTR 200 4V for the final leg of the journey to Negombo. The second-most powerful in the line-up, it dishes out 20.5 PS and a peak torque of 18.1 Nm. Although it looks like a beefier version of the RTR 160 4V with clip-on handlebars, it was evident that the 200 4V was developed to be a track machine that also dons a touring hat effortlessly. 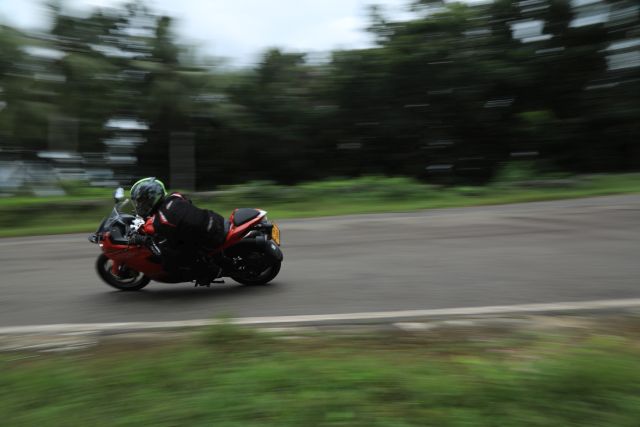 Oh, no, we were not done yet. A celebration of the Apache brand would be incomplete without experiencing its racing heritage and what better place to do it than on a racetrack? 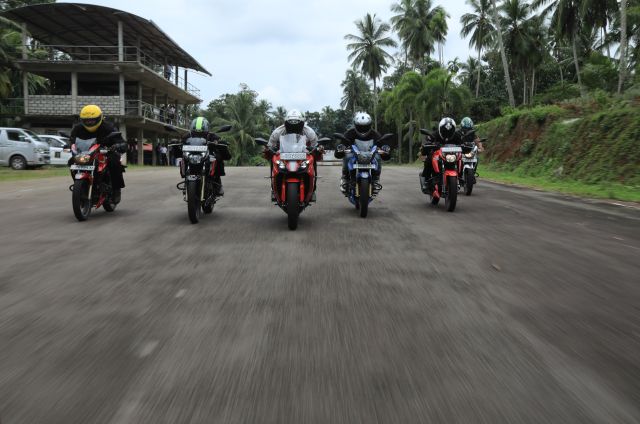 The Kanway Autodrome is a quiet loop of tarmac away from the chaos of the city; it has uphill and downhill sections and a good mix of tight and flowing corners. Starting from the small RTR 150, I decided to work up the order to the RR 310.

Progressing through the two-valve-engine machines gave me a fair idea of what yesteryear racing must have been like. However, that experience transcended to another level when I swung a leg over the four-valve offerings. The RTR 160 4V was nimble and confident and encouraged me to explore the grip of the tyres at more lean angle than before. My pace further increased as I moved on to the 200 4V and it warmed me up to take on the RR 310, and the flagship Apache did not disappoint. The suspension and riding position that served me well on the road proved to be equally capable on the track as well. 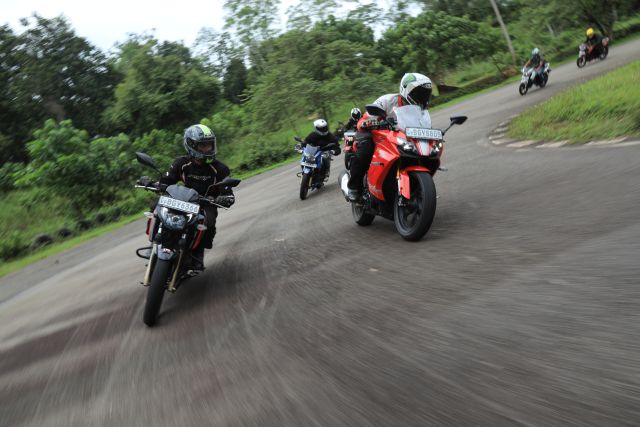 Since 2005, the Apache series has been spearheading TVS’ racing efforts and the way they have evolved into potent track machines that are usable on the road as well is impressive, to say the least. Looks like their partnership with BMW Motorrad has had a positive influence on the Apache range in terms of performance, refinement, and build quality. The best part is all that learning is not limited to the flagship RR 310. The RTR 200 4V and the RTR 160 4V have also been influenced by that pool of technology. These made-in-India motorcycles are being exported to various global markets, which reflects their popularity and reputation overseas.

Kudos to team TVS for thinking outside the box and putting their best foot forward to organize an international event of this magnitude and, of course, for executing it to perfection.