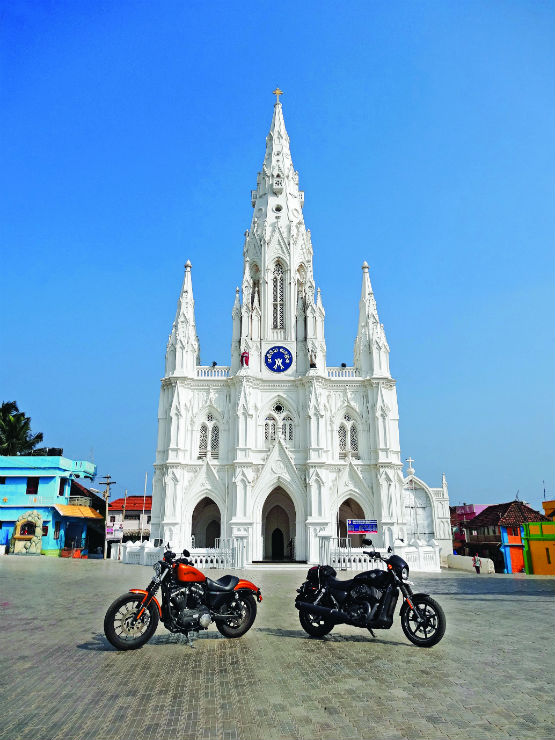 The feisty duo from Britain foray further into southern India from Karnataka on the H-D Street 750 and Iron 883. Here is their account

Hampi had whetted our appetites for more archaeological wonders, so we hurried off to Mahabalipuram, famous for its shore temples, dramatic sculptures and rock carvings. You can hear the chip-chip of the stone-carvers to this day, all over the town. We based ourselves at the friendly Butterball Bed N Breakfast, opposite Krishna’s Butterball, a giant stone that balances precariously on a sloping rock. How it got there and how it balances itself remains a mystery. It is apparently so named because Krishna adored butter and stole a chunk of it from his mother. The town is a real mix; tourists mingle with masses of pilgrims and the traditional fisherman get on with the day job.  Arjuna’s Penance (also known as Descent of the Ganges) is one of the largest bas-relief sculptures in the world, with large and small intricate carvings. The shore temples were shrouded in mist the day we got up for sunrise, but they were still magical in the poor light. 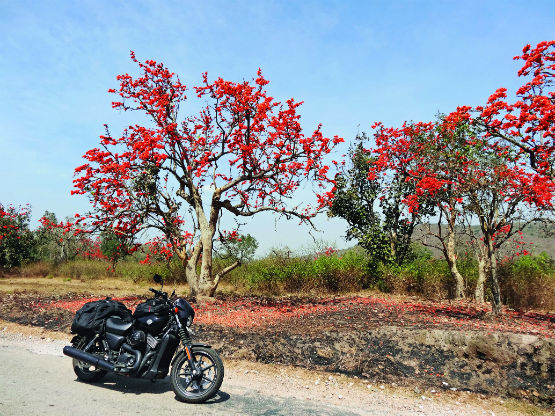 Our Indian friends recommended Kodikkarai, a little off the beaten track down the coast, and booked us into the forest rest-house. Razzak, the manager, solemnly took us to the mess and supervised first our dinner and then our breakfast. Just as well as nobody spoke a word of English. Dinner was Rs 48 and so was breakfast. The attractions here at Point Calimere are the wildlife sanctuary, home to the endangered black buck, and the bird sanctuary where thousands of flamingoes gather every winter. Be prepared to get up early and to walk for kilometres to see them. It’s  peaceful (except in January when the temple loudspeakers start up at 4.30 am) and we made friends with fisherman Ravichandran and his family who invited us home to eat with them.

The highlight of our east coast ride was the island of Rameshwaram; the end point is just 27 km from Sri Lanka. The Ramanathaswamy Temple is a key Hindu pilgrimage site and boasts of the longest corridor of any temple in India. The seemingly endless pillars are lavishly decorated with mythical beasts and gods in a riot of colour. Pilgrims were there in their thousands, dipping in the 22 water points in the temple and in the sea beyond. 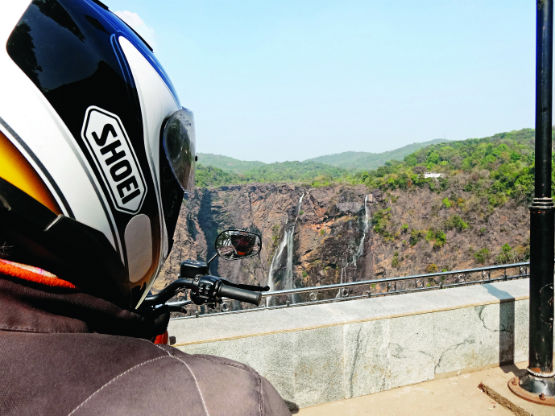 A magnificent modern road bridge links the island to the mainland and runs alongside the 100-year-old Pamban railway bridge with its lifting section, far below. Riding across, we stopped and watched as returning pilgrims climbed out of their buses and hurled their old black garments into the air. These drifted on the wind like large black bats down to the sea and floated away on the current.

Not to be missed, for pilgrims and heathens alike, is the trip out to Dhanushkodi. Friends with off-road bikes have done it, but we thought we might not be popular if we drowned the Harleys. Where the road ends, you get on a four-wheel-drive Maxi bus which ploughs along a sandy track beside the edge of the sea, dodging parked fishing boats, and at one point heads straight into the sea across an inlet. Several of the passengers squealed in fright (we just went, ‘Yee haa!’) and at the end you arrive at the ruins of the village wrecked by a cyclone in 1964.  Brilliant trip, though you still can’t see Sri Lanka. 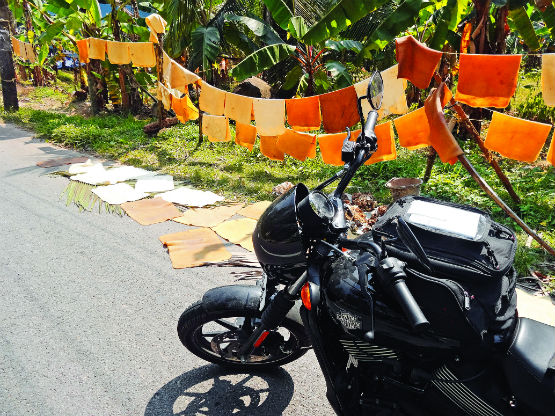 From Rameshwaram we headed inland to Madurai. The tourist office had arranged a trip to village Tiruvedagam, where the Pongal festival was being held. We were garlanded and led through the village, amid much dancing and drumming, to a seated area to watch some amazing acrobats balancing on balls with tall pots on their heads, and spinning large fiery wheels, only attached to a lock of hair, around their bodies. Fortunately, the organisers chose young and pretty foreign women to join in, so we were spared appearing in the local paper the next day! They served us a splendid lunch on banana leaves and then sent us back to town, where we felt it only fit to garland the Harleys.

Our other main memory of Madurai, apart from its temple, was of getting stuck in a monumental traffic jam when we got lost in the one-way system on the way into town. The powers that be have directed traffic through an incredibly busy market which was in full flow. We were deafened by the horns of the barely moving traffic and our legs were burning as the bikes became overheated. Sheonagh thought murder was about to be committed when a rickshaw parked itself on Pat’s right foot and a small lorry on her left hooked the end of her handlebar with its wing mirror. 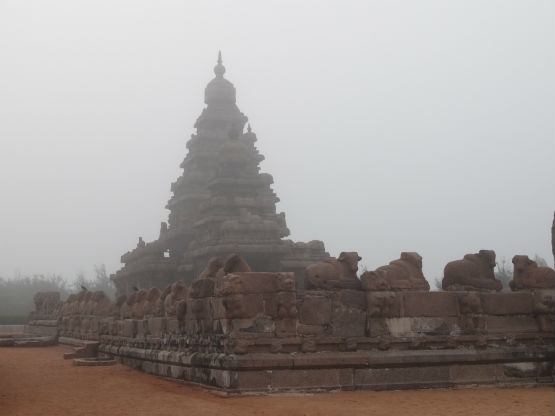 Fortunately, the Hotel Supreme had an excellent rooftop restaurant and bar serving cold beer, so we could calm down and enjoy the view over to the Meenakshi Amman Temple with several of its gopurams poking up above the surrounding buildings. The temple is huge, covering six hectares, with 12 gopurams which tower above you. As non-Hindus we could not enter the inner temple but there is plenty to see, from a huge tank, to a great blue Nandi licking its nose, lines of pilgrims (mainly black-clothed young men) being kept in line by a policeman with a lathi, to an incredibly crowded market squeezed in between the pillars.

We walked several kilometres (we try hard to exercise on our bike trips to counteract all the delicious food) to the Gandhi Museum, but it was shut.   Sheonagh remembers it being fascinating on her last visit in 1987, having been brought up only hearing the British side of the history. The building was lovely and there is an interesting dinosaur in the garden. The Thirumalai Nayakkar Mahal Palace, however, was open and is glorious, with massive pillars and fabulous painted ceilings and a pigeon problem. Sweepers seem to be on constant duty dealing with the mess.

Off Piste Racing RallyScape - Trust The Process
The MotoGP Experience
Chasing the Sun Astride a Honda
Pages: 1 2 3