The Nostalgia is based on the R7 concept that was revealed in 1934, to showcase innovations such as the first telescopic forks, a pressed steel bridge frame, and various gearbox and engine ideas. The R7 never got to see the inside of a production facility due to the depths of the Great Depression, but was rediscovered by BMW in 2005 and, a few years later, the R7 managed to make its way back to the world stage.

Alex Niznik, the founder of Nmoto, saw the motorcycle in 2012. Ever since then, he was inspired to build a bike just like that. He founded Nmoto and started the Nostalgia project. Instead of building an engine he decided that there was already an engine out there by BMW that would be the perfect fit for the Nostalgia. The R nineT’s boxer-twin engine was Nmoto’s choice. Nmoto needed to expand their ideas on the R nineT, which helped them to avoid wasting time on R&D as they already had a foundation and didn’t have to engineer it from the ground up. 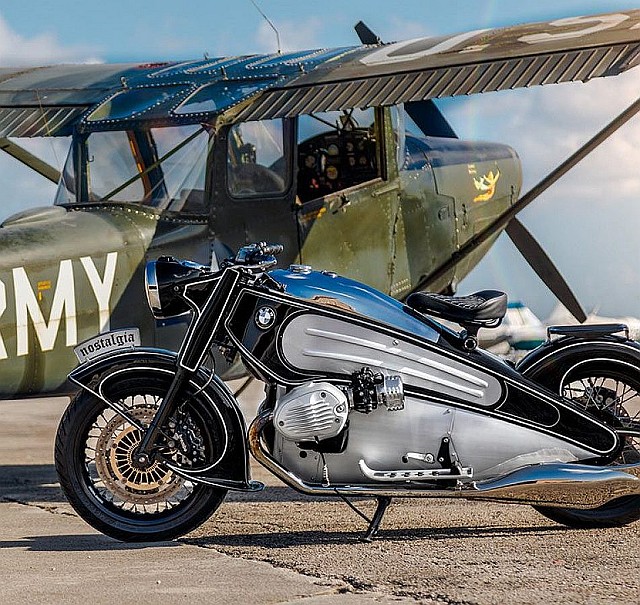 The Nostalgia aims at giving motorcycle enthusiasts a feel of riding an iconic, pre-war motorcycle without sacrificing performance or rider experience. The bike has 96 handcrafted parts and is produced on a small scale with a large level of individualization. Special features include a headlight integrated with key-less ignition and factory BMW speedometer, a full aluminium body with eleven different colour combinations, a fuel tank with a capacity of 12 litres, vintage style or stock R nineT footrests, and a seat with a bracket that is fully adjustable.

On the Nmoto website, an option to configure the bike extensively is being offered making it highly customizable to personal preference. The Nostalgia is powered by the R nineT’s 1,170-cc engine that makes 110 PS at 7,750 rpm. The bike will weigh in at 205 kg and have a top speed of 225 km/h.

The machine keeps its name to the point and gives us an instant feeling of nostalgia, just by looking at this beautifully crafted pre-war style motorcycle.