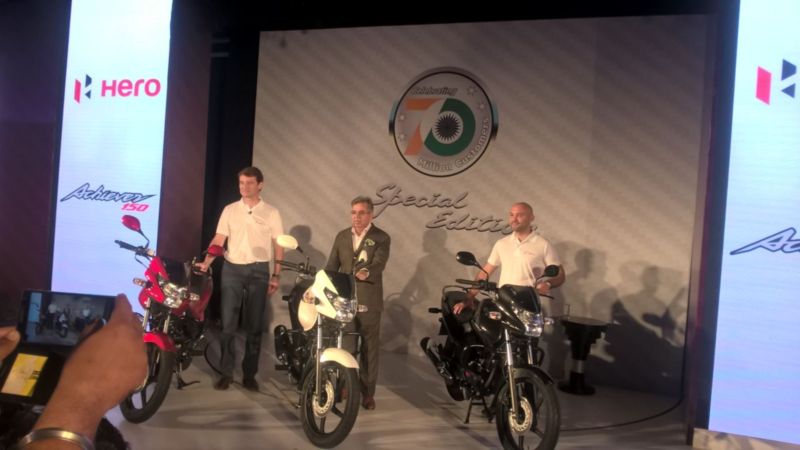 Hero MotoCorp have introduced a suited-up Achiever ahead of the festive season, from Rs 61,800 (ex-showroom, Delhi).

The Hero Achiever may not be one of their more popular models – mostly spotted in white being use by policemen – and Hero MotoCorp are hoping to change that for their 150-cc commuter motorcycle. The Achiever gets a 149.1-cc air-cooled cylinder engine, making 13.6 PS at 8,000 RPM with a peak torque of 12.8 Nm coming in at 5,000 RPM. It is mated to a five-speed transmission. The new drivetrain incorporates Hero’s i3S intelligent start-stop system and is BS-IV compliant. To improve safety in true global style via better visibility, the auto-headlamp on (AHO) feature keeps the headlamp on at all times when the engine is running.

The Achiever 150 continues with a 13-litre fuel tank. The starting is done via kick lever or standard electric-starter. It now wears 18-inch wheels with 80/100-18 tubeless rubber, and weighs in at 139 kg.

The Achiever 150 is priced at Rs 61,800 (ex-showroom, Delhi) with the front-disc-brake variant costing just Rs 1,000 more. It will be available in three colours: Panther Black Metallic, Ebony Grey Metallic, and Candy Blazing Red. Hero have also launched a limited edition model to commemorate 70 million cumulative production numbers, and that too in patriotic colours. Only 70 will be made. will be in showrooms across India shortly.