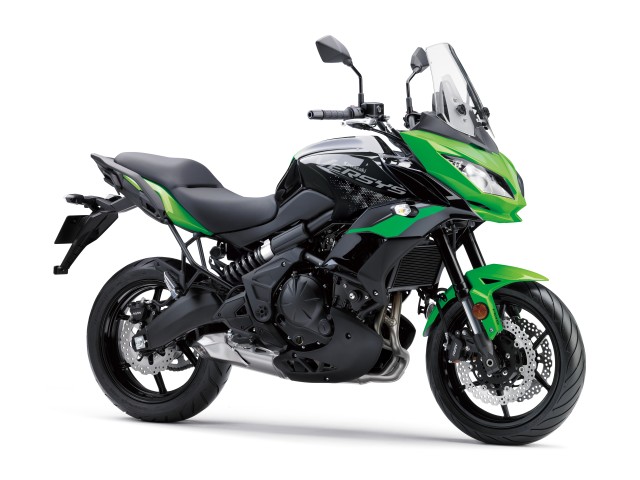 The new Kawasaki Versys 650 is about Rs 10,000 more expensive than the outgoing BS4 version, making it the most affordable adventure motorcycle from the Japanese brand in India currently… till India Kawasaki Motors decide to bring the BS6 Versys-X 300 to India. This is the third offering based on the versatile 650-cc platform, after the Kawasaki Ninja 650 and Z650 BS6 versions. Due to this, Kawasaki have been able to price the new Versys 650 pretty aggressively. It’ll be interesting to see how this impacts the planning and pricing of the soon-to-be-launched Suzuki V-Strom 650.

Apart from the new candy lime green colour option, there are no visible changes on the MY21 Versys 650. For the price, the new Kawasaki Versys 650 BS6 offers upside-down fork, offset laydown single-shock with remote preload adjuster, petal disc brakes, long-travel suspension, sporty 17-inch wheels, adjustable windscreen and gear indicator. To achieve the tempting price-point, the Kawasaki Versys 650 BS6 had to skip a few of the new-age features that the BS6 Ninja 650 and Z650 come equipped with. So the tech-obsessed rider might feel somewhat let down seeing the Kawasaki Versys 650 BS6 missing out on things like LED headlamps and TFT display instrument console. This isn’t a dealbreaker but would have definitely boosted pride of ownership and convenience.

For some reason, India Kawasaki Motor have not disclosed the power figure in the official press release, but we expect the 649-cc, liquid-cooled parallel-twin motor to produce about 68 hp and 64 Nm of torque, just like the Kawasaki Ninja 650 BS6. As before a slick six-speed gearbox manages the transmission duties. With a slim and upright riding position, combined with the easy-going parallel-twin engine, the Kawasaki Versys 650 remains one of the friendliest adventure motorcycles in its segment.