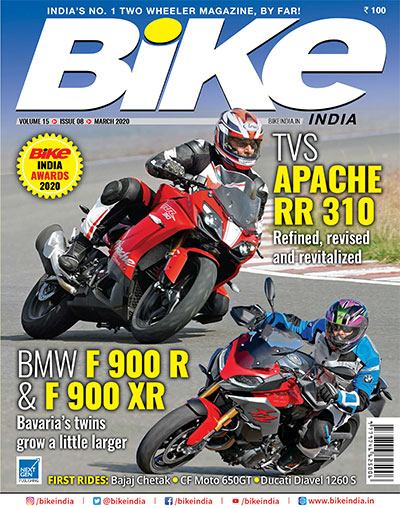 It’s Value for Money That Counts

WE WITNESSED THE AUTO EXPO LAST MONTH AND, SO FAR AS THE TWO-WHEELER industry is concerned, it was quite a let-down. Only two mainstream manufacturers, Piaggio and Suzuki, took part in the show. However, quite a few electric two-wheeler manufacturers were present with a number of e-bikes on display. It seems that motor shows are losing their sheen and more and more people are moving away from them.

The organizers did a good job by making sure that it was only journalists and photographers, so that it was easy to do one’s work, though the usual problem still persists: you only get to see the backsides of Delhi photographers! Talking of EVs, we did a first ride on the new Bajaj Chetak and its build quality, ride, handling, and performance give the impression that it is a proper scooter and not an electric toy.

The annual Bike India Awards were also presented at a ceremony held last month. As a dedicated bike magazine, it is our duty to appreciate the work done by the manufacturers in the previous year, especially in such difficult times. There were quite a few contenders for the Bike of the Year Award, starting with the Bajaj Pulsar 125 and going all the way up to the BMW R 1250 GS. It is not necessarily the best bike that wins the award, because value for money is very important. If one builds a fantastic motorcycle and prices it exorbitantly, then it does not make sense because it goes against the principle of value for money. This time the Bike of the Year Award went to the Hero XPulse for its unique approach, versatile performance and good bang for the buck.