Women? Motorcycle racing? Never heard of such a thing? Time to wake up, it’s happening here in India too… 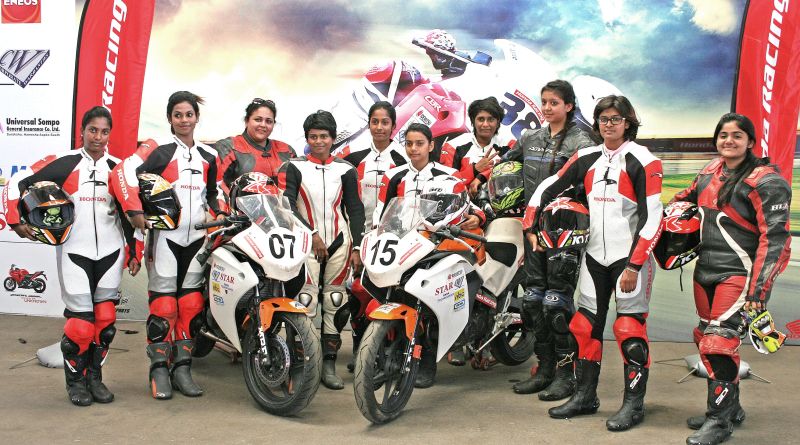 You would have all seen the various ad campaigns run by FMCG companies with respect to the International Women’s Day that is celebrated each year on March 8. Some of the campaigns celebrate womanhood, others celebrate motherhood and so on. I think an equally significant aspect in the woman of today is her ability to take on men head on. It’s an aspect that has often been ignored and yet, to me nothing seems more apt a celebration of women than acknowledging their rightful place as an equal of man. So, when I saw a bunch of young women (some of them just girls) racing against each other around the Madras Motor Racing Track (MMRT) in Sriperumbudur, just outside Chennai it was rather gratifying. The idea of women in motorsport is still a novelty, even though women have raced for nearly as long as have we men. Globally that is. In the Indian arena, well, there has been the occasional woman driver in car racing or rallying but no one worth mentioning when it comes to two wheels. It’s not as if India has had a legacy of being anti-women-in-sport. There’s enough and more evidence to debunk that line of thought.

It’s just that in a society where men and women have very well defined roles, there has never really been space for a woman to go motorcycle racing in the past. Until now. Honda have taken it upon themselves to introduce women who are passionate about motorcycling to the race track with the final round of the Honda MMSC One Make Championship 2015 being the first ever racing event in Indian motorsport history to see an all-women starting grid at the MMRT. To be fair and honest, the level of racing among women still has some way to go but the significant point is that this is a start. Ramji Govindrajan, director of Ten10 Racing, which operates in collaboration with Honda to train these lady riders and improve their skills on the racetrack, agrees, “I would eventually like to see things get to a point where the lady riders can compete with the men on an even platform instead of having women only races like we do now.” I have to say that Ramji’s sentiments are those that we share.

And on that note, I wish the lady riders (both on-track and off-track) the very best this Women’s Day. In the mean time, for the rest of the world, ride safe and have fun.