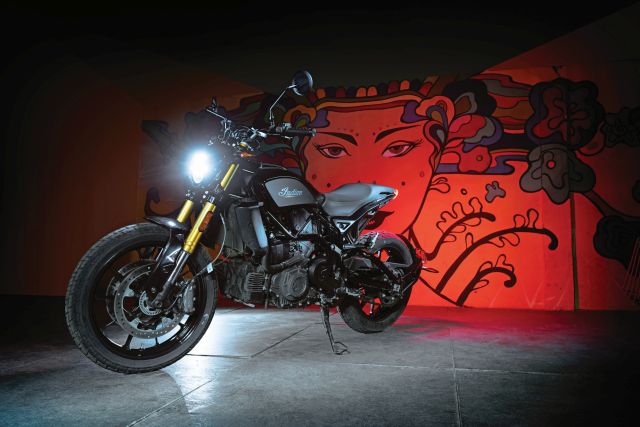 With the introduction of the Indian FTR 1200 S, the American manufacturer has stepped beyond cruiser and touring motorcycles. Here’s what we think after spending some time with their first roadster.

Taking inspiration from the firm’s championship-winning FTR750 flat-track race bike, photographs do not do the Indian FTR 1200 S justice; in person it looks a lot bigger and broader than you would expect. There is a strong visual link between this bike and the FTR 750 race bike; both bikes share similar shapes and proportions, although the 1200 is a road bike through and through. That broad, black fuel tank isn’t really a fuel tank, it is in fact an airbox cover; in another departure from American V-twin practices, this engine isn’t fed via a side-mounted air-intake. Instead we have the airbox above the engine, with the 12.9-litre fuel tank extending under the seat, within the rear subframe, effectively lowering the centre of gravity. 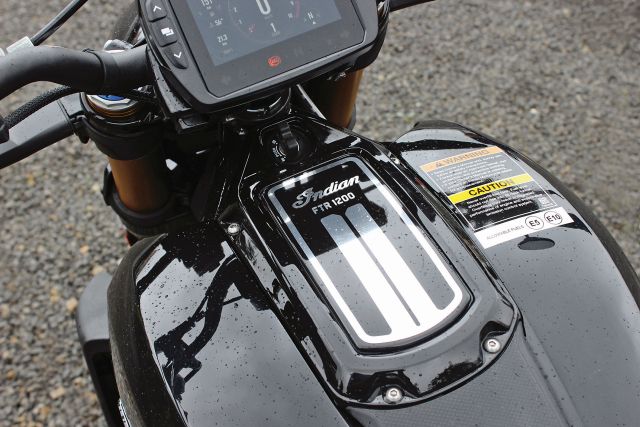 The seat is extremely comfortable, but its width, combined with the 840-mm saddle height, meant that at 5’5”, I could barely tiptoe from the lofty perch. The short, stubby tail section is completely unadorned, save for that attractive LED tail-lamp, with the number plate and turn signals being relegated low down, to the hugger on the rear wheel. The 19-inch front and 18-inch rear wheels further enhance the flat-tracker stance, and the Dunlop DT3-R tyres have been specially created for this motorcycle, with a similar pattern to the Dunlops on the race FTR750, but with much shallower treads to make them suitable for the street. 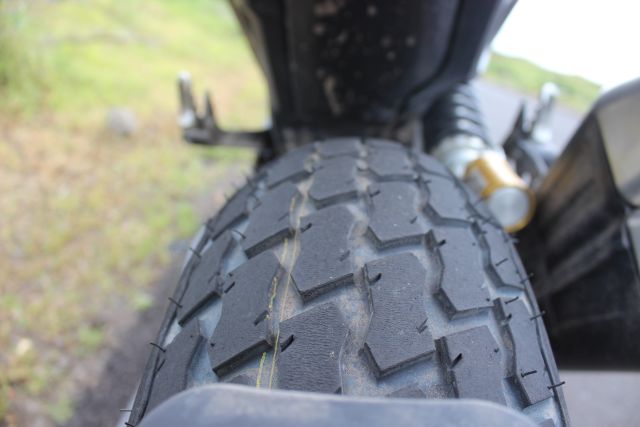 Devoid of any plastic gilding, the whole bike looks extremely industrial and purpose-built, with the frame, engine and most of the components on display to be admired. I love this no-nonsense, purely functional approach, and the FTR 1200 S, with all that exposed metal, appeals to me on an extremely primordial level. 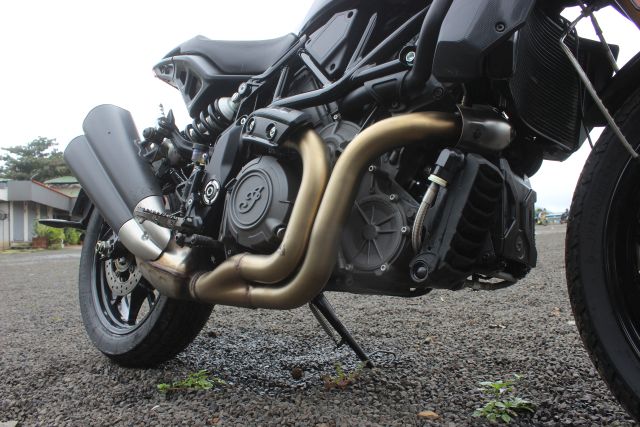 Turning the key in the ignition wakes up the 4.3-inch full-colour touchscreen, dubbed Ride Command. This excellent rider interface allows you to simply swipe between a traditional layout, with a spread of round gauges, and a more contemporary layout with a bar-type tacho and fuel gauge and digital displays for speed and selected gear. Menus can be accessed and navigated via buttons along the left of the display, or via the switchgear, and you can switch between the Rain, Standard and Sport riding modes by a quick tap on the touchscreen. Torque delivery, throttle response and the IMU-based cornering ABS and traction control are all tied in with these riding modes and can’t be individually customised. You can also activate a Track option within any of the above three modes that seems to disregard the IMU, allowing massive wheelies while still managing wheel spin. Once in Track mode you can take things a step further by switching off the ABS and TC completely, leaving you at the mercy of your right hand — definitely not advisable unless you are a pro or have a death wish. The Indian FTR 1200 S also features Bluetooth connectivity, allowing you to screen your calls or browse the music on your mobile device, before routing the audio to a Bluetooth-enabled in-helmet headset or speaker system. 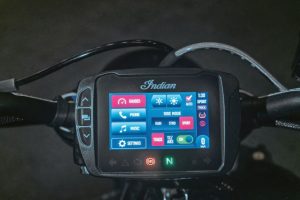 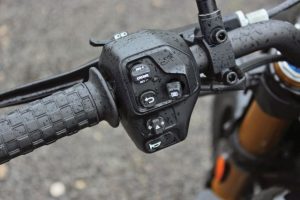 After spending an appropriate amount of time admiring the motorcycle and being briefed about the various features, it was time to set off. The dealership is located on the outskirts of the city, right along a stretch of highway, and a light drizzle was coming down. I opened the throttle for the first time on the damp roads, and the immediate torque delivery instantly lit up the rear tyre, fishtailing right, then left and then right again, before finally finding the grip to propel me forward, with me smiling broadly inside my helmet. This was going to be fun!

Although it may take a while to get used to its size, the Indian FTR 1200 S felt extremely capable in the city. You sit up high, on rather than in the motorcycle, while its brutish persona and angry exhaust note had other road users steering clear, giving us a wide berth. This rowdy character is extremely useful in Pune’s take-no-prisoners traffic, and I found myself bullying my way past everything from other bikes to much larger vehicles with a quick blip of the throttle to announce my arrival. The bike feels extremely manoeuvrable and well-balanced, once you get used to its 235-kg (kerb) heft, and ridden aggressively in the city will have traffic making way for you, much like the Red Sea parted for Moses. 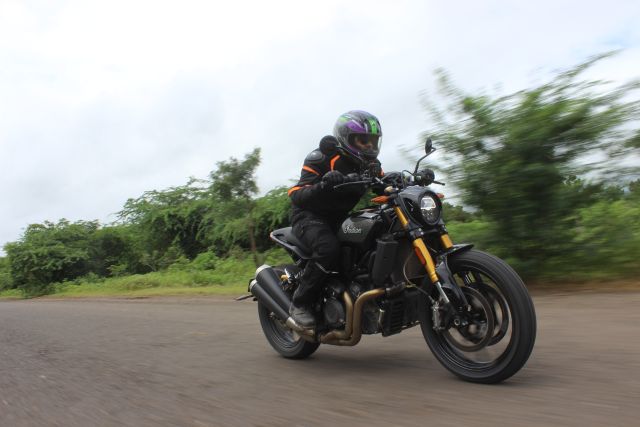 The next morning I had an early start, and headed out of the city to spend a day with the FTR on the open road. The big V-twin is clearly the star of the show, and delivers torque in buckets the moment you twist the ride-by-wire throttle. There is no waiting around for revs to build; acceleration is instant and brutal, accompanied by that angry bark from the exhaust and an audible mechanical whine from the engine that sounds like a chirp inside the helmet as you accelerate between 4,000 and 5,000 rpm. 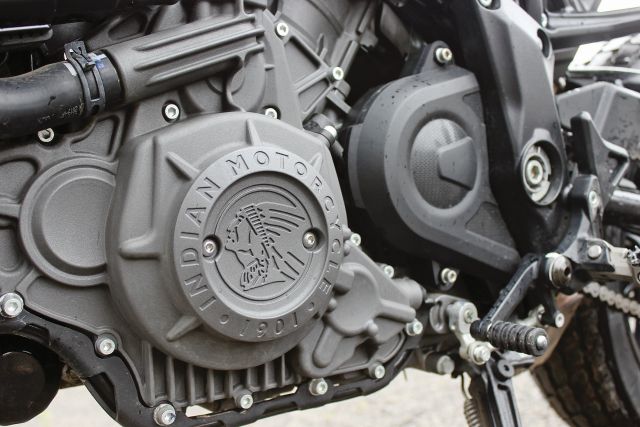 Although many believe that this is a slightly reworked Scout engine, it is an all-new unit, featuring a model-specific crankcase, new cylinders and heads, and much lighter internals. The DOHC, liquid-cooled, 60-degree V-twin makes 120 hp at 8,250 rpm and 120 Nm of twist at just 6,000 rpm. To put things in perspective, that’s more peak torque than a litre-class superbike, and at half the revs. Consequently, opening the throttle wide in the lower gears is a scary affair, as the FTR rushes forward like an angry bull on that unending wave of torque, only to be reined in by the limiter at 9,000 rpm — if you forget to shift in time. The strong bottom end and midrange make the FTR incredibly fast off the line, and launching it hard and shifting up just before the limiter hit saw me sail past 170 km/h while still in fourth gear, with the 200 km/h mark coming up as I shifted to sixth. I was pleasantly surprised by the seamless fuelling, even in the Sport + Track map with the electronics completely turned off, and no matter the speed or throttle opening, I was never caught off guard by jerky or inconsistent responses to my inputs.

As expected, brake and suspension components are top-spec, and would be at home on any open-class sport bike. Brembo monoblocs, 320-mm rotors and a radial Brembo master cylinder with reach-adjustable lever are supplementedby a two-piston caliper and 265-mm disc at the rear. Suspension duties are managed by fully adjustable Sachs-sourced units with 150-mm of travel at both ends, and although the stock settings seemed a bit too stiff for our roads, they can be set up to suit your taste. Getting the Indian FTR 1200 S through a set of tight corners will take more effort than your average street naked, but I found the handling to be precise and predictable, helped along by the leverage offered by that wide ProTaper-sourced handlebar. The bike actually handled better than expected when you consider those large wheels and the massive 1,524-mm wheelbase; to put things in perspective, the Suzuki Hayabusa, a large motorcycle by any standard, has a 1,480-mm wheelbase. 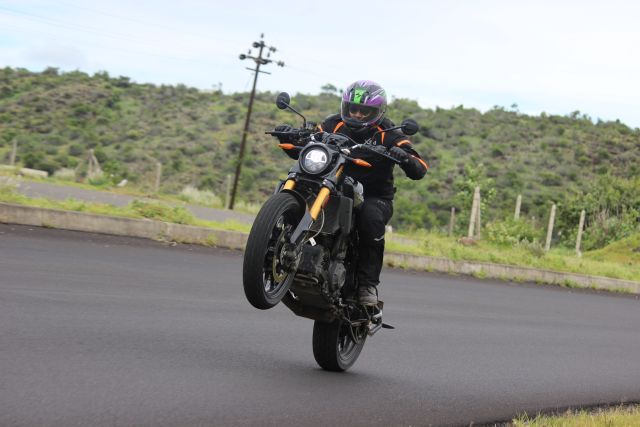 Although I thoroughly enjoyed my time with this motorcycle, nothing is perfect. The six-speed gearbox could have been a little smoother, and I consistently found a false neutral between the top two gears. I also would think that at Rs 17.99 lakh (ex-showroom), features like keyless ignition, a quickshifter and an adjustable clutch lever would be part of the package. Also the mirrors, although classically shaped and well placed to provide a clear rear view, could have been better executed, and getting the side stand around the footpeg is not the easiest thing in the world. 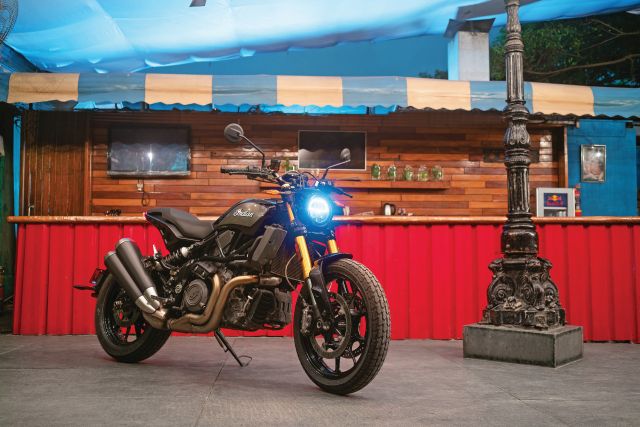 The Indian FTR 1200 S is a proper muscle bike. It is roguish, brash, unapologetic, raw and full of character, and evokes strong emotions when you twist the throttle. This is Indian’s first attempt at creating a naked roadster, imbibed with the soul of a flat-tracker, and I think they have done a fantastic job. We can’t wait to see what other models spawn from this FTR platform.