Conventional wisdom suggests ‘the more the merrier’ is the way to go when endowing your new motorcycle with features. J D Power’s new study however points the other way. Curious? So were we…

How often have you gotten lost in the maze of creature features in the brochure of the bike that you plan to buy? For the vast majority, confusion is frequently the consequence of visiting motorcycle showrooms and going through brochures. The reason? The endless list of features that motorcycles are seemingly endowed with in the stated interest of this aspect called ‘value for money’. Indeed, most manufacturers will have you believe that their motorcycle has more features than its competitor and is therefore the better deal. It’s an explanation that appeals to our conventional sense of logic. Or, at least, it did…until the results of the latest study by J D Power came to the fore sometime recently.

Defying all norms (written or otherwise) of conventional wisdom the study actually indicates that Indian two-wheeler customers do not necessarily want more features. Rather, they are happier with fewer features in their motorcycle so long as those features offer some genuine benefit or as long as the end consumer actually understands the functionality of the feature. The study also indicates that the consumer is becoming increasingly finicky about quality and is likely to be unhappier if the extra number of features is not of high quality. 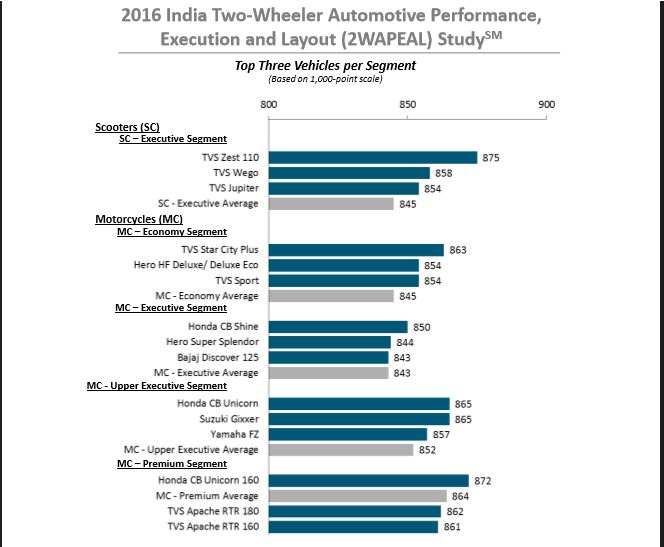 J D Power’s 2WAPEAL (Automotive Performance Execution and Layout) study measures how the consumers’ perceptions of two-wheelers get impacted by quality of features provided and how well the functionality of these features are explained to them at the point of sale. After examining no less than 33 attributes across six performance categories the APEAL performance is reported in an index on a 1,000-point scale, with a higher score indicating higher satisfaction. The study reveals that owners of motorcycles with 10 or fewer features are marginally happier with their two-wheeler with an average score of 849 compared to the average score of 825 of those who own two-wheelers with at least 11 features or more. The same study reveals that far from being happy that he is getting more features for the same amount of moolah, the customer is put off when he experiences quality issues with these features or when the benefits of these features are not explained to them at the sales touchpoint.

In his observation on the study, Mohit Arora, Executive Director, J D Power, Singapore says that while manufacturers are providing more and more features in a bid to be different from their rivals and thus offer more for their customers, ensuring optimum quality for these features and communicating their functionality at the time of delivery of the new vehicle are critical to customer satisfaction.

Now, while all these are significant lessons for every manufacturer, the most heartening bit in all this is that finally, Indian consumers seem to have come to the conclusion that the more the merrier philosophy doesn’t always work. A motorcycle or a scooter is a fairly heavy investment. The demand for better quality is therefore a just one. We want our money’s worth. Not just in quantity but also in quality. What good is a feature that will see my bike go to the workshop more often than it should have? Why should I pay for a feature that will be of no consequence to my existence (unless it’s ABS of course)? Why should I pay for a feature whose benefit I have no clue about?

For long, we Indian consumers have followed the herd, enamoured by the numbers, the slickly done up TV commercials that mostly over-sell the product and the smooth talking sales executive who mostly provides a shallow explanation to our genuine questions. The fact that the tide is turning and we are willing to demand better quality is an indication that clever marketing has to be backed up by best manufacturing practices that ensure quality of the product and peace of mind for the customer. The end result of all this, I hope, will help raise the bar for two-wheeler manufacturers, which, in turn will mean better products, better sales techniques and improved after sales.

Some part of this effect was already visible at the Auto Expo 2016 for the quality of two-wheelers on display at the various manufacturer pavilions were qualitatively better than what we saw in 2014. A sure step in the right direction.