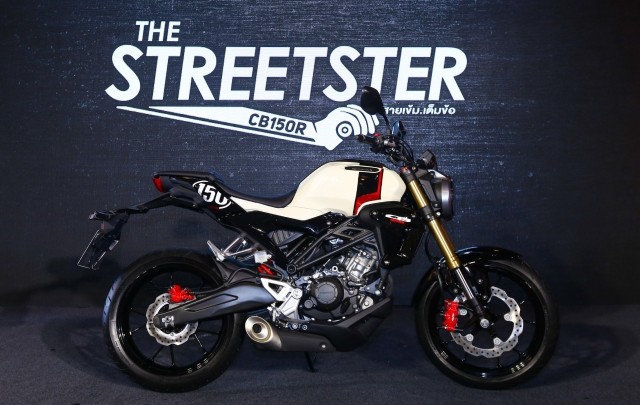 Based on the brand’s neo-sport design platform, the Honda CB150R Streetster derives design cues from its elder siblings such as the CB1000R, the CB650R and the CB300R; the last of which was recently launched in India. The Streetster, an evolution of the CB150R ExMotion, receives cosmetic upgrades while the mechanicals remain the same as the current model it is based on. The changes include the addition of new graphics, black tank extensions, a ‘150’ badge on the rear under-seat panel, and an under-belly exhaust. It also features red brake calipers on both the front and rear. The Honda CB150R Streetster is available in three colours: Ivory White, Night Fire Red and Speedway Matte Black.

This Honda CB150R Streetster uses a diamond-type frame and a 41-mm USD fork in the front and a rear mono-shock. It is powered by a 149-cc, DOHC four-valve, single-cylinder engine and, though official power figures are not out yet, we expect it to produce around 18 PS and 15 Nm.

We believe the Honda CB150R Streetster could make its way to Indian shores, but we haven’t received any official confirmation from Honda. If launched, the Streetster would rival the recently launched Yamaha MT-15 and the KTM 200 Duke.

Watch this space for more on this development.