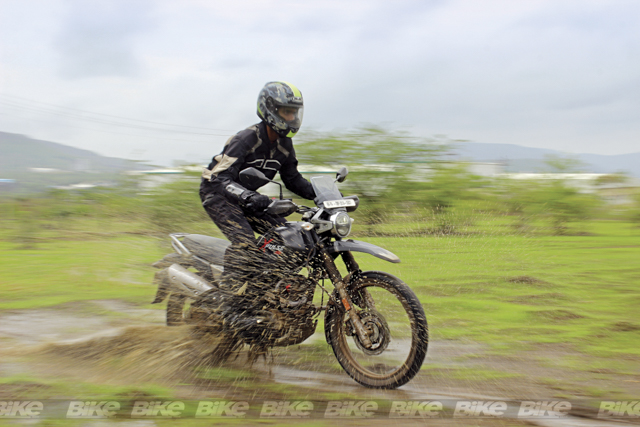 We heard second-hand Impulse hunters were flocking to dealerships to get their hands on the Xpulse 200. So, we got one to see if it actually fills the void left by the ImpulseStory: Joshua Varghese

In its squeaky-clean avatar the Xpulse radiates an air of a thrifty explorer’s favourite weapon of fun. Look at the stance offered by the 21-inch front and 18-inch rear wheel combination. With its ready-to-take-on-anything attitude, the styling is best described as “retro classic meets off-road practicality”. A retro, round, full-LED headlamp sits atop the long, spindly, gaiter-clad fork. While illumination is just about average, it does contribute to the Xpulse’s personality. The fuel-tank holds 13 litres; that is two more than the Impulse. At about three-quarters of the tank’s length, the seat begins and extends all the way to the tail section. The side and sub-frame panels have a simple design that is more practical than pleasing to the eye. Hero have also done a commendable job by equipping the motorcycle with a bash-plate and a sturdy luggage rack. 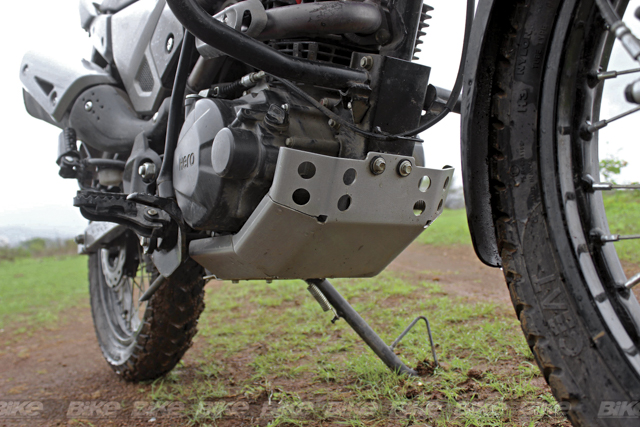 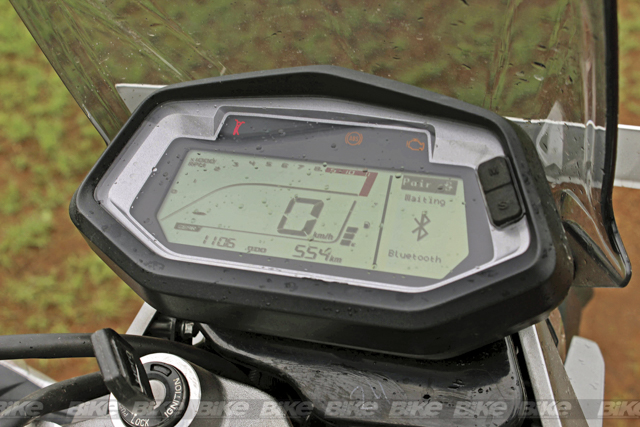 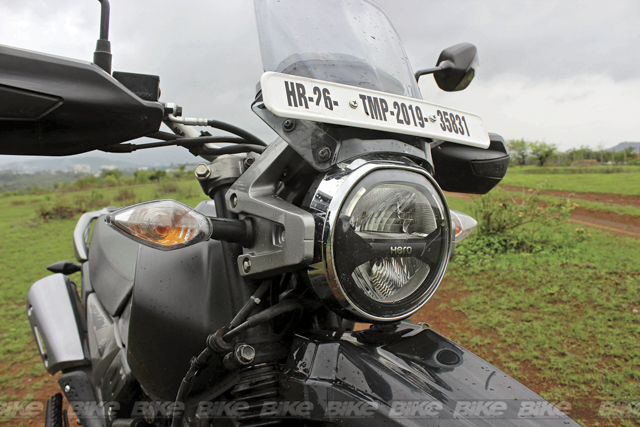 Unlike its predecessor, the Xpulse features a digital console which, in addition to displaying usual tell-tale lights and instruments, is also Bluetooth-enabled. Yes, it supports incoming call alerts and turn-by-turn navigation as well. Oh, and you can charge your phone via an under-seat USB charger.

The rider triangle is nice and upright, a welcome combination offered by the wide handlebar, well-positioned foot-pegs, and saddle height; which, at 823 mm, makes the Xpulse more accessible for a wider spectrum of riders. After spending a considerable bit of time off-road, I found myself wishing the foot-pegs were set further back by an inch or so because it was a bit of a task for me to feel at ease while riding standing up. However, that is a minor niggle that may only bother tall riders. 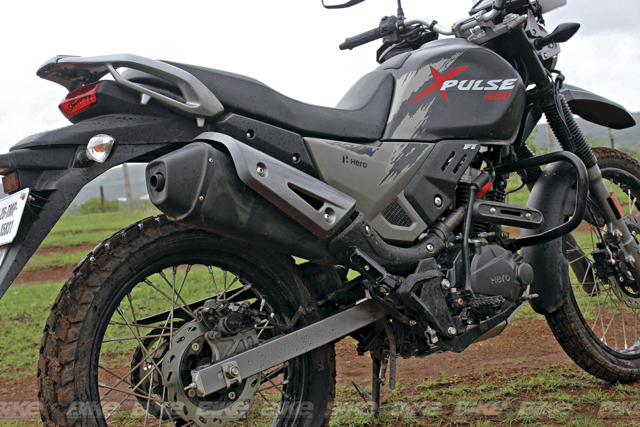 The diamond frame houses the 200-cc, air-cooled, two-valve, SOHC mill that does duty in Hero’s new Xtreme range. The engine features the same state of tune and produces 18.4 hp at 8,000 rpm and a peak torque of 17.1 Nm at 6,500 rpm. A meaty chunk of torque manifests in the upper mid-range and trails away as the revs edge closer to the red-line. The larger 18-inch rear wheel and higher-profile tyre of the Xpulse mean that it has a larger rolling circumference as compared to the Xtreme 200R. To make up for it, Hero have added one more tooth to the rear sprocket of the Xpulse 200 as compared to the Xtreme 200R. This gearing lets you make better use of the engine’s power and torque characteristics from low revs onwards and allows the motorcycle to pull longer in each gear. Keep it in that sweet spot in the upper mid-range and the Xpulse 200 is a joy to ride. We were able to achieve third gear roll-on (30-70 km/h) in 6.99 seconds. The first hint of vibrations creeps in upwards of 7,000 rpm and they become progressively noticeable close to the red-line. For long-distance touring, you may expect to cruise at about 90 km/h (indicated) without being too uncomfortable. 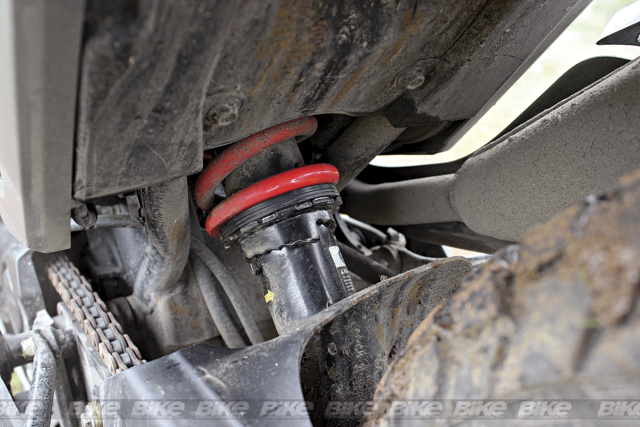 The suspension set-up is undoubtedly the Xpulse’s trump card. A 37-mm telescopic fork with 190-mm travel handles the front while the rear is managed by a 10-step preload-adjustable monoshock with 170 mm of travel. The set-up is on the softer side and soaks in the diversity of the trails effortlessly but it is not so soft as to bottom out when you land a jump. Braking is managed by discs at either end with a single-channel ABS. The rear disc is bitten by a Nissin caliper and, in the right hands, it is a precise instrument off road. In comparison, the bite at the front is softer; which is perfect for the trails, of course. On the road, the softer bite along with the generous fork dive will discourage you from putting too much trust in the front brake. Fret not, though, the ABS will have your back if you need to drop anchor in a jiffy. During our test we managed to come to a standstill from 80 km/h in 2.70 seconds over a remarkable 28.54 metres. 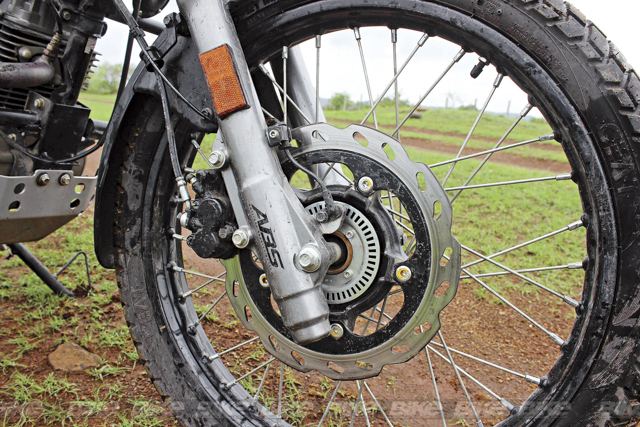 My route to the best part of this test ran through highways, city roads, and some twisties. In the city, the Xpulse shone in terms of manoeuvrability but it impressed us most with how it tamed poor roads. Potholes that usually split traffic like Moses split the Red Sea were treated to a royal slap in the face as the Xpulse rode right over them without breaking into a sweat. On the highway, the Xpulse was not as exceptional. It was fairly well-behaved and ran along comfortably when kept in its sweet spot; which is a fairly decent 90 km/h in top gear. On the twisties, the bike certainly delivered what was expected of it. Due to its soft suspension, large front wheel, and off-road-biased steering geometry, the Xpulse is not quick to turn into a corner; it requires firm and smooth rider input. The good news is that once turned in, it holds the line well without fuss, ably supported by the CEAT Gripp XL tyres. 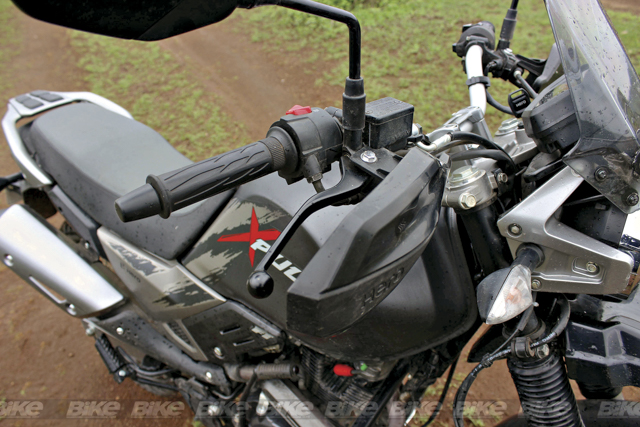 Until now, the Xpulse has behaved like a jack of all trades but this motorcycle’s mastery begins where the tarmac ends. Never have I ever been so eager to get a motorcycle dirty. The motorcycle’s well-balanced weight, linear and predictable throttle response, long-travel suspension, and versatile rider triangle threw open a world of possibilities, encouraging me to go all out and have fun. Rocky trails were traversed without difficulty, jumps were performed with confidence, and puddles were splashed through with glee. Sliding the Xpulse around under normal conditions does require a certain level of skill because the engine does not have the grunt to support such hooliganism. So, I introduced it to a grassy field filled with slush. With traction considerably reduced, it was easier to get the tail out. Holding it there and drifting around was also easy thanks to the linear throttle response and light feel at the clutch lever. 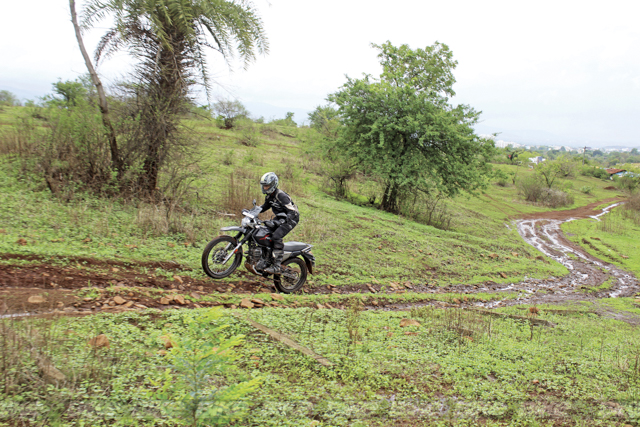 There are a few things that could have made the Xpulse exceptional instead of great. Like the Impulse, the Xpulse also feels like it could have handled a more powerful engine and that would have definitely made it irresistible. Pillion comfort is decent for short rides but the small seat and heat from the exhaust may be enough reason for them to consider taking the bus for long trips.

The Impulse was, perhaps, too early for its time and was certainly appreciated more after it was discontinued. Today the situation is different: more motorcyclists have begun riding for leisure and there has been a noticeable rise in the number of off-road enthusiasts as well. The Xpulse 200 has filled its predecessor’s shoes well and also carries a certain charm of its own that gives you more confidence off-road. It invites you to wring the throttle, move in closer to the tank, and tackle corners in a motocross-inspired fashion. Or you can pick a trail and just go exploring. Either way, definitely a lot of fun.

With a price tag of Rs 1.05 lakh (ex-showroom), the Xpulse is fairly well-priced and has the spotlight all to itself in its segment, its closest competitor being the Royal Enfield Himalayan which costs an additional lakh of rupees. 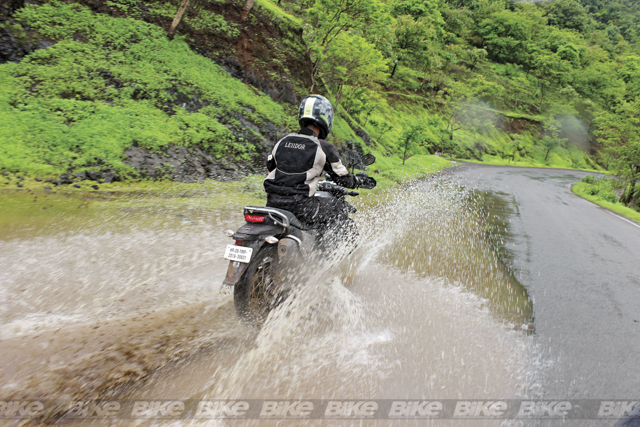 ‘Fun. Sheer fun. That’s what it was,’ I told myself as I rode back to town on an extremely dirty Hero Xpulse 200. Generously smeared with mud myself, I was also far from presentable. Furthermore, my shenanigans had let an uncomfortable mixture of water and mud into my boots. On a normal day, I’d be itching to get back to the comfort of my home but not that day. I was actively considering turning around and going back to the muddy trail I just bid goodbye to. Would I buy a Hero Xpulse 200? After the kind of fun I had on this motorcycle, I am definitely considering it.