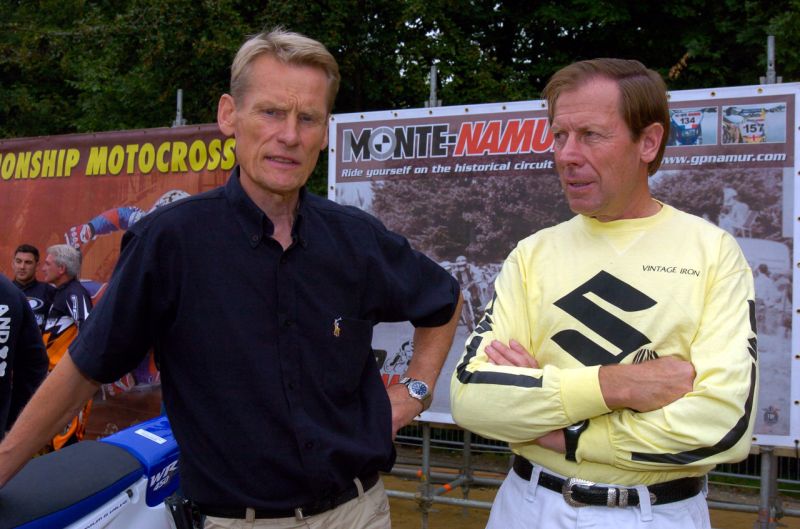 The genesis of mono-shock suspensions and how Yamaha seized it!

Mono-suspension systems have become something of must-have for a performance oriented motorcycle now-a-days. Right from the first Unicorn back in 2005 to to the R15s, FZs to the more recently launched Gixxers and KTM duos. The benefits of the mono-suspension over traditional dual shocks have been largely argued upon and the scales tip in the direction of the mono-suspension. The strongest point in favour of the mono-suspension is the reduction in weight over traditional dual suspension systems. More importantly, the dual shocks failed miserably in the extremely demanding off-road arena. Adding more stiffness and travel to dual shocks required the addition of more metal, resulting in increased unsprung weight – which is not exactly the way to go racing. Secondly, the compression, damping and rebound settings between the two struts would invariably be different which made competitive off-road riding tad unpredicatable. The development of the mono-suspension is yet another golden page in the colourful timeline of motorcycles. Here is how it all came in to being.

Back in the late 1960s and 1970s, Lucien Tilkiens was a prominent figure across the motocross scenario in Belgium. Not only was he a formidable rider, but also a designer and engineer. In addition to manufacturing industrial steam cleaning machinery and water softening devices, he was also a lecturer at the Mechanical Engineering department at the University of Liege. Being a popular figure in the motocross circuits he is known to have assisted riders in fabricating special parts.

A chip off the same old high octane block, Lucien’s son, Guy Tilkiens took to racing and crashed the 380-cc CZ in his father’s presence. Having observed the accident closely, Lucien noticed that the rear-wheel kicked back dramatically and force from the rear wheel could not be dissipated to frame. Having reached to the conclusion that the near vertical mounting of the strut was preventing the force dissipation, he set about designing a system that would transmit this force along the frame and to the steering head. Armed with mechanical ability and a fabrication set-up at disposal, it was not long before a new chassis was developed to accommodate a long-travel damper that was centrally mounted between the swing arm and the steering head. This would be the first mono-suspension ever. Lucien’s vanguard developed the system over the 1972 season and Guy’s feedback played a pivotal role.

Following this, Lucien made the right phone calls and got the bike to the Mol circuit where the Suzuki duo of Roger De Coster and Sylvian Geboers tested it. Roger and Sylvian reported to Suzuki Engineer, Tamaki positively about the mono-shock CZ. In fact, they also claimed to be faster than the works Suzuki in the rough patches despite CZ’s weight. When asked if he would build the system for Suzuki, Tilkiens readily agreed to selling the idea to the factory. He also set about building the mono-shock Suzuki, emphasising on transferring the forces towards the steering head. Suzuki’s tech boss, Tamaki who was present at the tests argued that there was no reason why Tilkien’s design was better only because of the direction of travel. Although the system worked, Tilkien was unable to prove it on paper as to why the system was better. Suzuki insisted on a mathematical proof of the goings-on on the track. In retrospect, Roger acknowledged that Tamaki’s arguments were not completely baseless. What was not taken in to consideration at the time was the 50% increase in the suspension travel, Tilkien’s ability to adjust the damping and the excellent craftsmanship of the system. Suzuki mulled over the proposal and went about its business without any serious consideration. Around the same time, Yamaha works rider, Katsuhiko Sao, was joined by the team’s development engineer, Toshinori Suzuki, on a racing trip to Europe. Toshinori who held the suspension systems of the day in poor regard was more than interested when presented with Tilkien’s design. He also reported that Guy’s Suzuki looked similar to the ‘secret’ Suzuki that was being developed in Japan. Things moved quickly at Yamaha and the Yamaha trio of Nackamura, Kuratomo and Tanaka travelled to Belgium to conduct the negotiations with Lucien. In light of the situation, Tilkiens and Yamaha allowed for another week for a response from Suzuki. Suzuki showed no further interest and the system went to Yamaha. Unsurprisingly, a team from Honda was also arrived at Lucien’s country house who were politely told that they were too late. 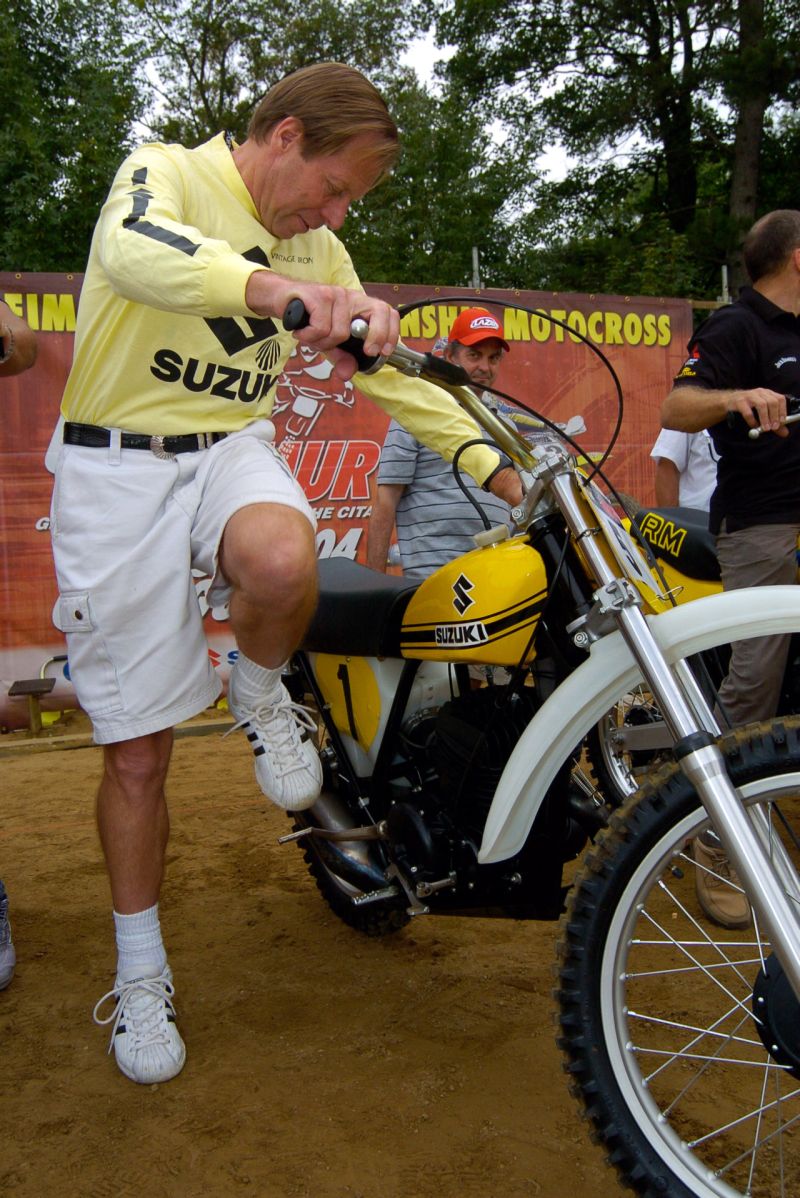 Subsequently, Yamaha protected the system with an arsenal of 30 patents covering the chassis design, the damper, and the method of mounting. Following this and a full factory backup, Yamaha dominated the 250-cc class of the 1973 season with an iron fist, and Hakan Andersson went on to win the championship. His victories in the 1973 season brought Andersson and Yamaha their first motocross world title. To what percentage Yamaha attributes that victory to the system is a debatable issue, but one cannot deny the fact that Lucien’s design and Yamaha’s factory support led to the entire grid switching to mono-shock systems by the end of the 1973. The design had single-handedly rendered the dual shock out of contention and most off-road bikes since 1973 have turned to it. The system eventually trickled down to Grand Prix racing bikes like Yamaha’s 1974 YZR 500 OW20 ridden by Teuvo Lansivuori. The 1975 bike was revised to OW26 for Giacomo Agostini who went on to clinch his eighth and final premier class title. By 1976 the factory built the OW31 TZ 750 which were mounted with triangulated swing-arm. Prior to this, the major development in motorcycle dated back to the 1940’s with dual shocks taking over the industry. 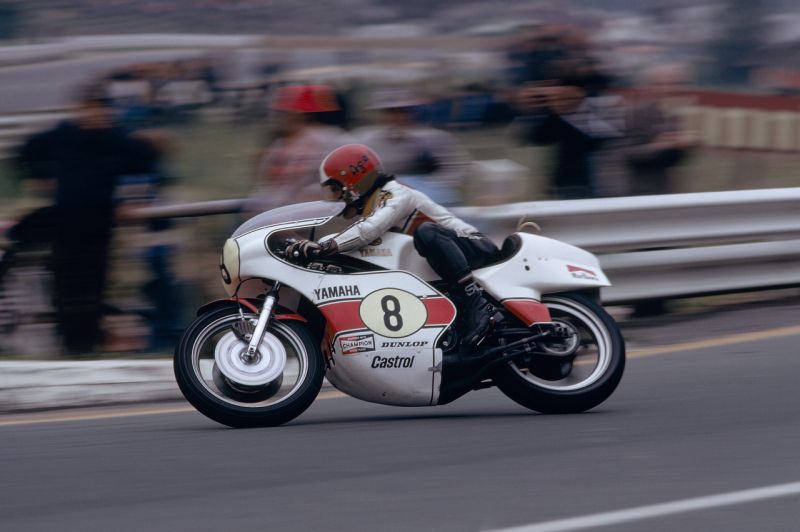