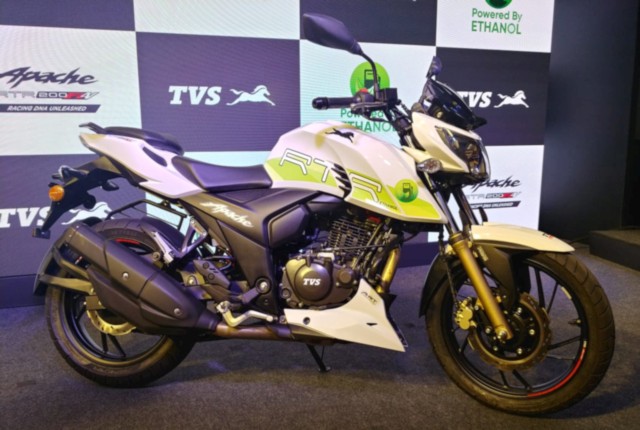 The TVS Motor Company has introduced an unconventional variants to the Apache ranks – the E100. The TVS Apache has been quite the success for the Chennai-based two-wheeler major, seeing 150-cc, 160-cc, 180-cc and even 200-cc versions, with a number of variants between them sporting everything from dual discs and ABS to fuel-injection. Now, though, with the E100, the company has taken a bold step forward to a greener future. 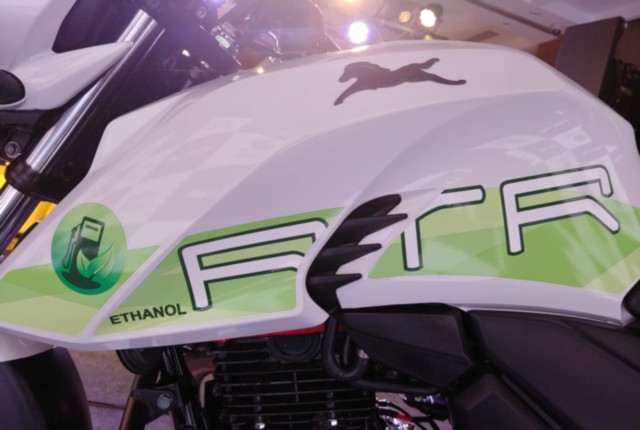 The TVS Apache E100, or the Apache RTR 200 Fi E100 to take its full name, is easily identified thanks to its distinct white paint finish with green graphics incorporating the ethanol logo. The 200-cc four-valve single sports twin-spray-twin-port electronic fuel-injection technology for better driveability, faster throttle response and reduced exhaust emissions. It makes 21 PS at 8,500 rpm and a peak 18.1 Nm of peak torque at 7,000 rpm with a top speed of 129 km/h, putting it in the Class 2-2 of the emissions norms two-wheeler classification. One point to note is that it cannot run only on petrol. There must be a percentage of ethanol as well. TVS say the ideal mix is 80 per cent ethanol to 20 per cent petrol, but the E100 can run, as its name suggests, 100 per cent ethanol as well. The use of ethanol fuel results in an increase of about 10 per cent in peak power and about 5-6 per cent more peak torque as well, apart from cleaner exhaust emissions. This is because ethanol, apart from being non-toxic, biodegradable and safe to handle and transport, is an oxygenated fuel with 35 per cent oxygen. However, it must be noted that ethanol is temperature-sensitive and its usage depends on a number of factors based around that aspect. 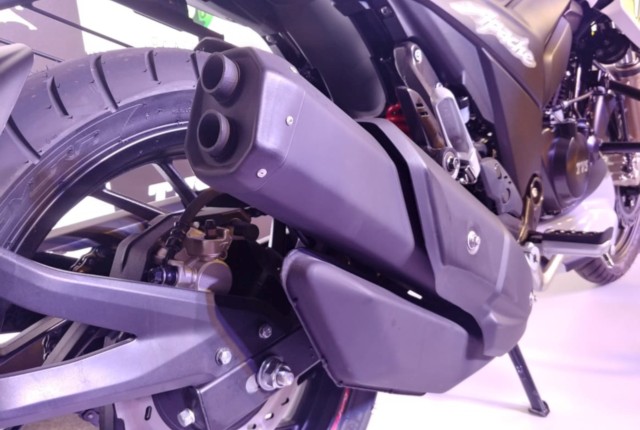 The TVS Apache E100 is initially being made available in Maharashtra, Karnataka and Uttar Pradesh. Ethanol fuel is widely acknowledged as a renewable fuel because it comes from sugarcane, which is widely grown in several areas especially parts of Maharashtra. While ethanol-blended petrol to the tune of five per cent has been available for a while, the authorities had not given permission to put up ethanol pumps, and are now said to be considering this prospect. This will give farmers the chance to locally produce ethanol. The cost of ethanol fuel will be almost 40 per cent lower, pegged at between Rs 50-55 a litre. It is also being used in several other countries and, as such, points to export growth as well.