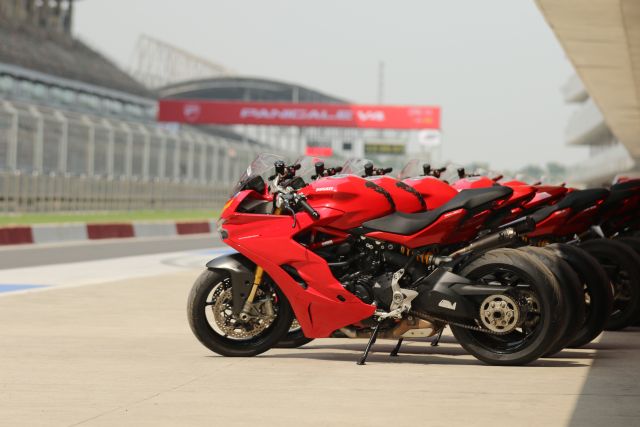 Ducati Riding Experience (DRE) events are held at racetracks across the world and provide Ducati customers a place to come together with their machines and immerse themselves into the brand they love for a weekend. Ducati have taken note of the fact that India is proving to be one of the fastest growing markets for premium motorcycles and organized the first-ever Indian DRE this October for the growing number of Ducatisti here. I was overjoyed to see an invitation to this event in my inbox and was soon on a flight to Delhi. 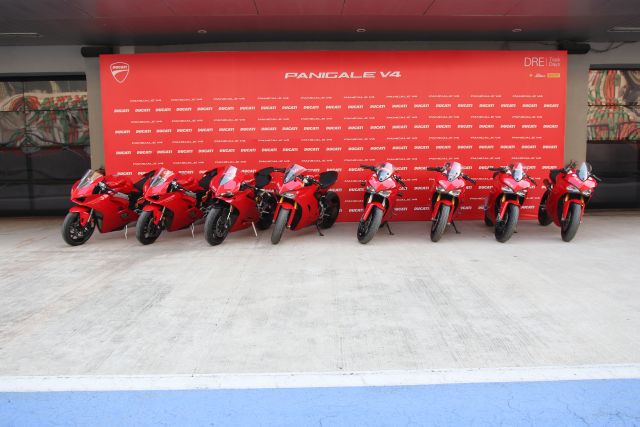 The venue for this flamboyant event had to be India’s premier racetrack, Noida’s Buddh International Circuit, and the event was open to Ducati owners and non-Ducati owners alike. Ducati use these events to get their latest motorcycles through to existing as well as prospective customers and, apart from bringing their own bikes to ride at the circuit, the participants also had the option to do a few laps on the Supersport, 959 Panigale or the mighty Panigale V4. Apart from the motorcycles, those present also had the opportunity to interact with Sergi Canovas, Managing Director, Ducati India, and get riding tips from Ducati’s chief test rider, Alessandro Valia, the man behind the development of the company’s flagship motorcycles, the 1299 Panigale and the Panigale V4.

Entering the circuit on Saturday morning, the energy around me was palpable. Everywhere I looked was another Ducati motorcycle; everything from Scramblers to Multistradas to Diavels and even a Hypermotard were present. Inside  the pit garages was a sea of red — assorted Bologna hardware was scattered around, including Supersports, 959 Panigales, a few 1098s and 1198s, Panigale V4s, and even the sole 1299 Superleggera in India, all waiting for their owners to take them out for a few laps on the track.

The early part of the day was dedicated to track time for Ducati owners while I sat down with the rest of the media persons for a briefing with Sergi Canovas and Alessandro Valia. Canovas started by welcoming us to the event and shared Ducati’s aggressive plans for the Indian market. Then Valia took over to give us a few tips on riding Ducati’s most aggressive sport bikes at the racetrack. He also gave us a rundown on all the technical features of the Panigale V4, including the futuristic electronic safety net that allows even novice riders to tame this 219-PS beast without crashing. 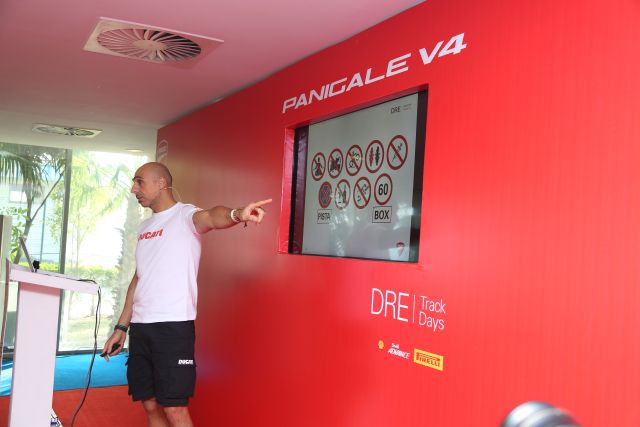 That afternoon we witnessed as Alessandro Valia made history at the Buddh International Circuit by setting the fastest lap on a production motorcycle. He clocked a 1:56.316-second lap aboard a Panigale V4 S shod with slick tyres and otherwise in stock trim and on a circuit he had seen for the first time barely 24 hours ago. 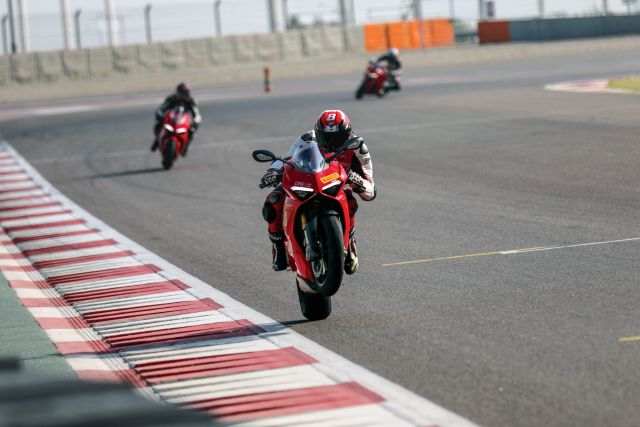 Soon it was time for me to suit up and I headed out of the pit garage to the 959 Panigale that I would spend 20 minutes with before moving on to the V4. It was an awesome experience as we tailed Valia and DRE instructor Carlos Bulto Serrano around the track. After a few laps, I was well and truly in the zone, waiting to get aboard the larger Panigale. A five-minute break to drink water and switch machines and I was back out on the track, this time on the flagship Ducati sport bike and the most powerful motorcycle I had ever ridden. 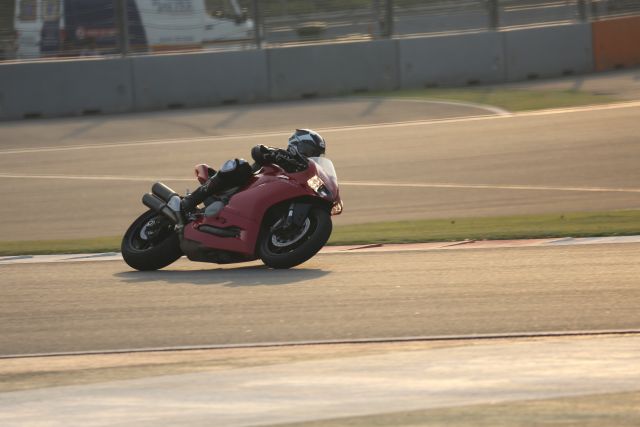 I stayed close to the lead rider and, as we turned the third corner on to the long straight, I rolled the throttle all the way open and was greeted by a vicious bark from the exhaust, accompanied by savage acceleration as the digital tacho needle headed towards the red. The Panigale V4 delivered shocking acceleration through each gear and, by the time I shifted from fifth to sixth, the speedo was already reading in excess of 290 km/h. The numbers flashed up faster than I could react — 294, then 297 as I glanced forward and back down to see the speedo display simply a mysterious “—” before rolling off the throttle and getting on the brakes for the fourth corner. 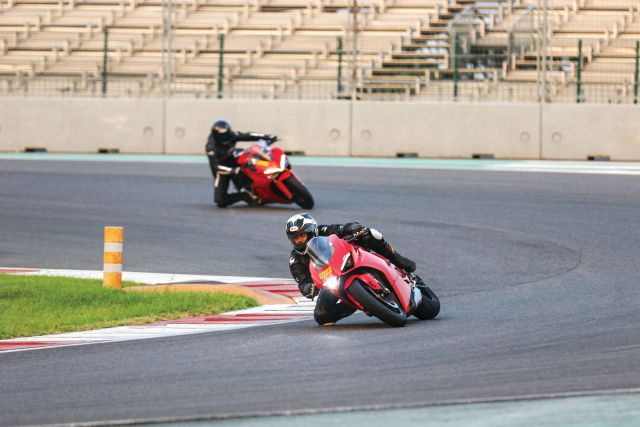 Even with all that power, the electronic suite on the Panigale V4 manages to smooth out your every input, making you feel like a better rider than you really are and I had a blast braking late into corners and getting hard on the gas at corner exits, while feeling perfectly safe on this one-of-a-kind motorcycle.

The day soon drew to a close and all of us satisfied bikers sat down to discuss speeds and lean angles, promising one another that we would be present at the next DRE track-day event. Ducati did a great job setting this up and I can’t wait for the next one! 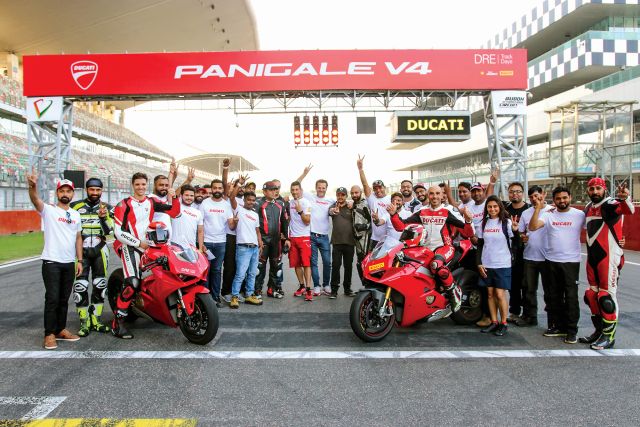