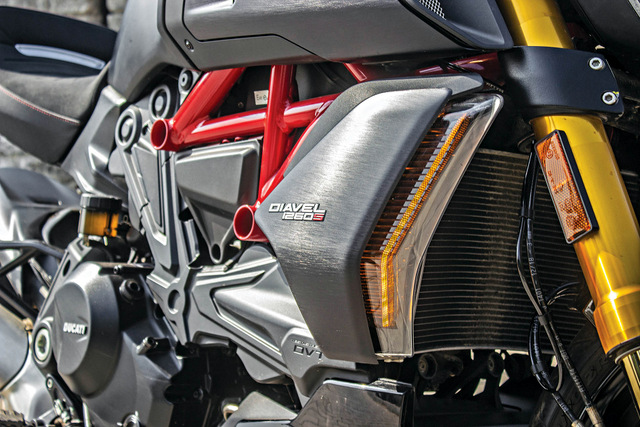 That bulging headlamp unit with  the slick DRL, those svelte vertical indicator bars borrowed from its parent brand with the Four Rings, the intricate detailing in the back seat, the seamless tail-lamps and integrated turn indicator, and that delectable wheel design, fully on show thanks to the single-sided swing-arm, are all indicative that this might not be your average mile-muncher. And if you need further proof that those haughty Italians have every reason to scoff at the cruiser tag, well, there are other visual cues too. For instance, the suspension. The prominent golden 48-mm USD forks have the word Öhlins etched into the bottom and fully adjustable kit it is too. The same goes for the monoshock. And then there’re those Brembo monobloc M50 calipers and a six-axis Bosch IMU. That’s sports bike kit on what is supposed to be a straightforward devourer of distances. So, it looks like a cruiser at first glance, but a closer look reveals that occult forces brew beneath the surface. 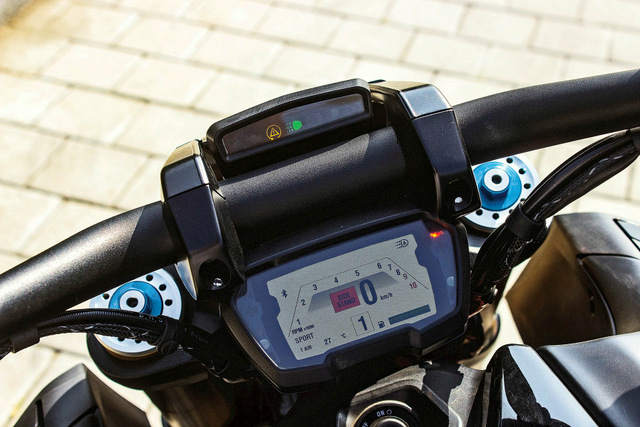 The expansive kit offering extends to the full-TFT info cluster too. There are four different layouts to pick from. One is a default set-up and there are three more based on the riding mode you set up the bike in. The modes themselves are Sport, Touring, and Urban. The riding modes let you play with traction control set-up (eight levels), degree of ABS intervention (three levels), level of wheelie control (eight levels) — everything. And you can fully adjust the pre-set modes to suit your fancy. All of this can be done extensively at a standstill using the accompanying switchgear which gets a menacing red backlight. You can also switch through the modes on the fly and you can even hook up your phone to the screen via Bluetooth and the Ducati app and manage calls, sort your music out, and more. There’s another important use for the switchgear — to engage cruise control. How much more cruiser can you get? You even get launch control as part of the electronics suite. No, seriously. Called Ducati Power Launch EVO, this system comes in three levels based on how aggressively you want to set off. Engage it, clutch in, whack open the throttle, and let go. The electronics take care of the rest, controlling throttle response to give you the optimal drive off the line. Clearly, this bike has got a little more tech than your average cruiser. The mystery of the Diavel’s identity deepens. 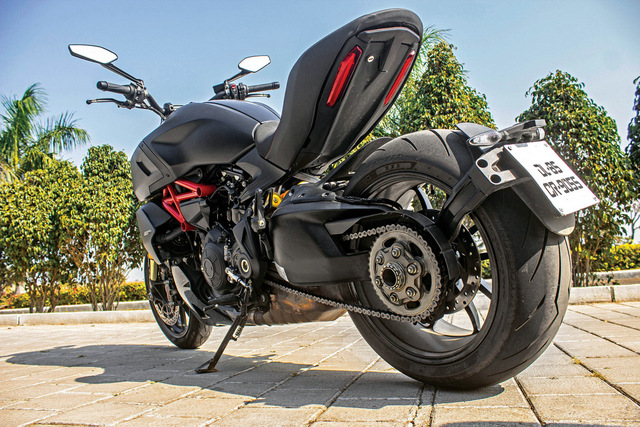