As I swung my leg over the bike, the first thing that struck me was the seat height (830mm, 5mm taller than the 1199’s). I fired up the pleasantly gruff-sounding motor, selected first and let out the light clutch and exited the pit-lane on to the racetrack. The track was perfect with 32ºC ambient temperature and dry conditions. After a couple of sighting laps, learning the line and braking points, it was time to see what the 899 had in store for me.

The first double apex right-hander is a second-gear corner, and by the time you exit, still laid over but shifting up to third and fourth flat out through turn three before braking hard for turn four and down to second, then it is full throttle through turns five and six in fourth before braking hard and back to second for turn seven, the slowest corner on this circuit.

Accelerating hard through turn eight and up to fourth and back to second for turn nine, then flat out through turn 10 in third, then it is fourth before hitting the anchors hard and back down to second for turn 11. As you exit turn 11, it is flat out all the way through turns 12 and 13, up to fifth, before shifting back to third for the last corner (14). Powering through the last corner with the throttle wide open, the RPM reading 10,000 and the upshift lights flashing to tell you it is time to shift to a higher gear, and shifting up to sixth down the start-finish straight and the digital speedo reads 245 km/h. In the afternoon session I had the opportunity to ride the bike in Race mode and a slightly stiffer suspension set-up. In Sport mode the bike tends to be more rider-friendly where the ABS kicks in on the rear brake and the bike is in greater control under heavy braking and also during hard acceleration. In Race mode there is no ABS on the rear wheel, so the rear wheel locks up, and starts hopping under heavy braking. On the acceleration front, you feel the rear wheel squirming around under hard acceleration and the bike feels more like a race bike in Race mode.

The 899 delivers everything that Ducati wanted the bike to deliver. The slightly raised handlebars make for a nicer riding position, the 180/60 R17 makes the bike more agile and easy to change direction. The engine is a refined unit, the gearshift very nice and, thanks to the quick shifter, it is a delight to use. The 899 is a perfect bike for an average rider like me as I can extract more or less all its performance compared to the 1199, which is more suited for track use and for riders with exceptional talent. It is like the 911 Porsche and the Cayman, the latter being much easier to drive. 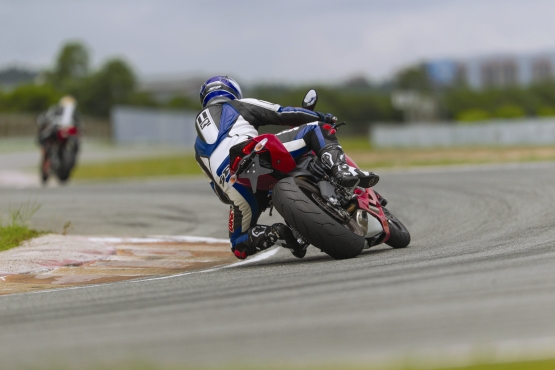