We’ve waited exactly for a year to get our hands on the Classic Legends Jawa for a road test. Has the wait been worth it? 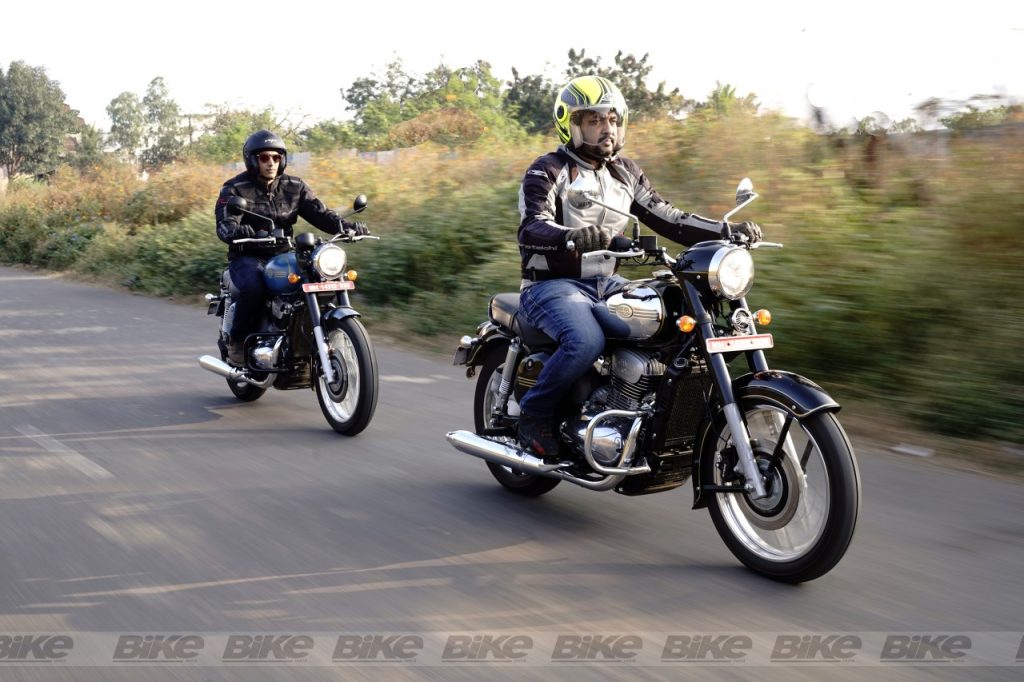 The resurrection of Jawa has made the long-time fans highly excited. Even the slow production and delayed deliveries haven’t dampened their enthusiasm as they wait patiently for the bikes to arrive in dealerships. We were patient, too, as the pre-production Jawas we rode in December 2018 still left plenty of questions unanswered. And here we are hoping to find those answers as we spend some time riding around the Jawa Jawa and Forty Two. 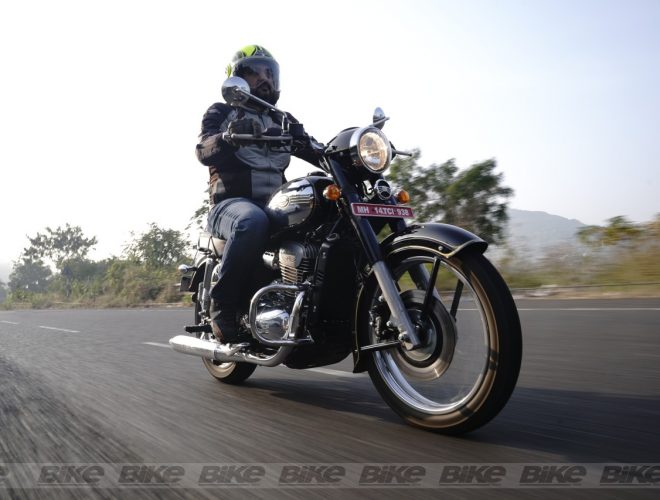 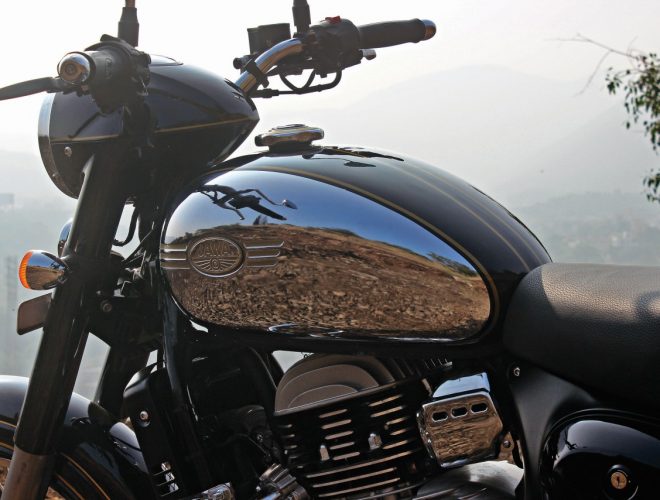 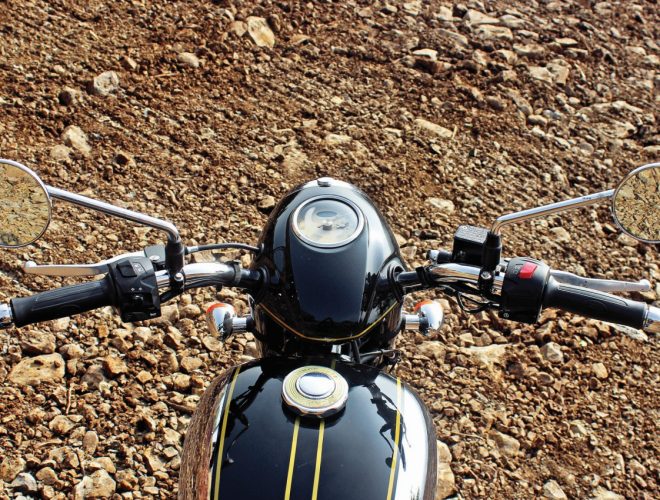 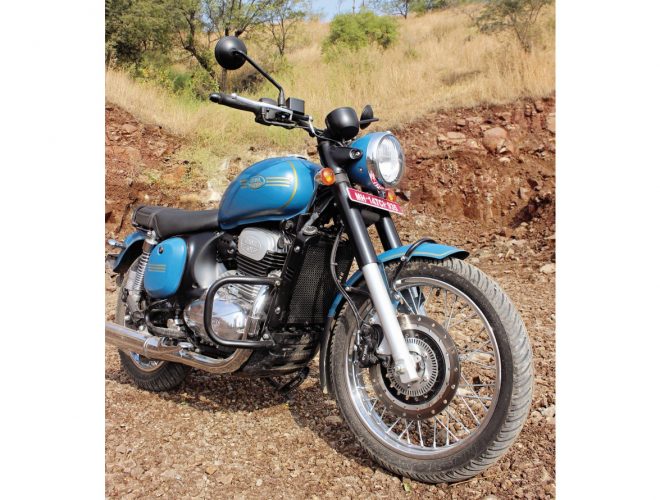 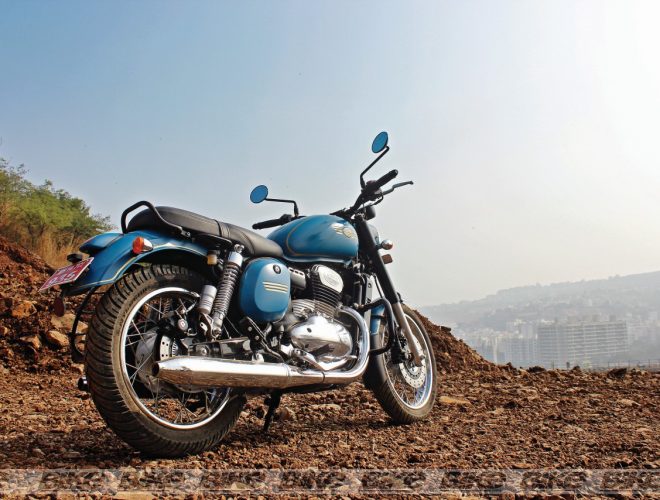 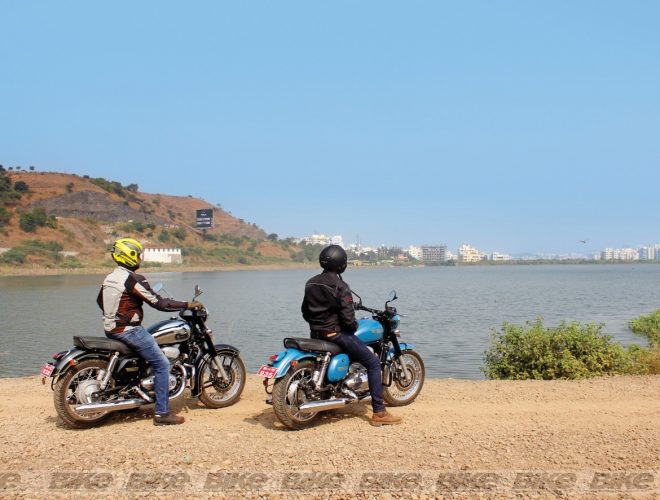 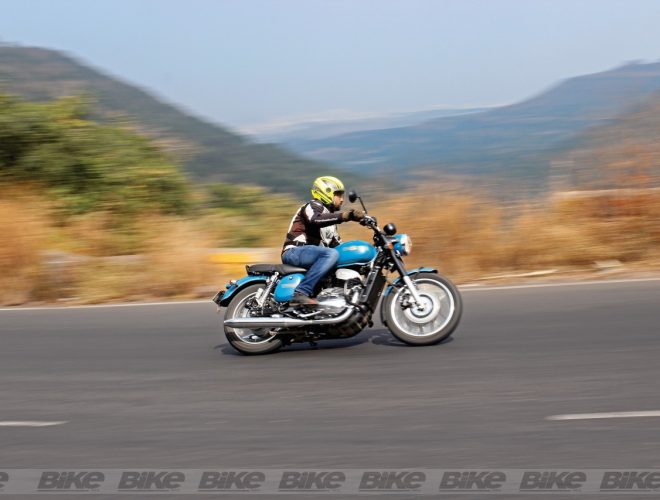 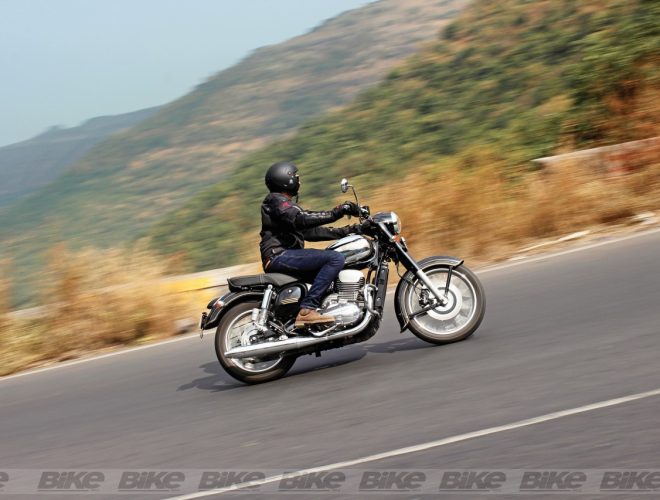 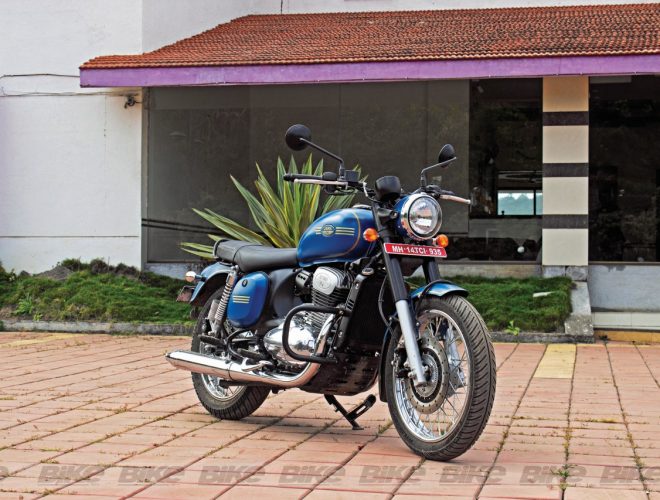 The folk at Modern Classic have managed to recreate the iconic stance with the new Jawa: right from the teardrop-shaped headlamp that overlaps part of the handlebar, the chrome-finished fuel-tank with retro style filler cap to the side-panels look the same but are plastic now and even the circular instrument console sports needles that point towards the rider… all true to the original Type 353 model.

The Forty Two is a more modern version of the bike, aimed to appeal to the millennials who haven’t seen the old Jawa when it was at its peak. This version looks more conventional with its round headlight, basic fuel-tank, a smaller front fender and an off-set instrument console. And you get a more commanding riding position due to the wider handlebar. This version goes easy with the chrome and gets trendy matte-finished paint schemes. Both the siblings come with 280-mm front disc, but the Forty Two we tested also gets a 240-mm disc at the rear and boasts of dual-channel ABS. Besides that, both are mechanically the same and feel almost identical to ride. Overall, the finish level on both the siblings is good, apart from a few minor aspects where there is scope for improvements, which we shall mention later.

You’ll appreciate the low saddle height of 765 mm, which, along with the surprisingly lightweight of 170 kg, makes the motorcycle very manageable for practically everyone. Riding around town, you’ll notice that the saddle has poor cushioning and one can feel the metal plate beneath it. Longer rides on the standard seats will literally be a pain. While riding the Jawa, some of the digits at the lower part of the speedo remain out of sight even for taller riders. This isn’t the case on the Forty Two, though, thanks to the more angular position of the instrument cluster. Both the consoles give out basic reading and miss out on things such as a trip meter or side-stand indicator which are now available even on commuter motorcycles. 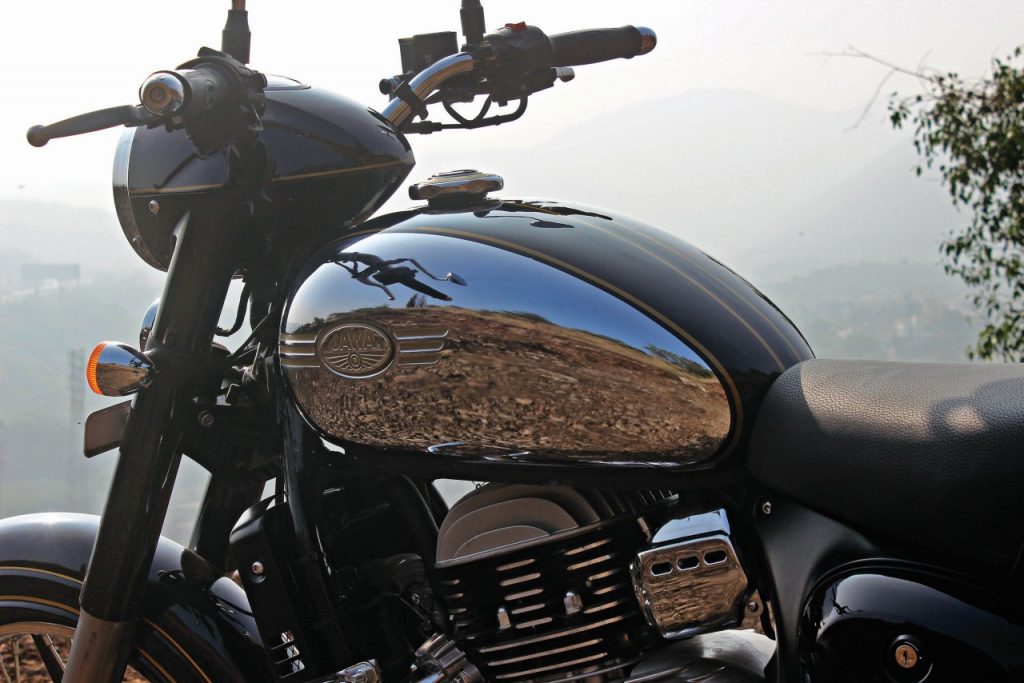 Back in the day the Road King, in spite of the single-cylinder engine, had one exhaust port which splits into two bend pipes and silencers (original Jawa had two ports). An interesting bit of trivia here is that Rustom Hormazdji, who was a vital part of the R&D back in the 1970s, defended the single-cylinder twin-exhaust styling by comparing it to a woman. He was often quoted as saying, ‘how would a woman look like with just one bosom?’ The design might seem more aesthetic to hardcore fans but one can’t ignore the waste of material and the additional cost it brings along.

Nestled in the double-cradle frame is the beautifully crafted 293-cc liquid-cooled single which has been derived from the Mahindra Mojo engine. The engineers came up with the new dual exhaust system that starts from the two engine ports to merge into a collector box positioned under the bike before splitting again into the distinct looking pipes. Visually, they do look the part but it’s practically impossible to match the crisp beats of a two-stroke with the stringent modern-day norms. Not surprisingly, the new bikes have a nice deep exhaust note similar to the Mojo.

To improve the engine characteristics and match the old-school external form, Classic Legends hired internationally renowned engineers to help tweak this engine. After altering the cam profiles, including new valves and fine-tuning the ECU, they did manage to make it more relaxed than the Mojo. The low-end power has been improved and mid-range has become more pronounced now. The Forty Two takes less than a second to reach 20 km/h and hit 60 km/h in 4.5 seconds, with the engine purring away smoothly, which makes it apt for city use. The throttle response is linear and predictable, which makes it a friendly bike to live with.

As you rev harder, the vibrations become evident in the handlebar and foot-pegs, making you shift up through the gears to sixth. Going all out, it took 13 seconds to complete the 0-100 km/h run and it maxes out at 124.78 km/h. Interestingly, the fourth gear has most of the juice offering strong acceleration, while the final drive ratios have been modified to aid rideability. Our roll-on tests clearly drive this point home. The 80 km/h to zero braking time of 2.67 seconds is impressive but you need to apply plenty of pressure on the lever for it to deliver.

Back in the ’60s and ’70s, a major reason for Jawa’s popularity was the two-stroke’s peppy yet easy-going nature. This is difficult to recreate using the Mojo unit which was designed for a bike with a completely different character and segment. Although the Jawa makes most of the power at much lower revs than the Mojo, it lacks the distinct retro bike feel, one with a heavy crank that allows riders to cruise at 60 km/h even in top gear.

Ride and Handling
Back in the day, a Jawa was instantly recognised by its tall front and low rear stance. This has been well executed by Classic Legends, employing a relaxed 28-degree rake and shorter rear suspension. The front fork dives substantially during braking or while going over broken road. While the limited travel makes the rear shocks quite stiff in contrast. The soft front and firm rear make the setup a bit of mismatch. The ride isn’t the most plush and the firm rear becomes obvious while negotiating broken roads. Having said that, both the bikes will surprise you with their ability to tackle some off-road thanks to the good ground clearance. 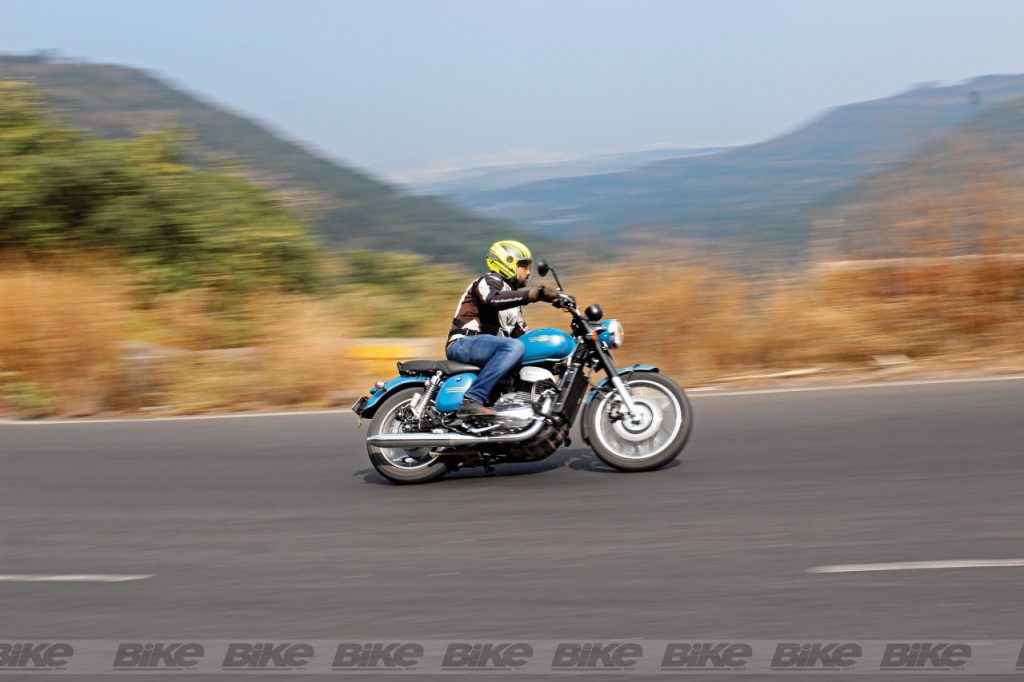 While the old bike ran 16-inch wheels, the new Jawas complete the stance with an 18-inch front wheel and a 17-inch rear one. When you snake through traffic, the larger front wheel becomes obvious as it needs a bit more input to turn. Having 17-inchers on both wheels would surely have improved the handling even further and, being a more popular size, owners would’ve had plenty of tyre replacement options. We did throw it around a few sharp bends and the MRF Nylogrip tyres offered a decent grip with not much to complain about. But cornering clearance is a concern if you like to carve corners because of the chunky side-stand.

For a motorcycle company that’s just started out, the first attempt by Classic Legends is laudable. Yes, it comes with its share of high and low points and, of course, there’s scope for improvement. For the price, the bikes don’t offer enough features and there are a few quality and ergonomic issues mentioned earlier. The seat cushioning, for one, needs immediate attention. 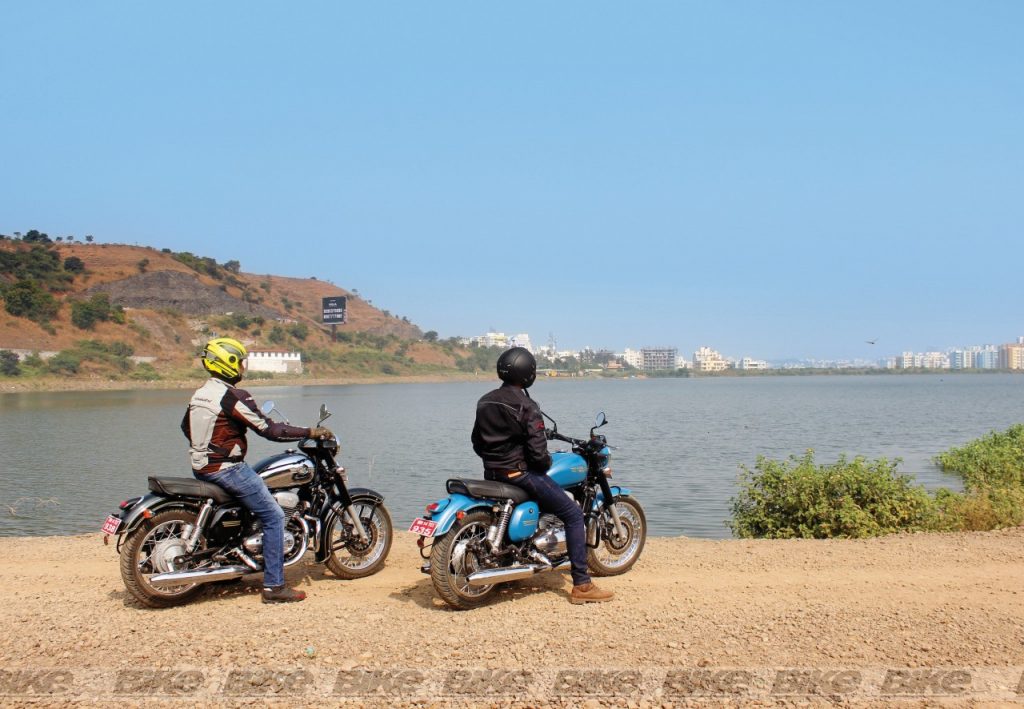 Between the two, the Jawa is the more premium model and demands a premium of Rs 9,000 over the Forty Two (Rs 1.64 lakh, ex-showroom) for the front and rear disc version with dual-channel ABS. And in spite of being more expensive, I feel the Jawa Jawa will tug at the hearts of brand loyalists as it invokes heaps of emotion and nostalgia. It’s a labour of love and one can imagine the owner giving the chrome a gentle polish before riding it to a Sunday Jawa meet.