The name Chetak had been around for so long that it still sends some into a spiral of nostalgia when they hear it. We take a short ride with the modern iteration of that memory. 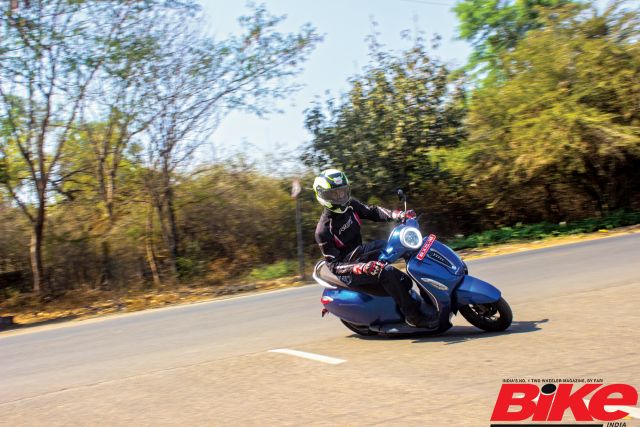 Resurrections are nothing short of dramatic. For reference, watch a few Terminator movies. The iconic Chetak has also returned with a similar ‘I’m back’ vibe but its return is not as loud as Arnie’s guns-blazing entrance. Why? Because the new Chetak is a silent electric scooter with styling and character that is reminiscent of its iconic ancestor. The Chetak of the past was an icon of its time. Your grandparents will be able to tell you about the ridiculously long waiting periods it had back in the day. Will it garner as much popularity in this modern iteration? We took a short ride for a first impression and here is how that went down.

Elegant. Classy. Curvy. I don’t know where that train of thought will take you, but I am on about the Chetak’s styling. A DRL runs along the rim of the headlamp reminding us that this is the 21st century and below that the front cowl has indicators on either flank and an air channel; all highlighted by chrome elements. The designers have not fought shy of endowing the predominantly metal bodywork with curves and these lead the admirer’s eye effortlessly to the rear of the scooter. To be honest, it is refreshing to see such a curvaceous design at a time when most manufacturers are looking at sleek and sharp silhouettes. A neatly shaped sliver of lighting flanks either side of the tail-end and incorporates the tail-lamp and dynamic indicators, quite fancy! To top it off, the exposed wheels on the right-hand side further add to the Chetak’s premium character and road presence. Careful attention will reveal that this scooter does not display any “Bajaj” or “Urbanite” branding. Instead, shapely “Chetak” logos abound on various parts of the bodywork. 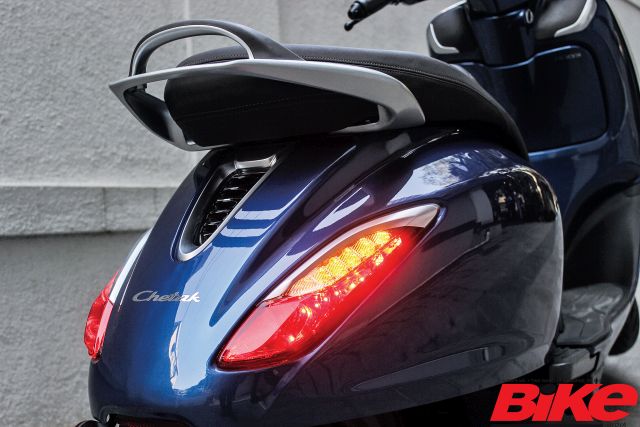 The conventional instrument cluster has been replaced by a digital display enclosed within a satin chrome bezel with a tell-tale surround. Closely spaced switchgear flanks the display on either side and the soft-touch response of the buttons adds to the scooter’s upmarket feel. Similar attention to detail is also evident in the well-contoured seat and its stitching. The riding position is relaxed and the seat is plush enough to seat both rider and pillion in comfort. That is a huge plus for the everyday rider. Like its rivals, the Chetak will also receive a dedicated smartphone app but it was not available for us to test at the time of this first ride.

Power comes from a hub motor that drives the rear wheel through a gearbox (with forward and reverse gears). The motor has a maximum output of four kW (5.4 hp) and produces a peak torque of 16 Nm. Juice for everything on board comes from an IP67-rated three-kWh battery that takes nearly five hours to reach full charge with 80 per cent coming up within 3.5 hours. The charging cable comes neatly packaged within a compact case that fits snugly in the front storage area of the scooter. Thankfully, you won’t have to go hunting for a power outlet or worry about your watchman unplugging the scooter to charge his phone because the manufacturer will set up a charger at a location of your choice when you buy the Chetak. However, fast-charging is not an option at this stage; a mystery that we have not been able to fathom yet. Under-seat storage is fairly decent and it can hold a half-face helmet comfortably. There is storage behind the front apron also; quite useful for holding documents and even to charge your mobile phone. 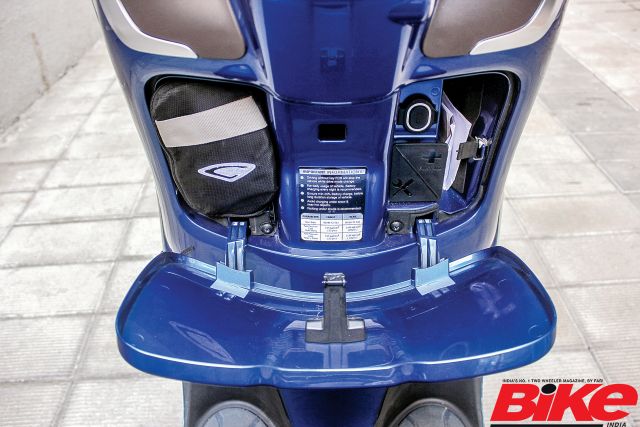 The Chetak receives the distinction of being the only two-wheeler in its segment to feature a key fob. With the fob in your pocket, the push of a button brings this scooter to life. After selecting Drive mode, a twist of the throttle sends it gliding forward. Electric vehicles usually require a careful throttle application to accommodate the instant torque available at the wheel. The Chetak shines in this respect because its throttle response is smooth and progressive without any sporty inclinations and will, without doubt, make the transition easier for someone who is replacing their IC-engine scooter.

The scooter has Eco and Sport modes to choose from with an automatic kick-down feature. While Sport mode can be selected manually, there is no way to stay in Eco through the day unless you use less than 85 per cent of the throttle. Any more than that and it automatically switches to Sport. A loud beep alerts you every time you change the riding mode and it does sound annoying at times. Imagine pulling a few quick overtakes with the scooter beeping away like a microwave oven. See what I mean? 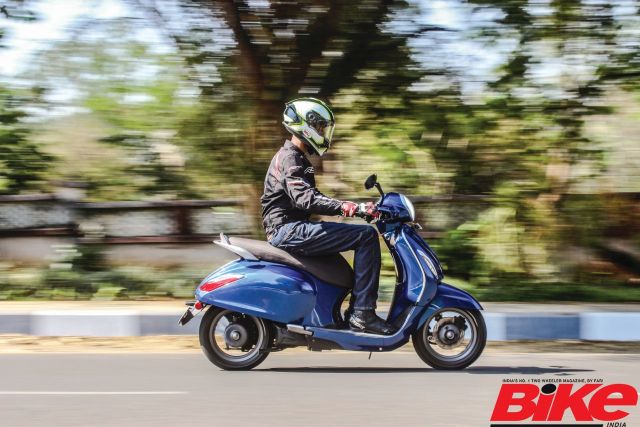 The Chetak claims 95 km of range in Eco and 85 km in Sport. During our short ride, we were not able to verify this claim fully, so we’ll leave that bit for the road test. Nevertheless, we are fairly certain that the scooter will live up to its claim because its battery management system worked reassuringly well and the motor’s performance remained consistent even as the battery got depleted. Considering it has rivals in the market that exhibit a noticeable drop in performance as soon as the battery levels fall, this is a job well done for the Chetak.

Our ride within the city and on some private roads did not reveal any chinks in the Chetak’s armour. Its quick roll-on and usable powerband allowed me to keep up with the traffic and perform overtakes whenever necessary to an extent where I did not feel that I was at a disadvantage due to riding an electric scooter. Suspension at the front is managed by a single-sided leading link set-up while the rear is taken care of by a side-mounted monoshock. The ride quality is noticeably pliant and perfect for our road conditions. The Chetak wafted over irregularities in tarmac with ease and was also quite composed while cornering. Speaking of which, you may want to avoid being enthusiastic when taking left-hand corners because the main stand does limit ground clearance on that side. 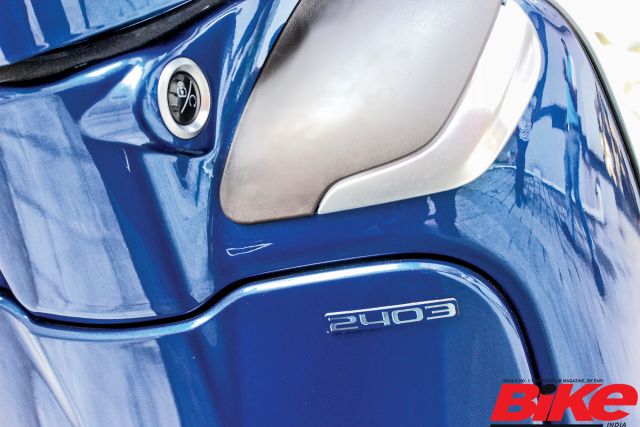 Braking power comes from a disc brake at the front (for the Premium variant only) and a drum unit at the rear, supplemented with the safety of a combined braking system (CBS). Good feedback at the brake levers induces confidence to brake hard and the Chetak is capable of shedding speed in a hurry if it is required to. 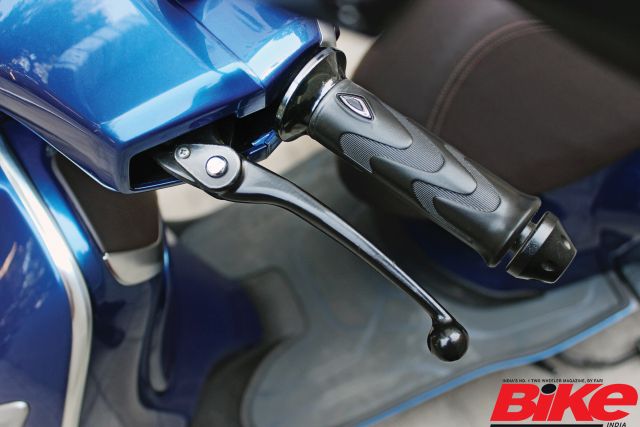 The Chetak you see on these pages is the top-end Premium variant which is priced at Rs 1.15 lakh while the Urbane variant could be yours for Rs 1 lakh (both prices ex-showroom, Delhi). A disc brake at the front, a better seat, and metallic paint differentiate the Premium from the Urbane. 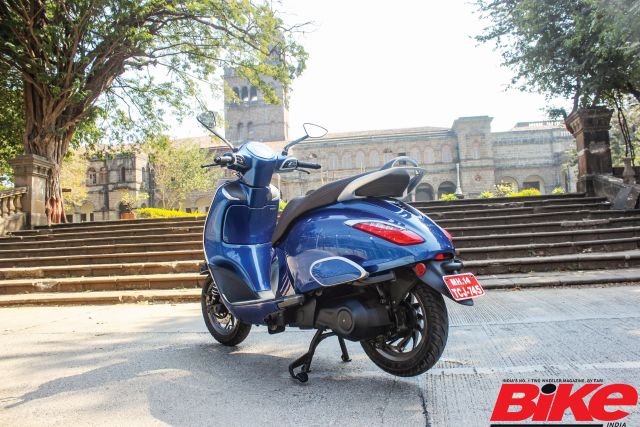 The modern Chetak makes a strong case for itself by providing top-notch quality in a package that is friendly for everyday use. For city commute duties, it could replace your regular scooter overnight and you would only miss your old scooter’s vibrations, noise, and smoke. We feel the Urbane will do the job for most people as a reliable commuter and that you should go for Premium only if you want to add a bit of flair to your daily commute and stand out in a crowd, of course. At the end of the day, the Chetak’s reassuring build quality and impeccable road manners make it feel like a proper scooter and not a glorified toy.