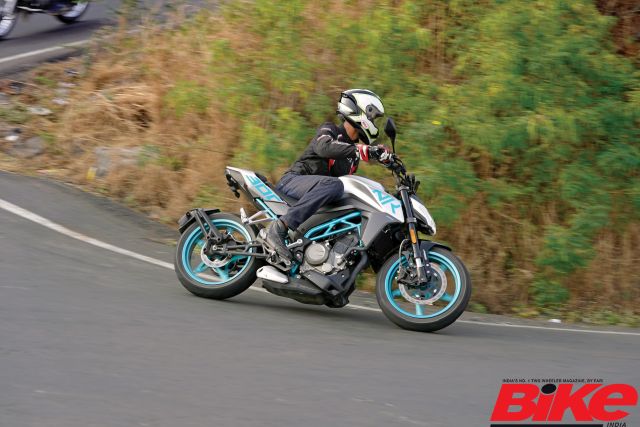 Random strangers approached me during my time with the CF Moto 300NK with queries about the motorcycle and most of the time the exchange went like this:

Stranger: ‘CF Moto? Haven’t heard about them before. Are they new?’

Self: ‘They are a Chinese manufacturer and they entered India about a year ago.’

‘Chinese..?’ Asked most of them; the prejudice on their faces quite evident. Anyone could guess the queries that would follow. In the light of such conversations, I decided to set aside whatever preconceptions I had about China-made products and to experience the 300NK for what it is: a good-looking 300-cc-single street-naked that aims to share the spotlight with the likes of popular manufacturers, including Honda and KTM. 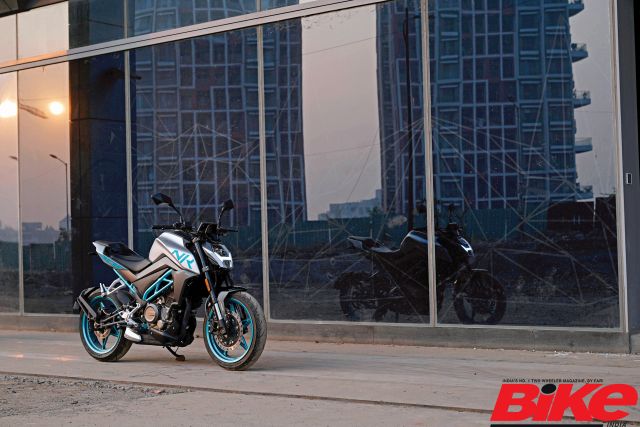 The CF Moto 300NK strikes an eye-catching pose with a radical but also familiar styling. Familiar because a few elements reminded me of some manufacturers’ signature styling and radical because of the way these elements were stitched into reality. A sharp and rather well-detailed headlamp sits atop a beefy USD fork. Above that, a tiny fly-screen guards the display, offering more in terms of protection to the wiring than aerodynamics. CF Moto have paid good attention to detail and it is clearly visible from the lines that project on to the butch and shredded fuel-tank from the headlamp unit. The largest part of the tank shroud proudly displays the “NK” logo in a colour that matches the exposed tubular trellis frame. The same paint scheme is mirrored at the rear of the motorcycle with the exposed sub-frame and the rear cowl while a compact tail-lamp and indicator assembly round off the 300NK’s tight rear end. In this colour scheme, the star-pattern alloy wheels have been painted the same colour as the graphics and it certainly works in the motorcycle’s favour. The only eyesore is the tyre-hugging mudguard, but, I hope, it will negate that blemish during the rain. Overall, the build quality and the level of fit-and-finish are reassuringly good. 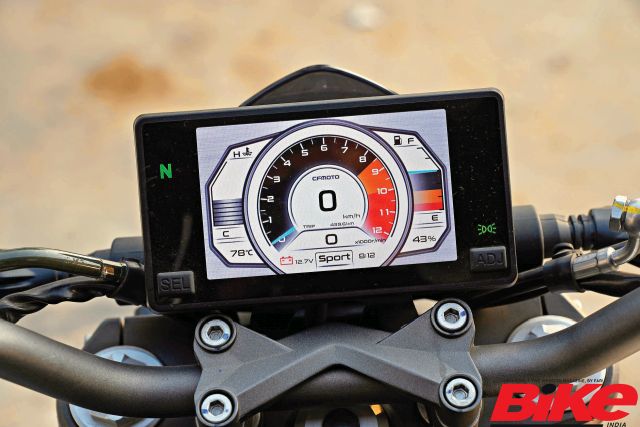 There is no instrument “cluster” per se because all the information is relayed to the rider by a light-sensitive colour TFT display surrounded by tell-tale lights. In addition to an odometer, tachometer, and two trip meters, the console also displays coolant temperature, time, battery voltage, and fuel level. The layout changes between Sport and Rain modes. The percentage readout below the fuel-gauge is a nice touch but it is not as accurate as your phone’s battery indicator, so be forewarned. The TFT display is a pain to read under direct sunlight even at its brightest setting. The switchgear quality, although decent, certainly does not live up to the motorcycle’s price tag.

Unlike the aggression it portrays visually, the 300NK’s saddle is a nice place to be. The rider triangle is relaxed and allows the rider to sit fairly upright without having to put too much weight on the wrists. Fortunately, the clutch action is light and makes the 300NK quite manageable in stop-and-go traffic. As for annoying vibrations, CF Moto have done a commendable job of keeping them at bay in the mid-range of the rev-band. The first bothersome vibrations manifest through the foot-pegs and at the spot where the fuel-tank meets the plastic panels but only when one is close to the red-line. 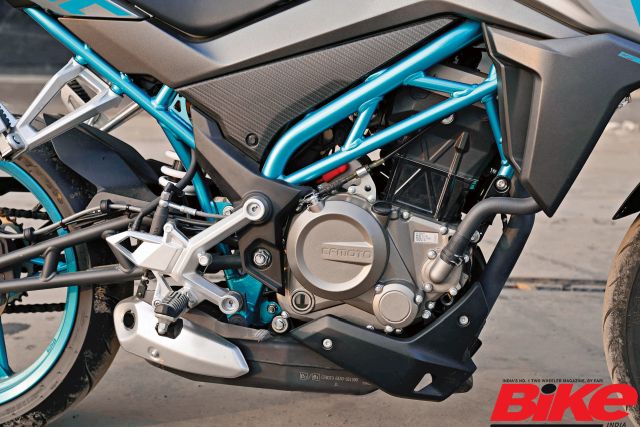 The sweetest part of this motorcycle is its engine. The 292.4-cc, four-valve, liquid-cooled, single-cylinder unit produces 28 hp at 8,800 rpm and a peak torque of 25 Nm at 7,200 rpm. On paper, those are not impressive figures when compared to its competition, but, on the road, it does make the 300NK a fun, refined little machine. The motorcycle pulls away smoothly without fuss, revs its way into a strong mid-range and continues to haul itself swiftly until the red-line. Its short gearing and low-end grunt allow this motorcycle to pull itself cleanly from 45 km/h at 3,000 rpm in top gear (sixth). During our performance run we achieved 0-60 km/h in 3.19 seconds and dismissed quarter-mile in 16.48 seconds. 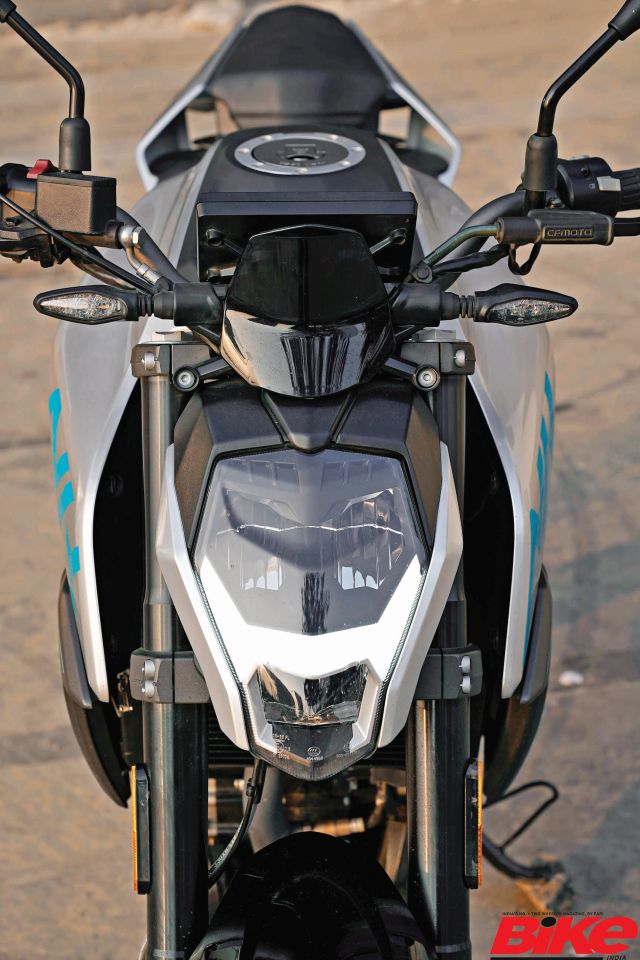 Suspension at the front is handled by a USD fork while a monoshock unit does duty at the rear. The rear wheel lays down power through a 140/60 R17 tyre while a 110/70 R17 provides grip at the front. The wide handlebar and sharp steering geometry offer enough leverage to flick the 300NK into a corner and the chassis complies by keeping the motorcycle planted along its selected line with enough firepower from the engine to make a quick exit. The stiffly set up suspension is the 300NK’s Achilles heel. Although it aids high-speed cornering, it is just not pliant enough to ensure a comfortable ride over poor roads.

The braking department is managed by J.Juan calipers at both ends. They bite into single discs with the safety of dual-channel ABS. While the bite and feedback are good for city use with the occasional ride to the twisties, the lever travel needs getting used to because it almost nudges the handlebar under maximum braking. We were able to drop anchor from 80 km/h to standstill within 31.89 metres in 3.53 seconds. 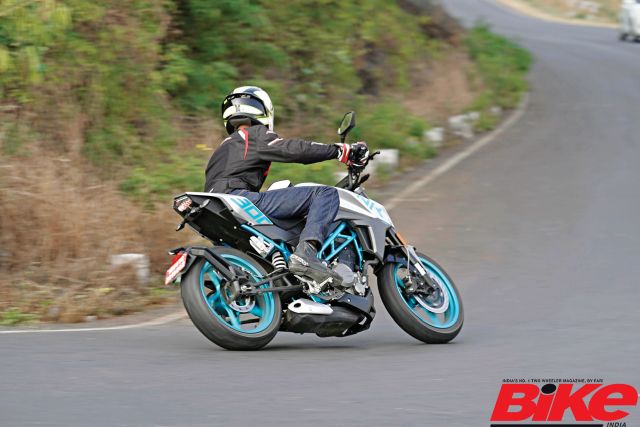 At the end of the road test, we have found the CF Moto 300NK to be an enjoyable motorcycle that is built well and delivers decent performance too. However, the motorcycle is let down by its poor ride quality (over bad roads) and ambitious pricing. When taking the fight to rivals like the Honda CB300R and the KTM 250 Duke — even though the 300NK’s numbers are not impressive — an aggressive price might have given it a fighting chance. Today, priced at Rs 2.29 lakh (ex-showroom), CF Moto have to first fight an uphill battle against the general mindset of “Chinese products won’t last long” and then convince a buyer to part with that much money for the 300NK.