Power comes from Bajaj’s tried and tested 199.5-cc liquid-cooled single-cylinder SOHC engine. Peak output is rated at 23.5 PS at 9,500 RPM and 18.3 Nm at 8,000 RPM, all of which are transmitted via a smooth-shifting six-speed gearbox with well-sorted ratios. True to the claims of Bajaj, the engine does feel a bit more refined than it did on the NS 200 but there’s still some ground to be covered on the refinement front when one compares this machine to similar or even larger capacity motorcycles from Japanese manufacturers. 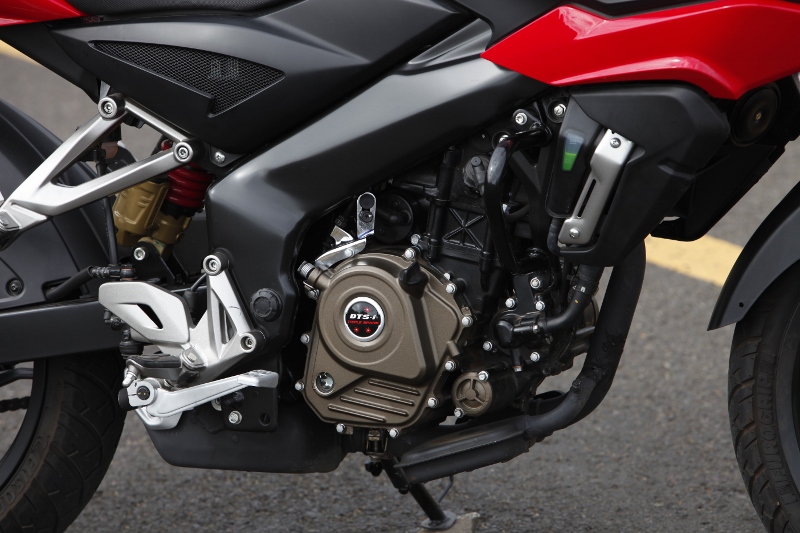 Delivery of power happens in a linear fashion and there is adequate grunt through the entire rev range that allows the rider to tide over most Indian riding conditions. It’s also a quick accelerating bike with the 0-60 km/h run coming up in 3.83 seconds, just 0.1 second slower than the KTM 200 Duke. Reaching 100 km/h from a standing start takes 10.51 seconds while a quarter-mile run is dispatched in 17.75 seconds with the bike reaching a terminal velocity of 114.38 km/h. The engine is also quite efficient, returning an overall fuel economy of nearly 45 km per litre, which endows the motorcycle with a real world range of over 500 km, courtesy the bike’s 12-litre petrol-tank.