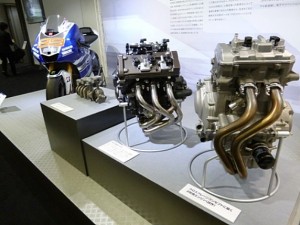 A completely new range of engines displayed by the company in Tokyo
Last month we got you news about Yamaha’s ‘Dark Side’ with details on their all-new 800cc naked MT-09. It was interesting to see the tight-lipped Japanese firm’s mysterious side, as the teaser of the new bike took everyone by surprise. And now they have done it again.

Recently we stumbled upon another mysterious move by Yamaha, thanks to popular Japanese website Autoby, which published pictures of their completely new range of engines displayed during the company’s business seminar in Tokyo. Apparently, the auto major had been secretly working on these, which would be sported on their future range of bikes.

The first engine is a three cylinder unit probably meant for the aforementioned MT-09, as the company had officially revealed details about its new 847cc mill making 116.5 PS peak power and 85.41 Nm of maximum torque. The other engine on display was a smaller parallel twin, which could be a 500cc unit. The actual engine output and other details are not known yet, but its compact dimensions would make the twin very flexible and would conveniently fit a wide range of model from road bikes to dual-sport.

Now we can’t wait to see what other surprises Yamaha has in store for us?