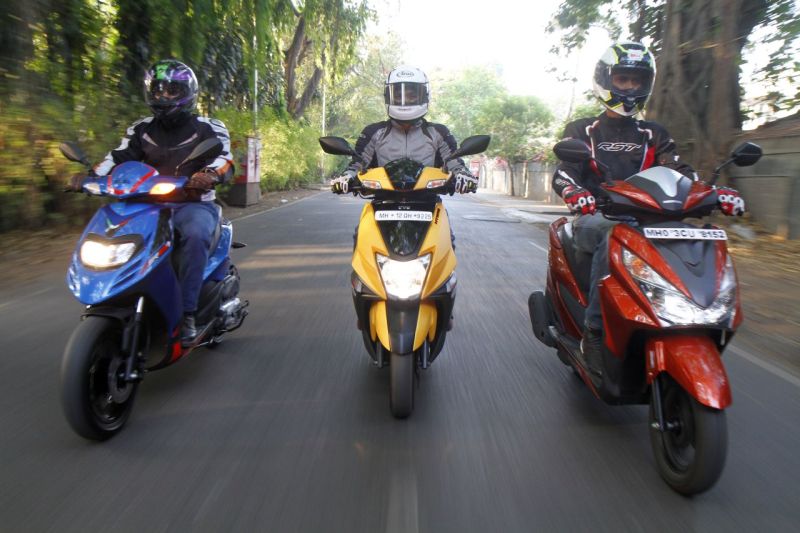 The 125-cc scooter segment is growing so rapidly and giving stiff competition to the Honda Grazia now is TVS’ first ever 125-cc scooter, the Ntorq 125, and the younger sibling of the Aprilia SR150, SR 125. So, here we are testing the three back to back to get you a definitive winner.

Park the scooters next to one another and the Ntorq stands out with its trendy new design. It sure has the most unique design, it attracts plenty of eyeballs on the road. It offers the brightest body colour options, uses interesting textures such as faux carbon-fibre around the switches and foot-pegs, has red stitching on the seat, and has the most appealing rear design. There are just too many parts of different textures and colours on the panels, which may not appeal to all. Overall, TVS have come up with a splendid design that should prove a big draw for the younger target audience. 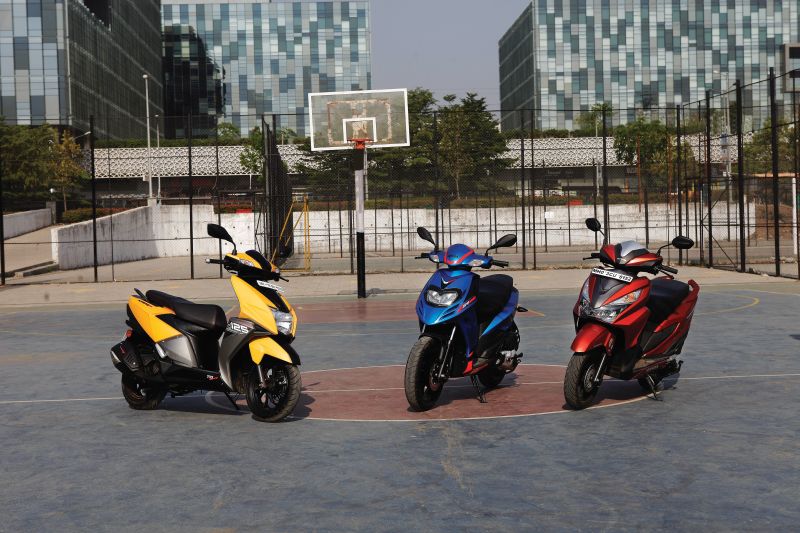 The runner-up vote goes to the Aprilia SR 125 for its no-nonsense sporty design — essentially the same as the SR150. However, a bunch of different colour schemes do make the two siblings stand apart and we really dig this new blue shade. Being slim and tall, and on account of its large wheels, this scooter has a more motorcycle-like stance. The seat is longer than its 150-cc sibling to improve its practicality, but has the least space on the footboard among the three. Better quality plastic and material would have been appreciated by those seeking a trendy 125 scooter. Though it’s a scooter well put together, it is not very plush.
Coming to the Grazia, in pure Honda fashion this scooter maintains the middle path, without being overly sporty or bland. You can go on and say that it’s the least spunky, but you cannot ignore the fact that it is attractive. The scooter isn’t understated compared to other Honda designs, but in the company of its competitors it looks subdued. Maybe, that’s what works in favour of this scooter, or so the sales charts suggest. In a matter of months, Honda have sold over a lakh units of the Grazia. Its sharp lines, well-defined creases and good proportions have been well accepted in India. The smart selection of materials and textures along with good fit-and-finish pushes up the premium quotient. 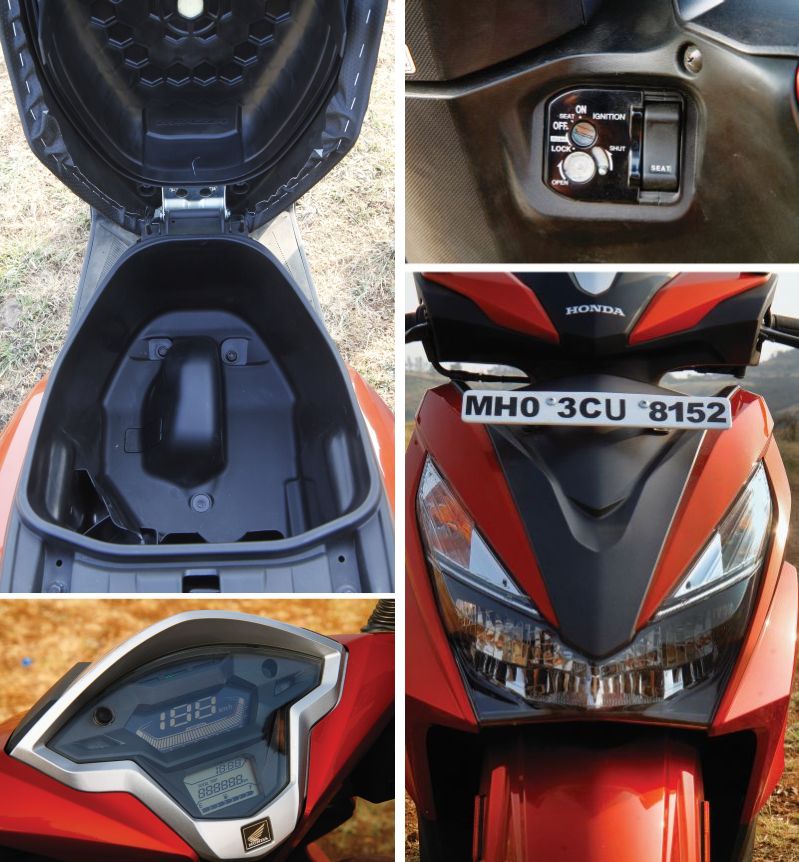 The Grazia is also the first scooter to come equipped with an LED headlight which is the best in this shootout. It also gets a completely digital instrument cluster, featuring an Eco Speed indicators and even a tachometer. The layout is simple and the digits are easy to read on the go, though the tachometer is of little use in an automatic scooter. There’s a nifty lever next to the ignition key to pop open the seat to access the 18-litre cavity. It can accommodate an open-face helmet and has the option of installing a USB charger for an additional Rs 500. There’s also a tiny cubbyhole with a lid on the inner panel. 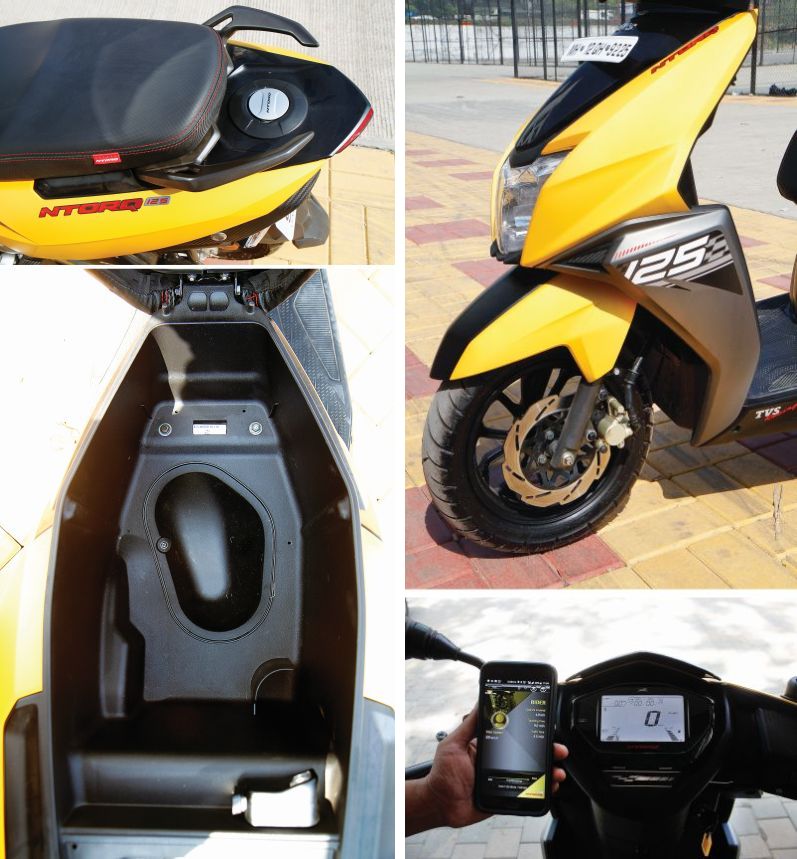 Even though the Grazia has decent features, the Ntorq is filled to the brim. TVS have realized that the new-age buyers who will pick a 125 will not only seek more style and performance, but will also need better features. That’s why they have installed an advanced digital instrument cluster which can be paired with smartphones (SmartXonnect) and you can toggle through the menu using two dedicated buttons situated at the bottom of the display. Once your phone is synced, it can assist during navigation by guiding you through the route and it even throws information about incoming calls. It also gets a lap-timer, though I am not sure how useful it will be on the streets. Bits like an engine kill switch and an integrated pass switch are great value-additions that come in handy during the usual city runabouts. It also has the largest under-seat storage space of 22 litres which comes with a light and a USB charger. Of course, like the other two, the Ntorq also gets telescopic fork and a front disc brake, but the TVS comes with a stylish, wavy disc. TVS has gone all out and included all the bells and whistles you might ever need, even though some of them might seem gimmicky. If there’s something they should have included, it would be a bright LED headlight. 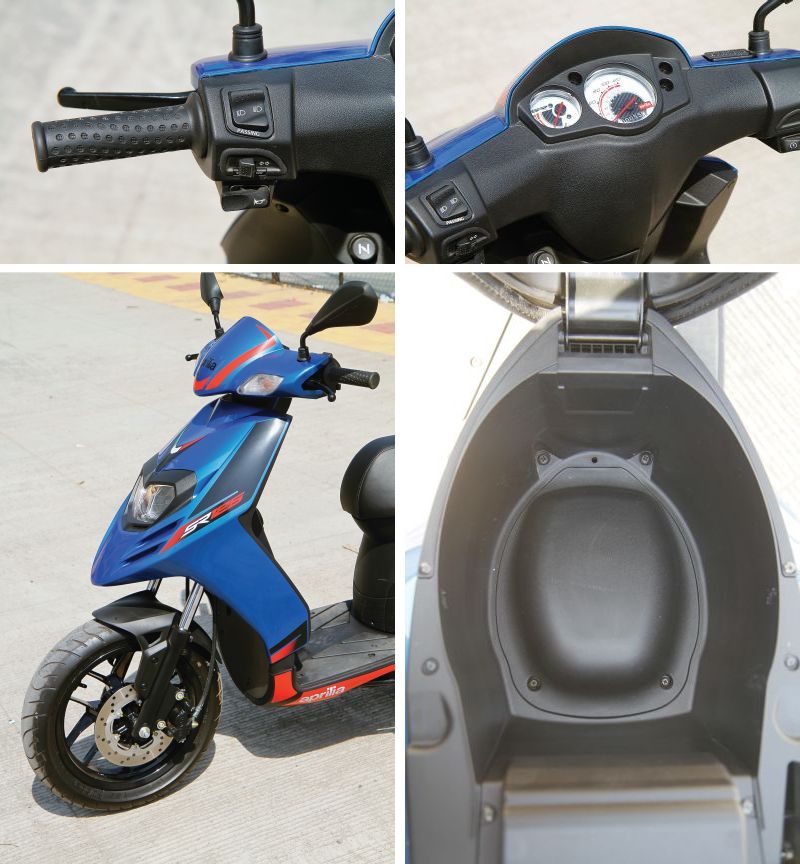 In terms of equipment, the SR 125 looks like a decade-old model, especially in the company of the Ntorq and Grazia. It’s all-analogue instrument cluster not just looks archaic, but is the least accurate. It shows 60 km/h on the dial when it is actually doing 51.5 km/h and the true-speed difference widens as the speed increases. There are no LED lights, no pass switch nor even a brake lock. However, it does get the best ground clearance and has the most generous fuel tank capacity of 6.5 litres as compared to the Grazia’s 5.3 litres and Ntorq’s 5.0 litres. With the newer models, the 125-cc scooter segment has evolved, and so have the buyers. If the Aprilia doesn’t take a call for action soon, it will become very difficult for the SR 125 to survive this tide of change.