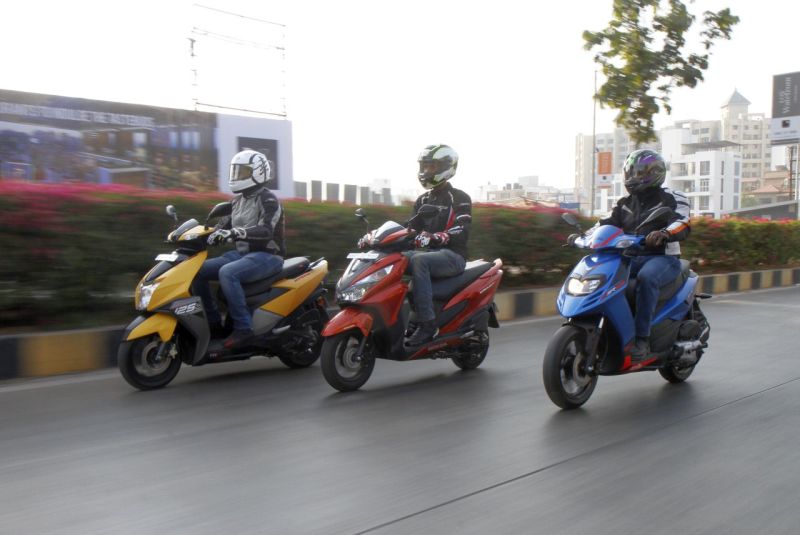 Having covered style and features, let’s delve into the performance aspects of these scooters. Here the SR has the strongest rub-off effect, thanks to its spirited elder sibling, SR150, and overall styling. Even when parked, it looks energetic and ready for action. The 124.7-cc three-valve engine makes a decent 9.52 PS but sounds coarser than its rivals. This along with a sporty exhaust note gives the Aprilia a peppy character. The scooter also makes a respectable 9.9 Nm of torque, which is less than the others and peaks 1,000 rpm later. It feels quick but the power plateaus in the middle, making it the slowest in this lot to reach from zero to 60 km/h (achieved in 7.95 seconds). This isn’t a surprise since it is the heaviest here at 120 kg, compared to the Ntorq’s 116 kg and the Grazia’s 107 kg. What does impress one, though, is its stronger top-end power delivery which helps it to get the best-in-class top speed of 99.24 km/h (with the misleading analogue speedometer pointing north of 120 km/h). 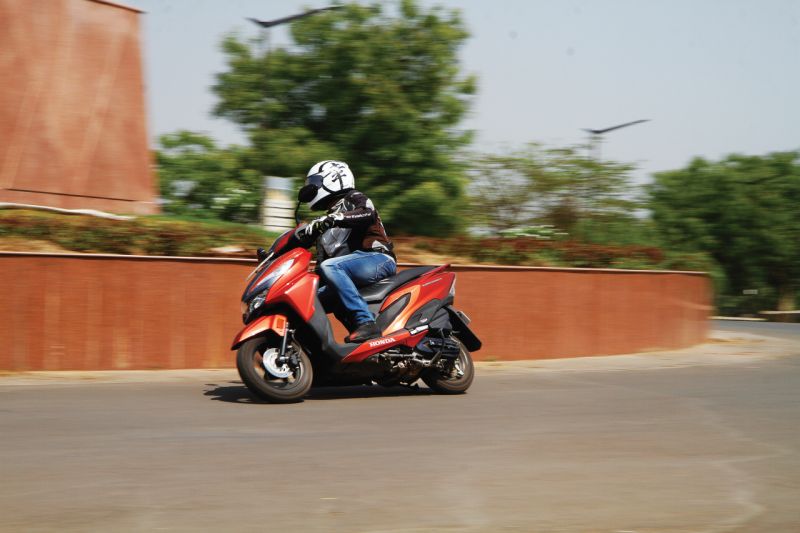 In comparison, the Grazia stands at the other end of the spectrum. This Honda is the most refined here and offers extremely linear power delivery. Its 124.9-cc single makes a modest 8.63 PS and class-leading torque output of 10.54 Nm, which comes early at just 5,000 rpm. At traffic signals, the Grazia left the other two behind every single time; it being the fastest off the mark and the quickest till 30 km/h. Like most Hondas, a smooth engine, relaxed power delivery and light weight are its biggest virtues. This makes the Grazia an excellent scooter in the urban environment. The 0-60 km/h figure isn’t too bad either as it accomplishes the task in 7.15 seconds. Past this it gradually starts to lose steam andmaxes out at 90.11 km/h. Since it has the most accurate speedometer, what you see is close to what you get. 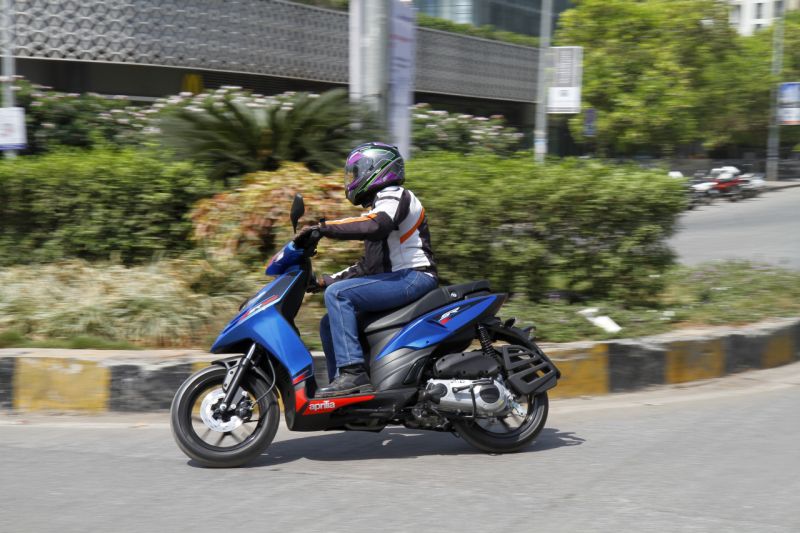 This brings us to the fastest scooter here: the TVS Ntorq. It comes with a new 124.8-cc three-valve motor good for 9.4 PS and 10.5 Nm of torque produced at 5,500 rpm. This is the peppiest package here. Although it lags behind the Grazia initially, it soon zips to 60 km/h in 6.93 seconds flat. There’s barely any vibrations or harshness and the scooter has a nice motorcycle-like exhaust note. The engine also has a certain eagerness and ample power to offer whenever demanded. These traits make the Ntorq a lot of fun to ride around. Having the best mid-range further improves the rideability. This TVS is also the fastest to cross the quarter mile mark to reach its top speed of 98.71 km/h and yet remains surprisingly composed. 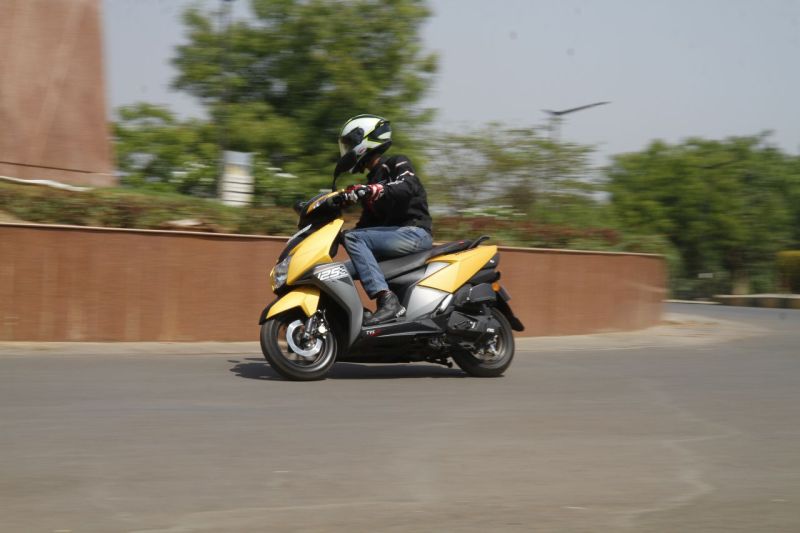 Having tested the scooters in a straight line, we move on to compare their manoeuvrability and ride quality. Being highly impressed by the dynamics of the bigger SR150, we start with its sibling. The SR 125 has the largest (14-inch) wheels while the TVS gets 12-inch ones at both ends, and the Honda comes with a 12-inch wheel at the front and a 10-inch one at the rear. This, along with a firmly set up suspension and a sporty riding position, make the SR not just the sharpest handling scooter in this segment, but probably in the entire scooter market. In spite of being a tall scooter, the weight distribution is spot on and gives it the natural ability to seamlessly cut through traffic. The brakes are equally spectacular and bring the scooter to a halt in the shortest distance and time. The trade-off here is that even though the suspension set-up is ideal for sporty handling, it is far too firm for comfort. Even minute road undulations translate into jolts for the rider and pillion, making it clearly uncomfortable for commuting. 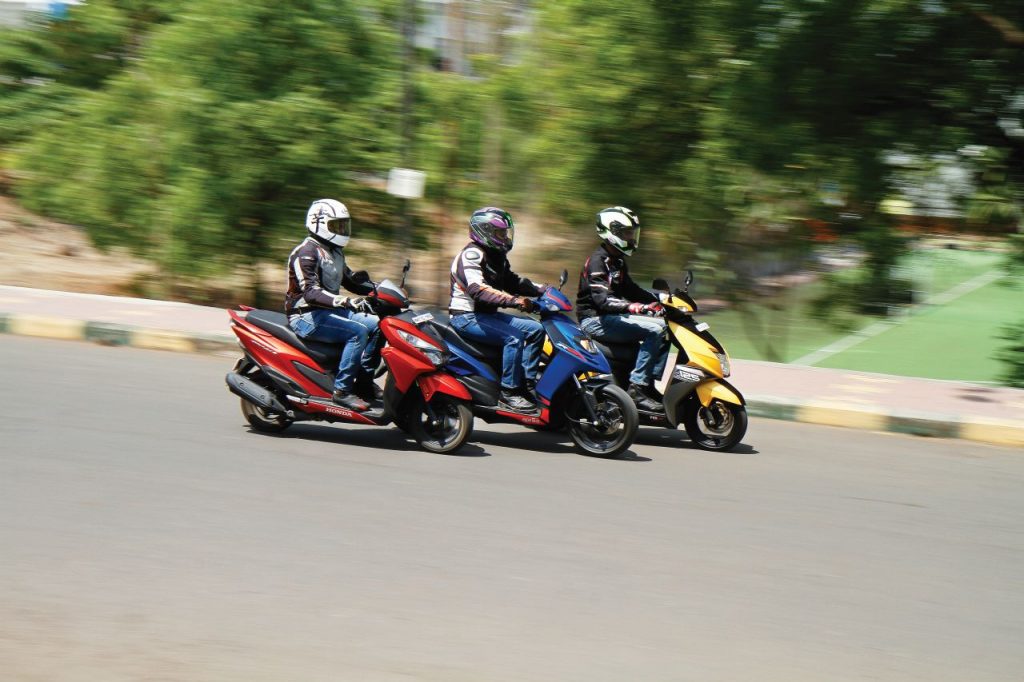 Those who dread the SR 125’s ride will love what the Honda has to offer. Its suspension is softly sprung and soaks in most of the ditches and potholes without much drama. This also means that although it is easy to flick around, it’s not as sharp as the others and doesn’t win the sporty title in this round. The CBS (Combined Braking System) is a welcome offering and ensures that the scooter remains planted even under hard braking. It’s a practical set-up that does a good job of keeping the rider and pillion comfortable in most situations.
TVS seem to have broken the code of manufacturing a scooter which offers sporty handling along with a pliant ride quality. There’s a certain plushness in the ride, one that can be compared to some premium motorcycles, where it rides through road undulations with such control. Where the ride is so forgiving, it also manages to be nimble and fun (still not as sharp as the SR). The Ntorq is quick to respond to steering inputs and impressively holds the line during cornering. The brakes also have a confident feel and offer a great bite which is only second to that of the Aprilia. This truly is a surprise package from TVS. 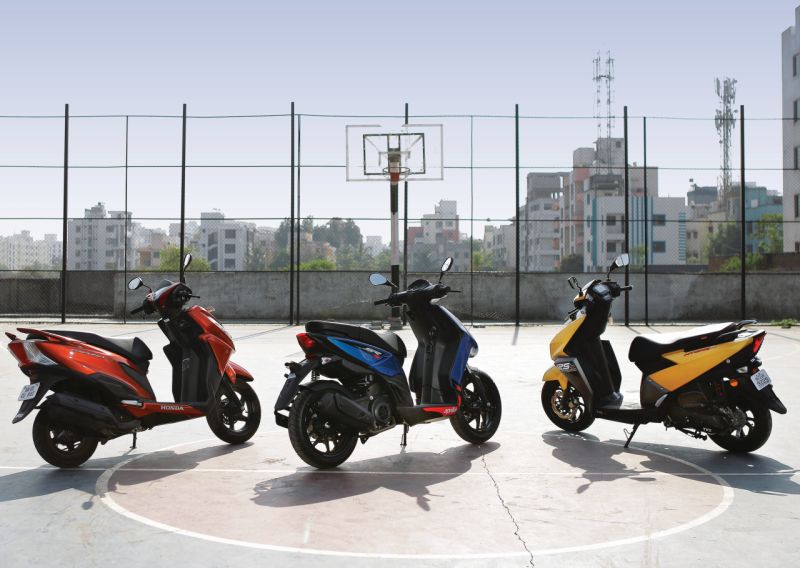 Finally, it all boils down to the price. The SR 125 has the highest ex-showroom, Delhi, price tag of Rs 65,309, the Grazia is about Rs 3,000 cheaper, while the Ntorq carries the most attractive price tag of Rs 58,750. What should you buy then? It’s clear that the SR 125 is the sportiest scooter here and is aimed purely at the racer boys. The Grazia is for the slightly more mature buyer who’s looking for a little more powerful and stylish offering for city runabouts. But it’s the Ntorq that strikes the right balance between being engagingly quick and agile and yet being stress-free and efficient, making it an enjoyable ride no matter what the situation.