The last few years haven’t gone down well for the world’s most beloved MotoGP champion, but The Doctor believes that he can challenge for a spot on the podium in the first race at Qatar this coming weekend.

Rossi has shown good progress in winter testing, prompting speculation that he may well be back in the title race this season after two forgettable years with Ducati. His promising progress back on the factory Yamaha culminated in him topping the leaderboard on day two of the final rain-sodden test at Jerez.

Speaking at a recent press conference, Rossi stated, “I’m very happy with the work done in Jerez and over the winter. I was fast and everything worked fine and we have a competitive bike to fight for the podium. I believe that in Qatar will not be so easy; it is a track that is a little difficult for me, but I think I can defend myself and get a good result. I would like to get on the podium: that’s my goal.”

The 7-time world champion’s most recent win in MotoGP was in 2010 – when he was last racing for the factory Yamaha team. New team mate Jorge Lorenzo is the reigning world champion, and has had the better of Rossi over the last couple of seasons as the Italian struggled to come to grips with a flawed Desmosedici. 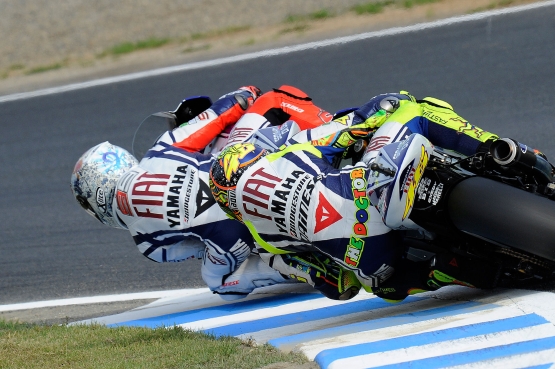