Royal Enfield invited us to Whiteout from the 20 February to 1 of March to explore the mountains of Spiti Valley, Himachal Pradesh, astride a Himalayan What could be more exhilarating than a 10-day trip to the snow-clad mountains of Spiti Valley in Himachal Pradesh? The answer to that is exploring the mountains with a motorcycle alongside you. To experience the real beauty of these mountains they have to be visited at a time and season when not many dare to venture into those places. With varying terrain, temperature and high altitudes coupled with thrills at every moment, this ride was an experience that will be plastered in my memory forever.

Whiteout 2020 is a ride, the third of its kind, organized by Royal Enfield and this year it had a limited number of participants: 11. With two riders from the media and two official Royal Enfield lead riders, there were a total of 15 motorcycles that would undertake this trip. Considering the fact that I had never seen snow or been to a location that touched sub-zero temperatures, this was something I was really looking forward to. As the name “Whiteout” suggests, we would be taking a Himalayan route through a lot of ice and snow with some of the most beautiful sceneries and mountains covered for miles in “white” alongside us on the ride. The planned route for the ride was around 930 km. It would start and culminate in Shimla, after taking us through some of the highest spots in the mountains.

Royal Enfield handed me a brand-new Gravel Grey BS VI-compliant Himalayan that I would be riding for this trip. It was all ready to take on these icy conditions with some slight modifications. The main addition that added safety to us and the motorcycle was the big and strong crash guards along with Barkbusters hand-guards installed in case of a fall. The bike was also fitted with Oxford rain muffs and heated grips that ensured warm hands for a comfortable ride throughout the journey.

Shawn Dsouza and Pankaj Bishnoi were the riders that would be leading us on the ride. Three backup and luggage vehicles that accompanied us were a Bolero Camper, Maruti Suzuki Gypsy, and a Toyota Fortuner. The mechanics, Rahim and Yuvraj, along with the whole Royal Enfield team made sure that both us and our bikes were taken care of.

The ride was flagged off from the capital of Himachal Pradesh, Shimla, situated at an altitude of 2,276 metres above sea level, from where we would be riding down to Rampur. This 130-km ride was expected to be an easy one considering that we would be riding through the narrow roads around the mountains and there would not be many off-road patches. The previous night saw some rain and snowfall, which resulted in Shimla greeting us with our first view of all things covered in white in the morning. This led to us having to tackle black-ice on the road while passing through Theog and Narkhanda. The team was able to make it through most of the tricky and slippery sections astride a Himalayan to make our way out of Shimla and into Rampur successfully.

Rampur is situated considerably lower than Shimla at 1,021 metres above sea level. The weather in this location was pleasant and we were put up in what was a beautiful palatial property converted into a hotel. This was the last day of bearable weather that we were going to experience. We were set to head from Rampur to Nako, 185 km away, making it the longest day ride of our trip. The route to Nako passes through Kalpa, Spello, and Pooh. What made this day exciting and one of the best days of the journey was the varied terrain in the route that consisted of fast roads in the twisties of the mountains coupled with many off-road sections. 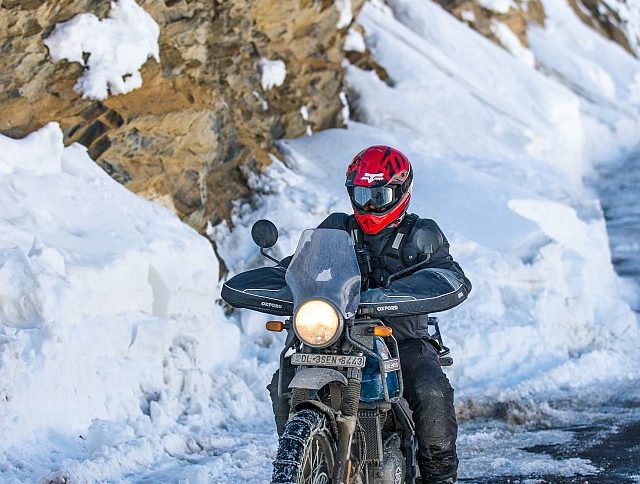 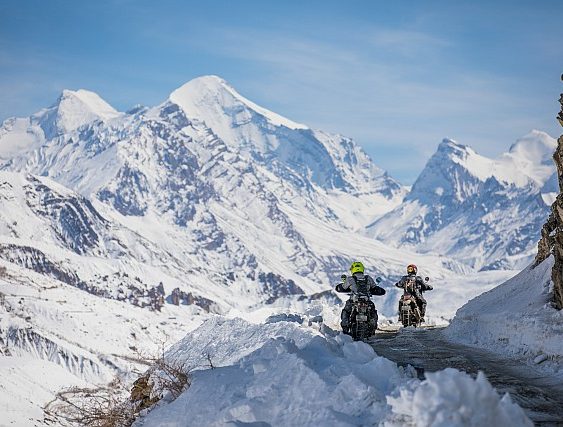 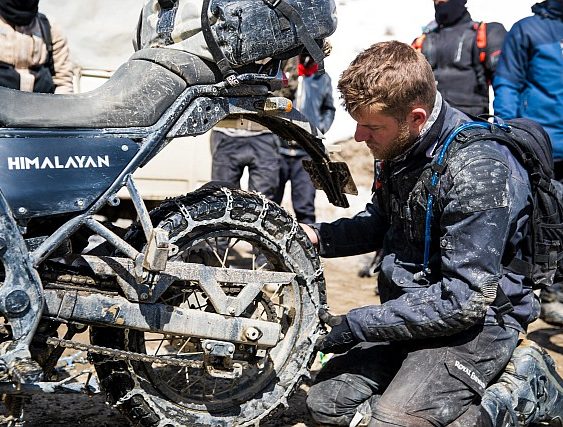 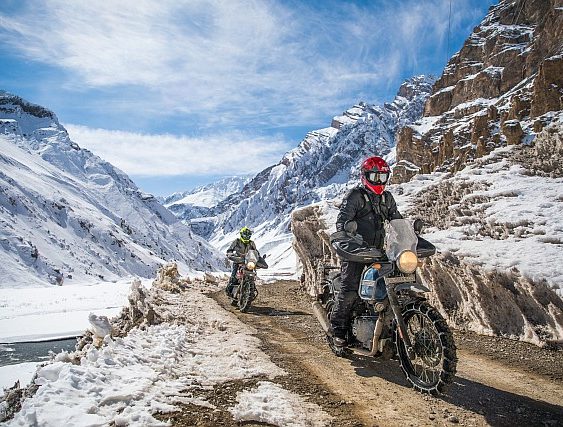 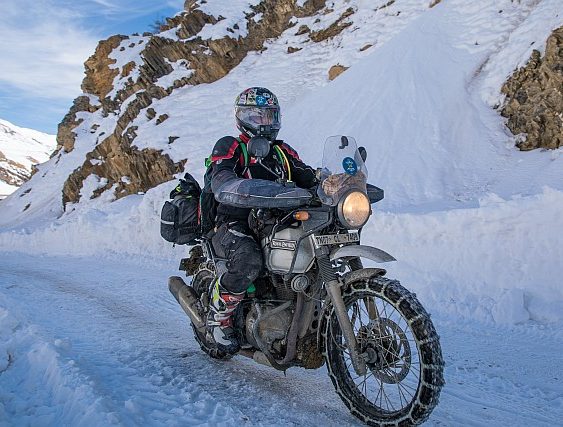 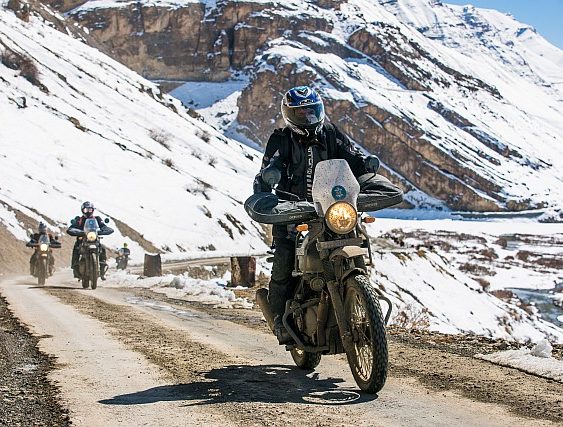 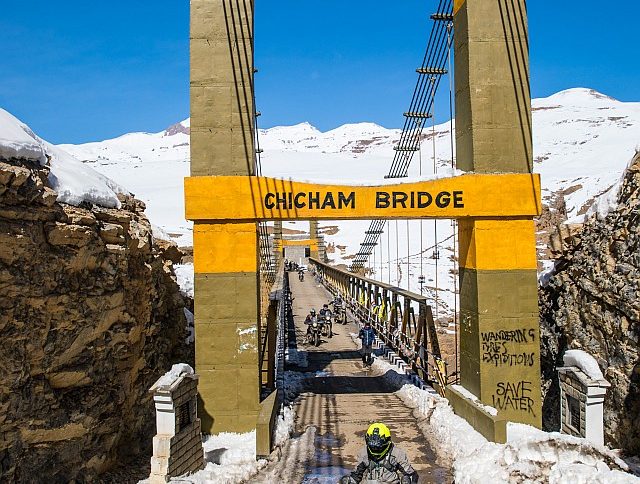 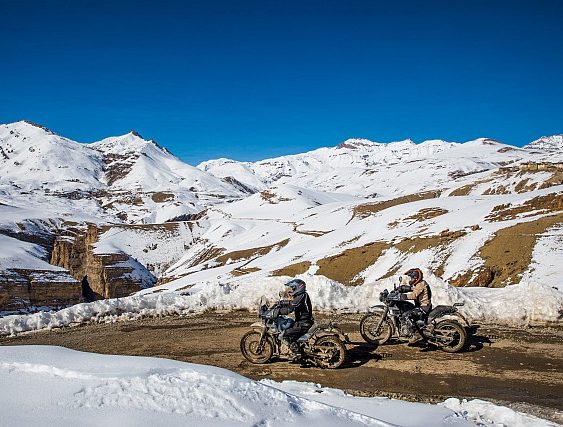 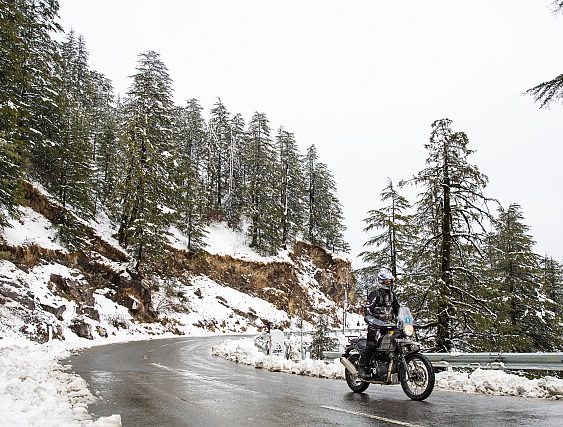 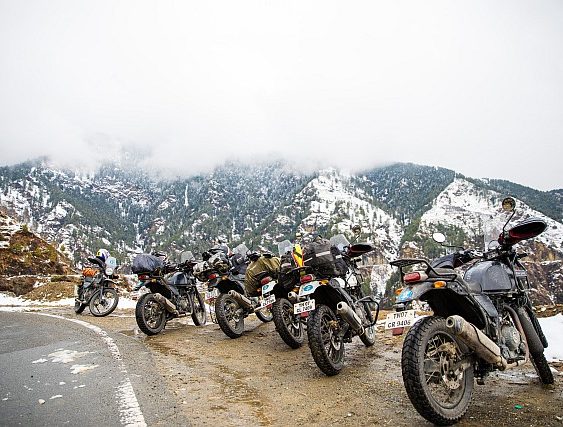 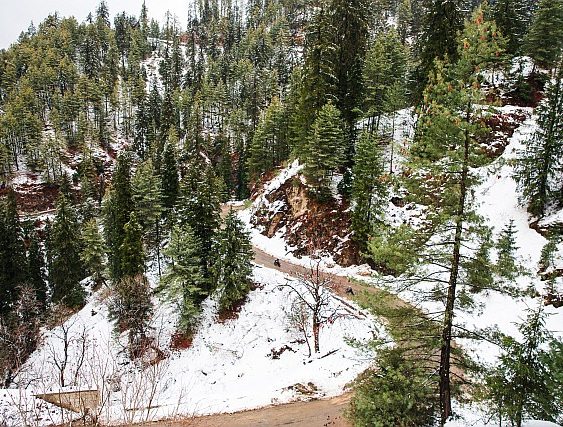 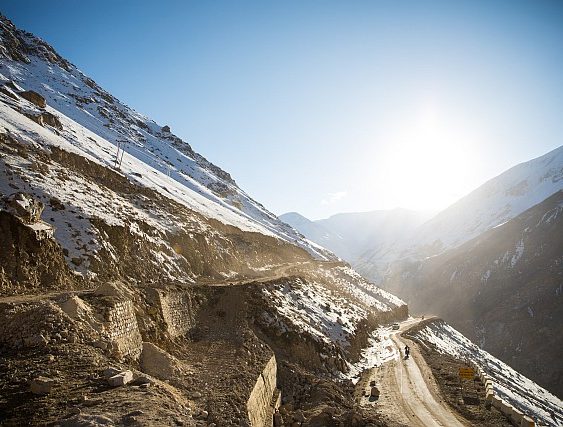 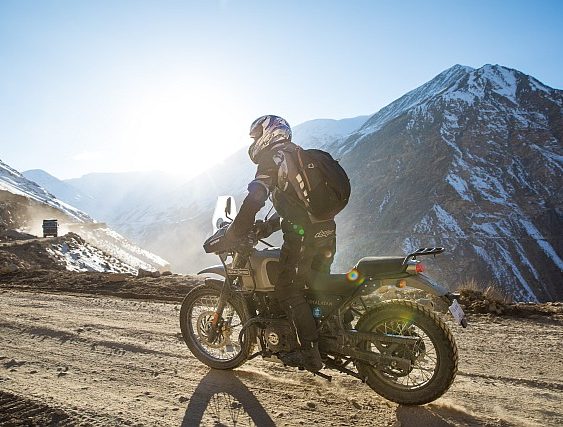 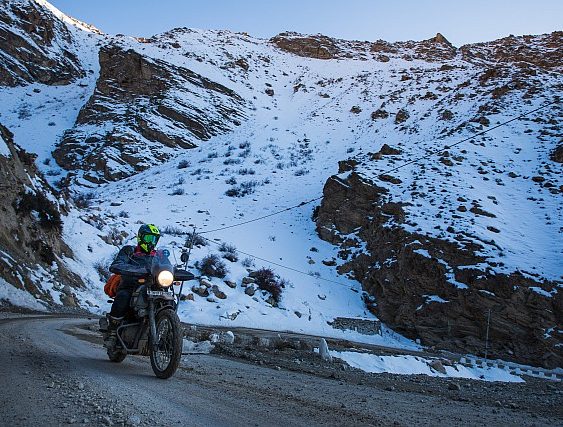 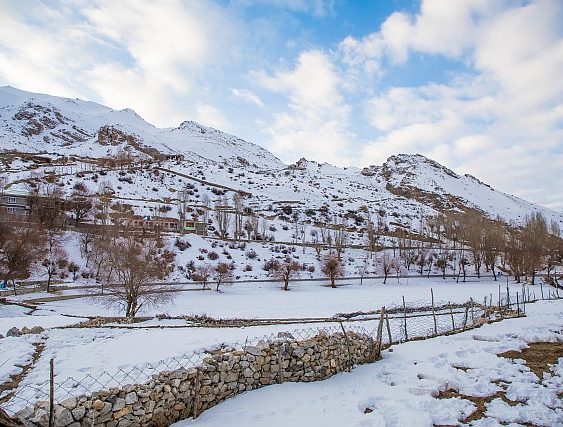 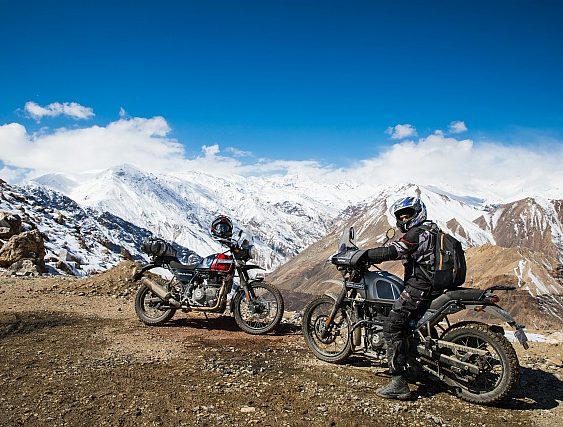 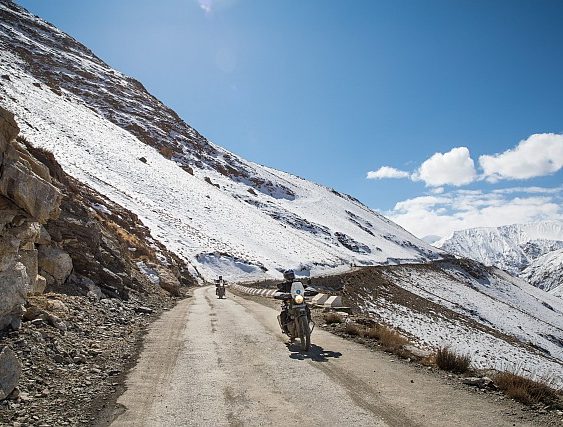 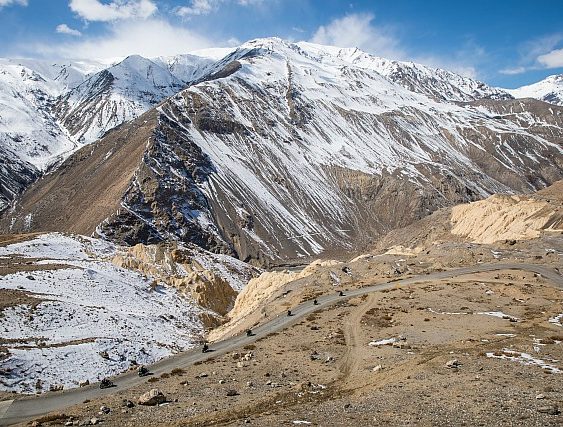 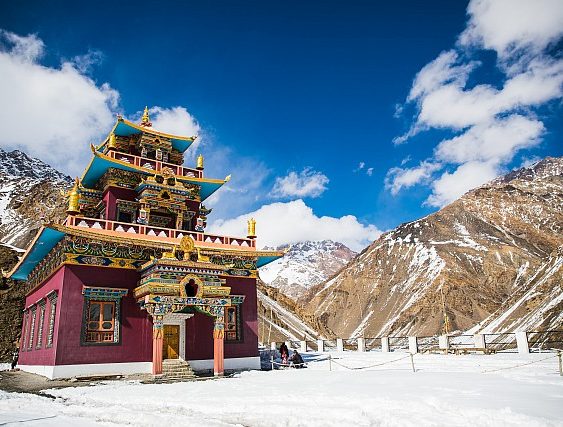 Nako is situated at 3,625 metres above sea level and arriving there from Rampur was a sudden shock to all of us. None of us on the trip was going to forget Nako for a very long time, with crazy temperatures that gave us the real “Whiteout” feel. Having said that, Nako is one of the most beautiful places to visit and we were lucky to be staying right opposite the famous Nako Lake, which was completely covered in snow. The evening and night at Nako were comfortable with the bonfire that was set up for us. The feeling of comfort ended with the fire dying down and, to my misfortune, the freezing temperature at night didn’t allow me to sleep.

The morning dawned with me being sick with AMS (acute mountain sickness), but many thanks to Dr Bhushan who sorted me out with medicines and pumping me up with oxygen which allowed me to carry on my journey.

The ride on the third day was considerably short and comfortable, a distance of 63 km from Nako to Tabo, with a stopover at the Gue monastery that carries the mummy of Sangha Tenzin, believed to be over 500 years old. Tabo welcomed us with warm and comfortable home stays that gave us a good evening to rest and warm up for the fun planned for us the next day. The reason for the short ride this day and stopping at Tabo was so that we could ride to Kaza the next day, while making a long stop at Pin Valley.

Probably the most exciting day during Whiteout was the fourth day, riding from Nako to Kaza via the Pin Valley National Park. This is where we finally got to use the snow chains on our tyres and experience how it felt to ride with them on. The road into Pin Valley was completely covered in ice and snow was the perfect place to put the snow chains to the test. Rahim and Yuvraj assisted all of us in attaching the snow chains to the tyres of our Himalayan. They further tightened the chains with metal wires to give us greater grip to wade through these conditions with ease. The snow chains amazed us by the way they slowly dug into the snow to provide grip. There were still times when the front and the rear end suddenly slipped out, but the chains immediately allowed one to have time to put one’s foot down to avoid a fall. This was a great first-time experience and goes to show how important snow chains are in such terrain.

We arrived at Kaza, which is one of the highest points at 3,800 metres above sea level, and this is where we would be spending the next three days before making our way back to Shimla. Everyone looked forward to the rest day at Kaza after days of riding. With the immense beauty of Kaza, I along with a few other participants decided to head out for a short ride on the rest day and explore more of the beauty around. On the rest day, Yuvraj and Rahim performed the first service of all the BS VI-compliant Himalayans at Kaza after the completion of the 500-km run-in.

The next day, all riders were set to head out to Kibber and Chicham bridge. Kibber is a small village in this region which is situated at 4,270 metres, making it the highest point visited during our trip, while Chicham bridge is considered to be Asia’s highest bridge which we got a chance to ride over. The days spent in Kaza were memorable and gave us a chance to take in the white beauty of Kaza. Along the way, we also fuelled our bikes at an Indian Oil pump which is the world’s highest petrol pump and retail outlet. The ride back from Kaza followed the same route over the next three days to arrive back at Shimla. The memories and friendships built over this trip will forever be remembered and my suggestion to all bikers is to try and experience this one-of-a-kind trip to Himachal Pradesh in the winter. The icing on the cake for this trip was using the BS-VI Royal Enfield Himalayan that took me for 930 km of varying terrain without a single problem along the way. This was not the most challenging ride organized by Royal Enfield, but with views like that around you, you wouldn’t mind cruising comfortably and taking in the beauty around you at every passing moment.