Royal Enfield looks set to launch the all-new Bullet 500. The name returns after nearly a decade after the 22 PS cast-iron engined motorcycle made way for the introduction of the 24 PS AVL-engined model, which arrived with the Machismo 500 name. The next 500cc motorcycle launched by the company was the 27.5 PS Classic 500 which featured two spark plugs and electronic fuel injection; followed by its Chrome and Desert Storm guises. Now though, Royal Enfield is about to bring back the charming old 500, albeit with a few changes to bring it up to modern standards.

The new Bullet 500 will make its debut in a new Forest Green colour. This is somewhere between the Sea Green and Battle Green offered by the company on the Classic 500; the latter being unavailable in India. From the teaser images, it is clear that the new Bullet will feature the 499cc unit construction engine but is fed by what is clearly a carburetor. If this is the case, then Royal Enfield will have addressed the concerns of many riders by introducing this low-cost and relatively less demanding motorcycle. We expect output figures to be on par with the EFi models at 27.5 PS of peak power and 41.3 Nm of torque. It remains to be seen if the new Bullet 500 will sport a 19-inch front and 18-inch rear combination, or will simply feature 19-inch wheels front and rear.

Royal Enfield haven’t confirmed a launch date for the new Bullet 500, but we expect it to be in showrooms sooner rather than later. As far as the pricing goes, expect it to be about Rs 20,000 lower than the Classic 500 EFi. 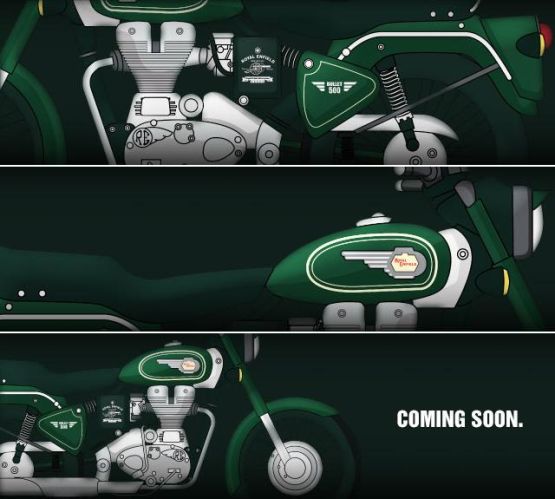