Royal Enfield kicks off 2023 with the launch of their most premium offering, the Super Meteor 650. We were recently invited to Jaisalmer, Rajasthan where we got to properly experience what this cruiser is capable of.

Royal Enfield has been vastly upgrading their portfolio of motorcycles and the Super Meteor 650 has been one of the most awaited launches. It is the third motorcycle to come out of Royal Enfield’s tried-and-tested 650-cc platform. The design is more or less similar to the Meteor 350 where the bike follows the silhouette of a classic cruiser. It is nice to see Royal Enfield tapping into the middleweight cruiser segment as it is something that many enthusiasts have been waiting for. At first glance, the Super Meteor 650 is a well-built motorcycle that has a really premium finish to it.

With this new offering, there are components that we see on a Royal Enfield for the very first time. They include a full-LED headlamp and a Showa Big Piston Separate Function USD front fork. The instrument cluster is the same as the one we see on the Meteor 350 but the Super Meteor gets the off-set tripper navigation pod as part of the standard equipment. The bike is offered in two variants, Standard and Tourer, with a total of seven paint schemes. The standard variant will be available with the option of Astral Black, Astral Blue, Astral Green, Interstellar Grey, and Interstellar Green, while the top-end Tourer variant gets Celestial Red and Celestial Blue paint schemes to choose from. For this first ride review, we received the top-end tourer variant which sports a larger windscreen, a special touring seat, and a backrest for the pillion rider as well. On the other hand, the Standard gets a narrower split seat unit and ditches the pillion backrest as well as the windscreen.

A nice touch is the aluminium cubes on either side of the handlebar that house the switchgear. Apart from that, the bike also makes use of knob adjustable clutch and brake levers, which are components we usually see on more expensive motorcycles. The twin exhaust units are cylindrical and run lower, parallel to the ground. The integration is neater when compared to the 650 twins which have conical exhaust units that jut out towards the rear end.

The ergonomics of this bike keep a rider extremely comfortable in the saddle. The foot-pegs are forward-set and the rake has been adjusted to accommodate a more relaxed rider triangle. The wide and tall handlebar keeps a rider upright and there is also an accessory option to fit an even taller handlebar. With a seat height of 740 mm, I was easily able to access the ground with my short 5.7-foot height. With this short seat height, the ground clearance stands at a low 135 mm. Although, this was not a problem throughout the ride experience because of the well-paved, open highways in Jaisalmer. The bike uses a 15.7-litre tank and the bike tips the scales at 241 kilograms (kerb). 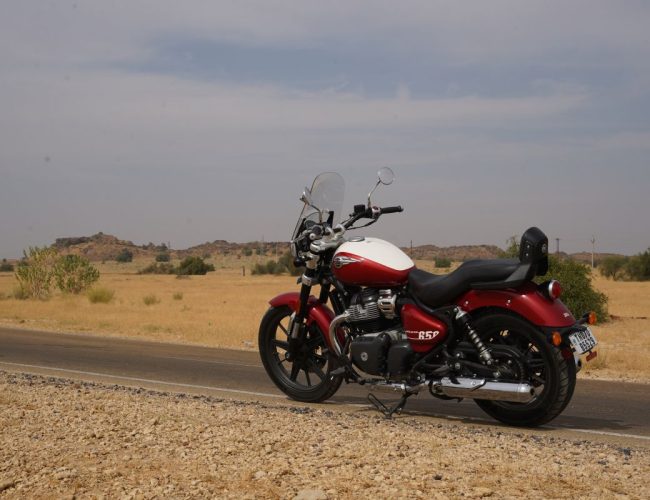 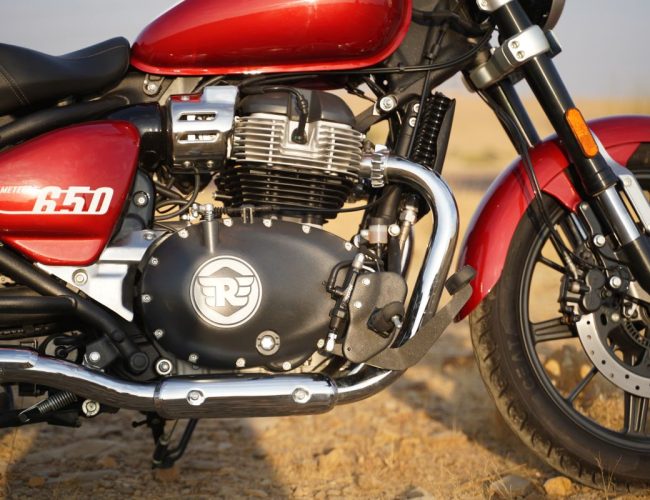 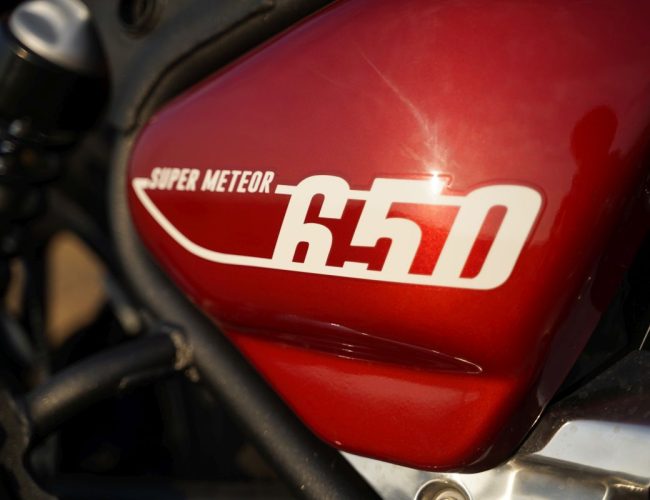 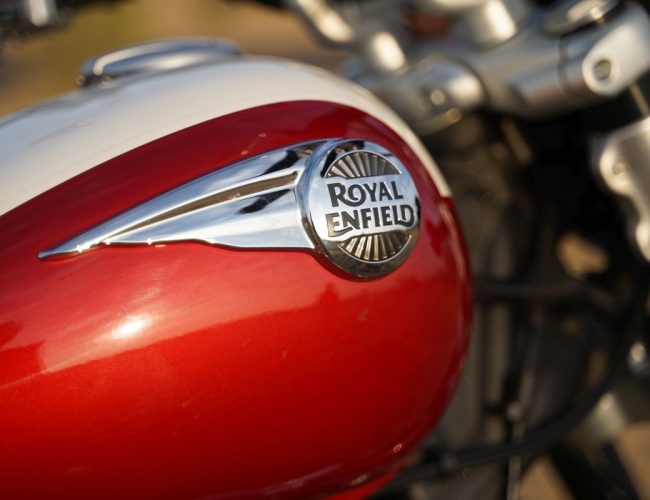 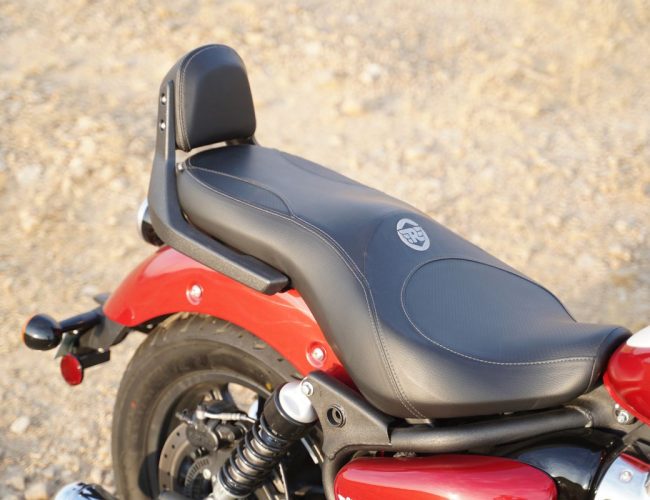 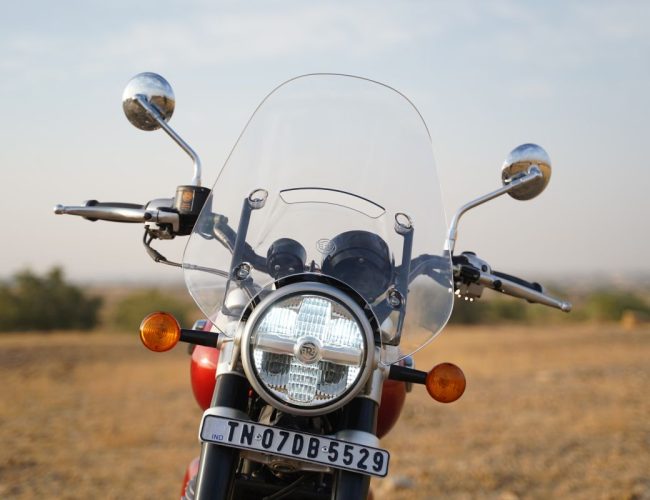 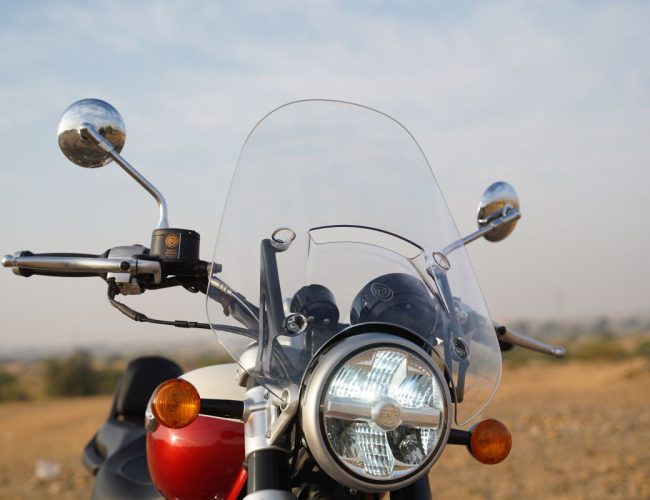 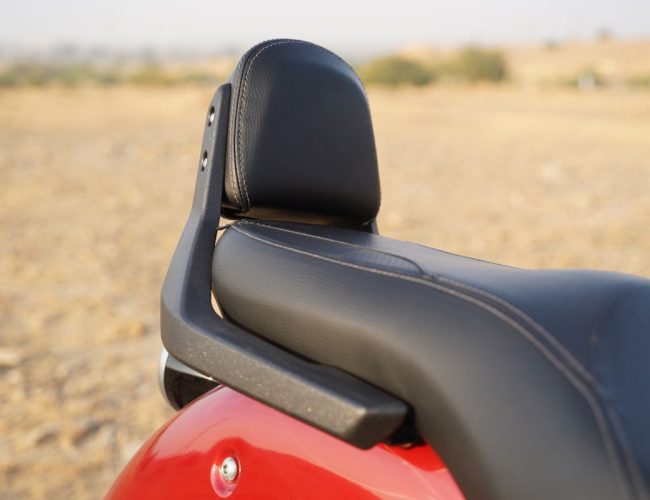 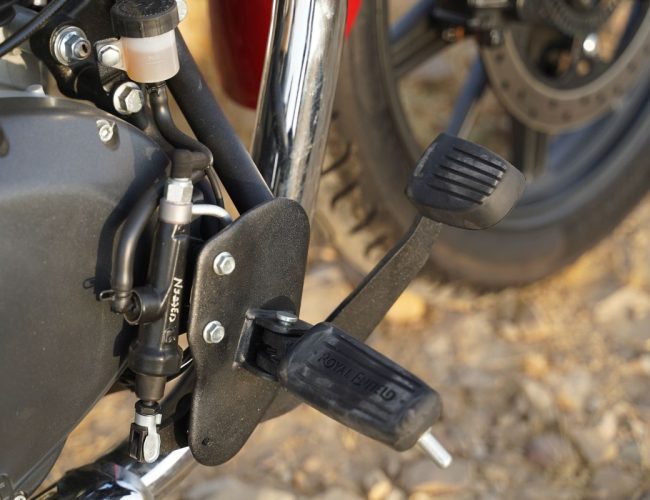 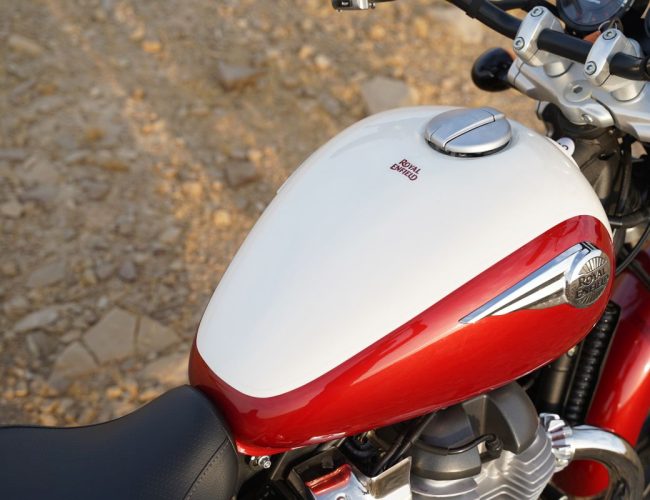 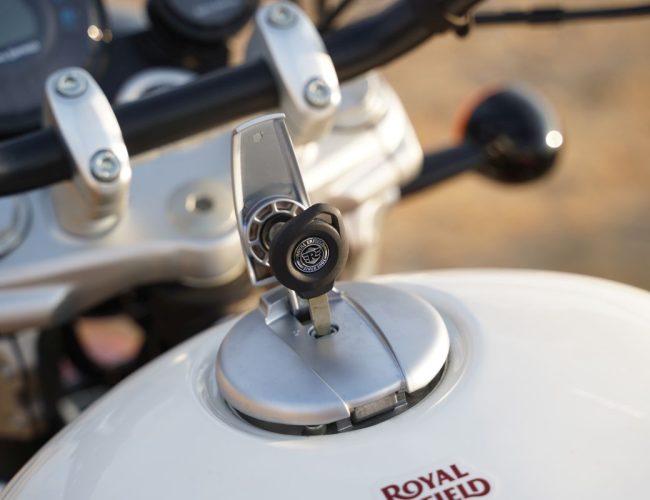 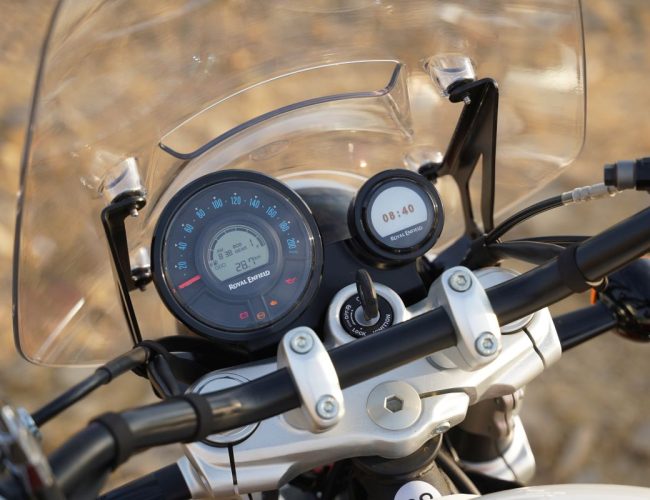 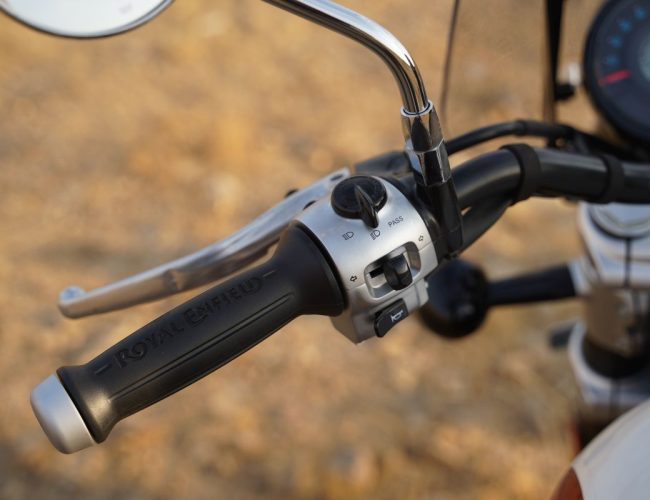 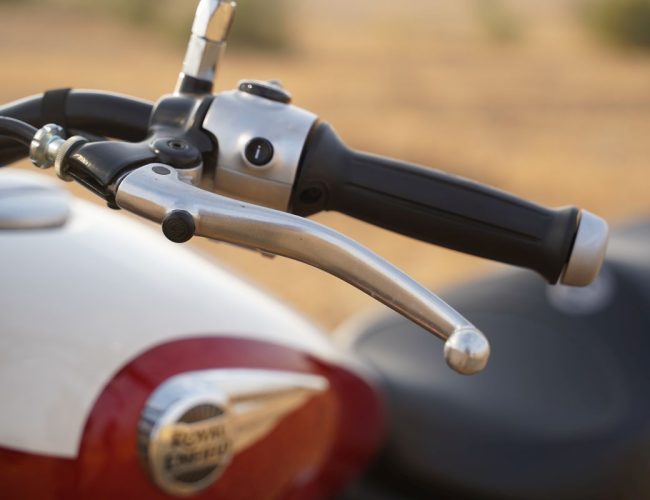 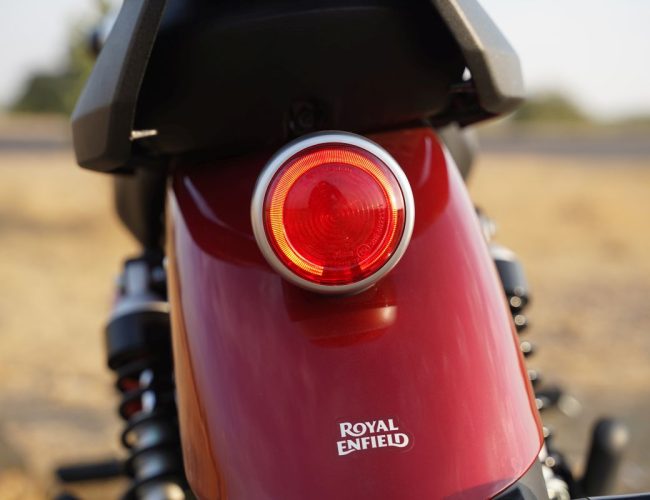 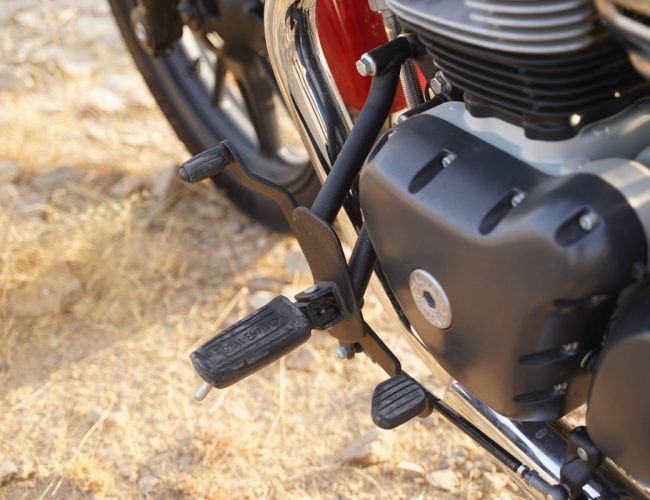 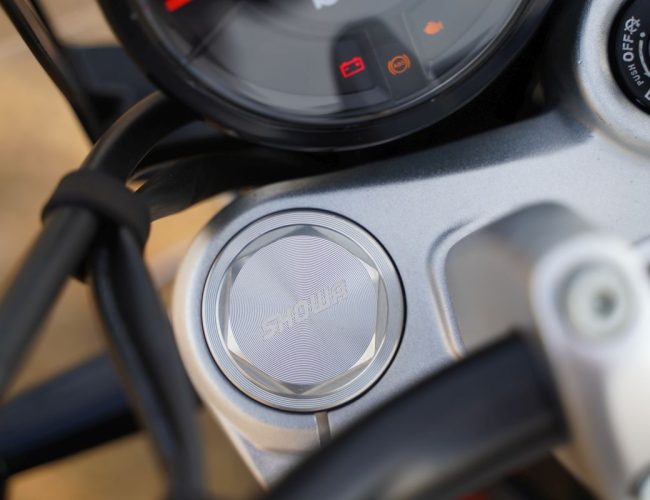 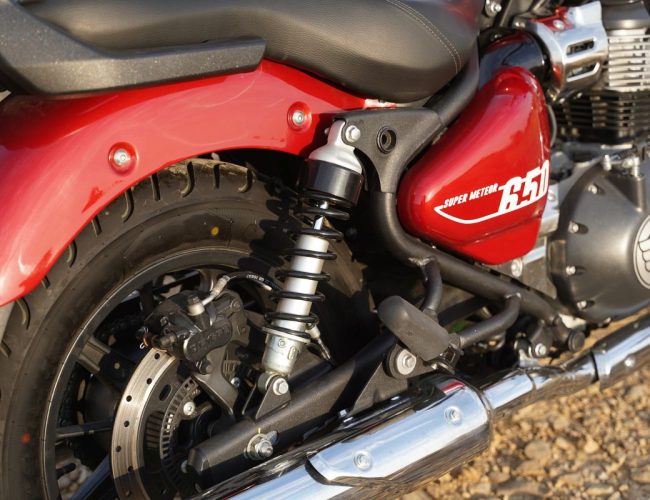 The new chassis and swingarm have been developed in conjunction with Harris Performance. This chassis holds the 648-cc, air-cooled, twin-cylinder motor that puts out 47 hp at 7,250 rpm and a peak torque of 52.3 nm at 5,650 rpm, and is mated to a six-speed gearbox. Royal Enfield says that 80 per cent of the peak torque is available from as low as 2,500 rpm and this is clearly felt as you release the clutch and get going. The power delivery is linear and there is a good amount of torque propelling the bike forward in the low-range rpms. The motor has an extremely tractable nature and can easily handle cruising at speeds of 50 km/h in the sixth gear. It is able to quickly get up to triple-digit speeds and can handle cruising at over 130 km/h with ease. If you push the engine, there are a few vibrations felt higher up in the rev range, although this is a motorcycle that has to be ridden peacefully while taking in the views, so it will not be an issue for the target audience. Even though I am not a cruiser fanatic, I really did enjoy my time astride the Super Meteor 650 as it covers long distances effortlessly while keeping a rider extremely comfortable. Even with the long 1,500 mm wheelbase and the heavy weight, maneuvering the motorcycle at a standstill and taking U-turns was not physically demanding at all. In my opinion, the windscreen could have been slightly taller as the top of my helmet did seem to catch some windblast at higher speeds.

As mentioned at the start of this review, the front uses a Big Piston Separate Function USD fork from Showa at the front, while the rear makes use of twin shocks with 101 mm of travel and five-step preload adjustability. This setup is on the slightly stiffer side to keep in tune with the nature of the bike. While I was a little worried about the low ground clearance, the bike sailed past speed breakers and undulations without any issues. I did find a couple of fast-flowing corners through the route that I had chosen and the Super Meteor 650 impressed me with its stable and planted nature while carrying good speed through the corner. Braking duties are handled by a 320-mm disc at the front and a 300-mm disc at the rear with dual-channel ABS. This setup works well to get the bike to a halt in just about any situation. This bike rides on a 19-inch alloy wheel at the front and a 16-inch alloy wheel at the rear wrapped in CEAT Zoom Cruz rubber. These tyres provide excellent grip as I felt extremely confident even when the bike was fully leaned over.

Like all Royal Enfield models, customers have the option of customizing their Super Meteor 650 with a bunch of accessories. Personally, I couldn’t get my eyes off the Interstellar Grey unit which sported a single-seat unit and bar-end mirrors, giving it a really cool stance. Prices for the Super Meteor 650 start at Rs 3.49 lakh (ex-showroom) for the Standard variant and go up to Rs 3.79 lakh (ex-showroom) for the Tourer variant. This is great pricing for the most premium motorcycle to be launched by Royal Enfield. With the reliability of the 650-cc motor, plush ride quality, comfortable ergonomics, and new premium elements, this bike is surely going to appeal to cruiser enthusiasts.

The Super Meteor 650 ticks all the boxes when it comes to being an extremely capable machine to take on long-distance tours. While the current generation of motorcyclists prefers to take on long rides astride a Sport Tourer or an ADV, there is a classy appeal to cruising on a retro-styled cruiser that none of those motorcycles can provide a rider with. We shall soon test it in the city very soon to bring you updates on how it will fare as a bike for the daily commute. It is great to see Royal Enfield aggressively update its portfolio and we now look forward to the launch of the much-awaited Himalayan 450.