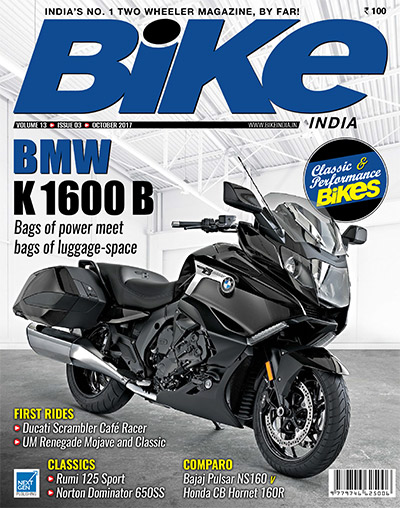 THIS MONTH WE COMPARE THE NEW BAJAJ PULSAR NS160 WITH the Honda CB Hornet 160. These two motorcycles are more or less identical in the amount of power and torque they deliver, but different in their character: while the Pulsar is on the sporty side, the Hornet is a typical Honda all-rounder. You can read the comprehensive comparison in this issue.

The big news in the MotoGP world was Valentino Rossi breaking his leg during training on a dirt track. Many people say that MotoGP riders should not ride off-road bikes during the season and risk getting injured. I don’t think anybody is qualified enough to give advice to a nine-time world champion.

The honourable transport minister says that he wants to push electric two-wheelers. However, since most of the electric power plants are coal-fired, it means that you are only moving the pollution from the cities to where the power is generated. In fact, there was a power shortage in Maharashtra recently and the reason given for this was shortage of coal. Most of the electric scooters in India use Chinese motors and their performance and range are very limited.

There was news that the Eicher Group was bidding for Ducati, but, according to a German news agency, the labour union was not willing to give the go-ahead to the VW Board to sell Ducati. If Eicher were to buy Ducati, I am sure Siddhartha Lal would do a good job of taking Ducati forward. Incidentally, last year I had asked Claudio Domenicali if they were working on a V4 engine for their superbike, to which he had replied in the negative. However, one year down the line they have launched a V4 engine to power the new Panigale.