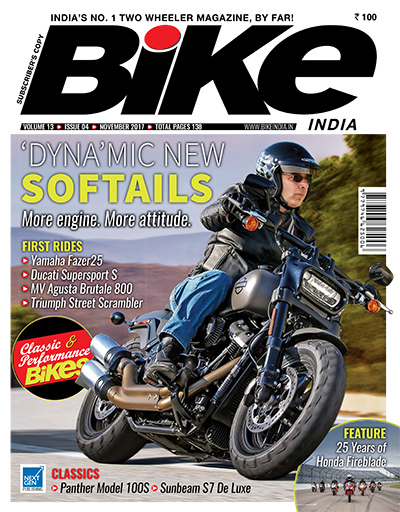 LAST MONTH I WAS INVITED BY HARLEY-DAVIDSON TO Barcelona, Spain, to ride the 2018 Softail range. The new range has been completely revamped from the chassis to the engine. The new chassis is much lighter and stiffer than its predecessor. Similarly, the new engine has been reworked and is now fitted with dual balancer shafts to reduce vibrations, for the new powerplant is no longer rubber-mounted. H-D have done away with rubber mounting to reduce flex and make the frame more rigid.

The roads north of Barcelona in the Catalan mountains selected by Harley were full of twists and turns more suited to sports motorcycles. To my surprise, however, the Softails did not disappoint. In fact, I was in for a pleasant surprise as I swung my leg over the Fat Bob. Even though the foot-rests are much higher, they still ground. The lead rider was setting a brisk pace and the ride was anything but a cruise; in fact, we were flat-out from one corner into another. I could not imagine that you could have so much fun on a Harley.

Normally, one associates Harley-Davidson with ‘driving’ a bike rather than riding it, but the new models have changed all that. Now you can go scratching with a Harley. Even after spending the whole day riding flat-out, there was neither fatigue nor were
my hands tingling with vibrations, and that says a lot about the 2018 range.

After Spain I was in Hinckley in the UK for the launch of the Triumph Bonneville Bobber Black, Bonneville Speedmaster and the opening of the visitors’ centre. A week later I was in Munich to meet the officials of BMW Motorrad and a day later it was Berlin calling for a visit to the BMW Motorrad plant. Incidentally, the pricing of the BMW motorcycles is going to be on the high side because they intend to be a premium brand.