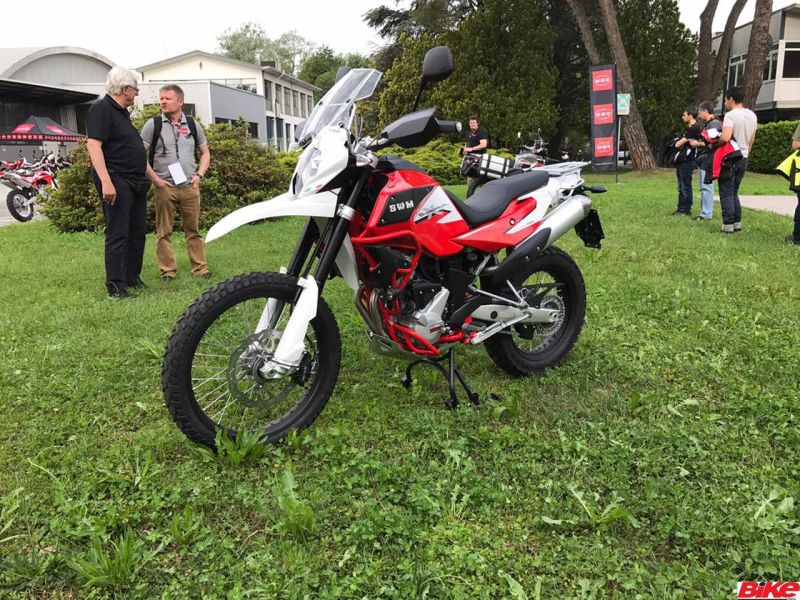 Milan-based motorcycle marque, SWM Motorcycles are manufacturers of off-road motorcycles. Founded in 1971 by Piero Sironi and Fausto Vergani, the name SWM originated as a synthesis of Sironi Vergani Vimercate Milano. The company went into liquidation in 1984 and production ceased until Chinese entity, Shineray Group arrived with funds in 2014.

The Super Dual is powered by a single-cylinder, fuel-injected, 600-cc powerplant that churns out 54.4 PS at 7,500 rpm and a peak torque of 53.5 Nm coming in at 6,500 rpm. The impressive torque is distributed by a six-speed gearbox. Weighing in at 169 kg (without fuel) it appears to be a light motorcycle that is focused towards off-roading. Part of this weight is owed to the high-strength steel round pipes that form the single beam, double-cradle main frame while the sub-frame is made from a lightweight alloy.

Suspension duties are handled by a Fast Ace USD fork with rebound damping adjustment while the rear is taken care of by a Sachs monoshock unit with preload, compression and rebound adjustment. Braking is handled by ABS-equipped Brembo units that bite into a 300-mm single disc in the front and a 220-mm single disc in the rear. It also carries an 18-litre fuel tank to provide an extended range. The Super Dual is expected to be priced around Rs 6 lakh in India. The RS 650 R also shares the same engine and power figures as the Super Dual. It also looks like a much more focused off-roader as compared to the well-rounded Super Dual.

A representative from SWM Motorcycles said, “MotoRoyale is a multi-brand initiative and shall house multiple superbikes under the mother umbrella. Dealers of MotoRoyale shall hence retail various products from the same showroom. MotoRoyale has entered an exclusive arrangement with us for India. After the initial research we intend to start our association with the Super Dual and the motorcycle can be expected to complete its homologation by the end of 2017. We believe that the SWM Motorcycles brand in India shall focus currently on tourers and adventure tourers and offer a unique value for money combination with its Italian heritage and strong price positioning. Hence we shall be focussing the portfolio to the 650 and the future products in this range. While we retain the option for the other products, they are not being considered for India. We remain proud of SWM Motorcycles’ heritage and look forward to this second Italian partner for MotoRoyale.”

MotoRoyale are likely to bring SWM’s motorcycles via the CKD route and assemble them in their Nagar plant. Take a look at our first ride review of the SWM Super Dual 650.