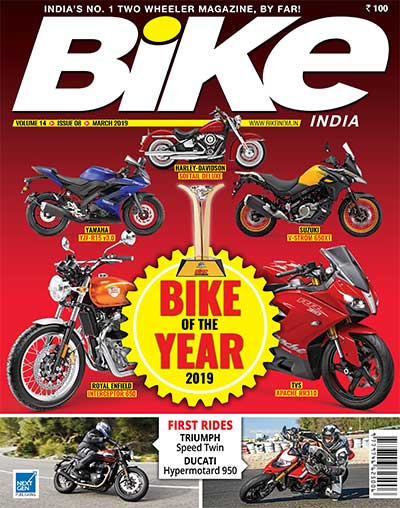 AT THE VERY OUTSET I WOULD LIKE TO CONGRATULATE ARAVIND KP FOR FINISHING THE Dakar Rally. The issue of Indian riders not being able to compete with their international counterparts and fighting for podium positions in any form of motorcycle racing, be it motocross or racing on the tarmac, still remains. In this issue we have done an interview with Aravind KP in which he mentioned that this time he was riding between 65 and 75 per cent of his riding capability and that this helped him in not crashing during the raid. Because our boys lack the out and out speed of the international riders, they have to ride at 100 per cent, or even beyond that, just to keep up with a top-class rider.

The solution to this is to start racing at the age of four or five years and racing with better
riders. It should not matter to you that you are not winning races; your aim should be to
become a faster and better rider and then success will automatically follow. For me, finishing
the IOM TT race was more satisfying than winning all the races I have won put together.

Last month we gave away the Bike India Awards. We had 34 two-wheelers vying for those. As many as 13 sub-200-cc motorcycles were launched during 2018 and there were 19 premium motorcycles contending for the Two-wheeler of the Year Award. After facing competition from the best in the world, the Royal Enfield 650 Interceptor was crowned the Two-wheeler of the Year. The Royal Enfield team, led by Siddhartha Lal, deserves all the accolades, for they have created a fantastic motorcycle. It is not that they made an excellent motorcycle and priced it out of the reach of the enthusiasts; their pricing is the real icing on the cake.