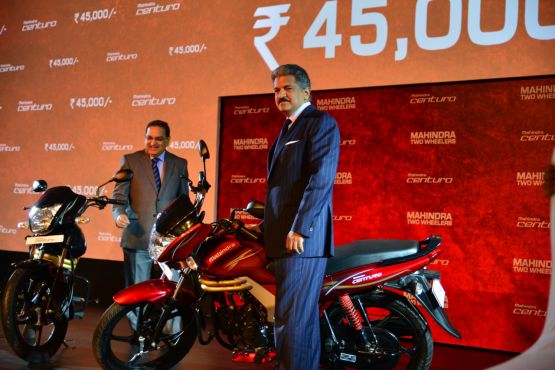 Mahindra Two-Wheelers have introduced their second motorcycle in India packed with interesting features and featuring an aggressive price-tag.

The 110-cc Centuro has been designed entirely in-house at the Mahindra Two Wheelers’ R&D Centre in Pune, in a bid to emerge as a serious player in the Indian two wheeler market.

Speaking on the launch, Anoop Mathur, President, Two-Wheeler Sector and Member of the Group Executive Board, Mahindra & Mahindra Ltd. said, ‘In the next two and a half years, Mahindra would churn out about ten new models of scooters and motorcycle in India.’ This would include a woman-centric scooter and performance-oriented motorcycle, which could be the much debated Mojo 300-cc, before the end of the current financial year.

Click to read our first ride report of the Mahindra Centuro.