Royal Enfield invited us to Goa between 10 and 14 July for their Unroad event. All I can say after participating in it is: what an adventure of a lifetime! 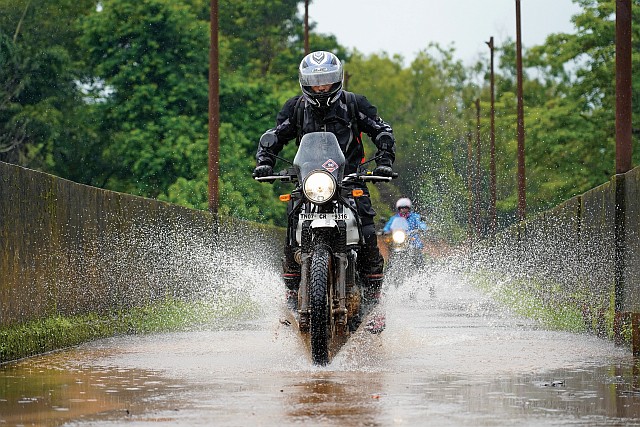 If you’re wondering what Unroad is, it’s a more hardcore version of off-road trails that requires a rider to understand, adapt to, and overcome any situation that they may come across. Teamwork was one of the most important factors when it came to conquering the harsh trails that we crossed. What made this Unroad experience even more intense was the heavy downpour throughout which further worsened the off-road trails. The ride was a variety of off-road trails stretching over 300 kilometres that would start at Varca and culminate at Chorla.

There were riders from Pune, Mumbai, Chennai, Bengaluru, and even someone coming to Goa all the way from Chhattisgarh. The first day (or, as we called it, “Day Zero”) was all about introductions and briefing. We were introduced to the leaders for our ride, Arjay Pramanik and Shawn Dsouza, who treated us like their best buddies and made sure the group had a good laugh in any situation. The briefing sessions gave us a good idea of what we were getting into, since it was going to be the first Unroad in the rain. We were all hyped and prepped for the adventure-packed journey we were heading out for.

Day One
The first day begun early in the morning with the rain pouring down on us. Riders geared up and headed for breakfast. There was another short briefing session by Nilesh Dhumal. He explained to us the ethics and techniques of off-road riding. I was handed a white Himalayan that was ready to take on parts of Goa that nobody would think of taking a bike to. A majority of the bikes were Himalayans but there were also a few Classics, a Thunderbird, and even a Machismo.

The ride on the first day consisted of two off-road trails to reach Mollem. It was led by Altaf Khalifa, who navigated us through the trails that he knew like the back of his hand. The first trail was a slushy patch alongside a canal where we started off. The trail stretched over a few kilometres and had parts where I just prayed for the front tyre to find grip and keep me from falling.

After taking a break, we headed for the second trail which left an imprint that I would never forget. The reason for this picturesque memory was the fact that Royal Enfield had obtained permission for us to ride through the Netravali Wildlife Sanctuary. The climb up the wildlife sanctuary became intense with every passing moment, but, thanks to amazing teamwork, we were able to conquer the trail until we reached the top where we found a water crossing so deep, it almost made one of the Himalayans float away. After heading back down, there was a challenge: finding a route to our next hotel, since the roads we had to head back through were flooded with water almost three feet deep. Something that all riders learned on the first day was the importance of letting go of the clutch, holding the handle loosely, and confidently letting the motorcycle manoeuvre its way through slush, stones, and water. 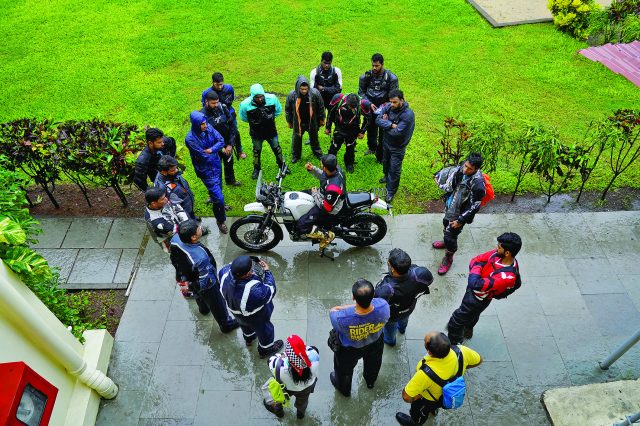 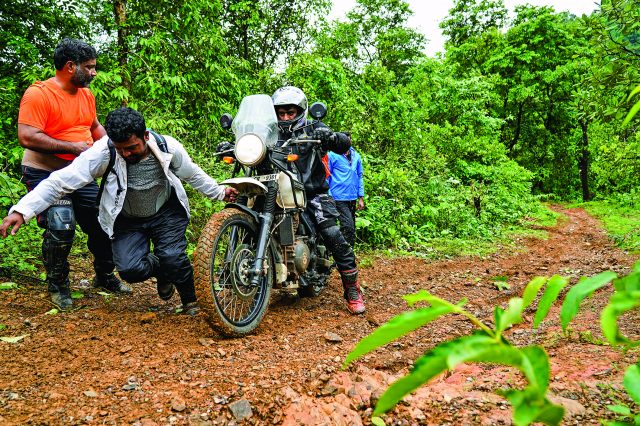 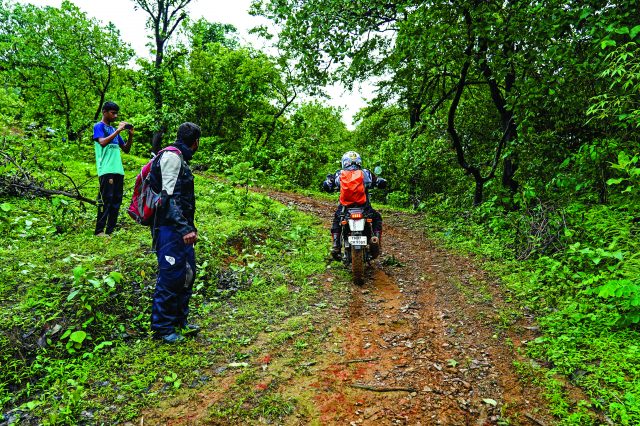 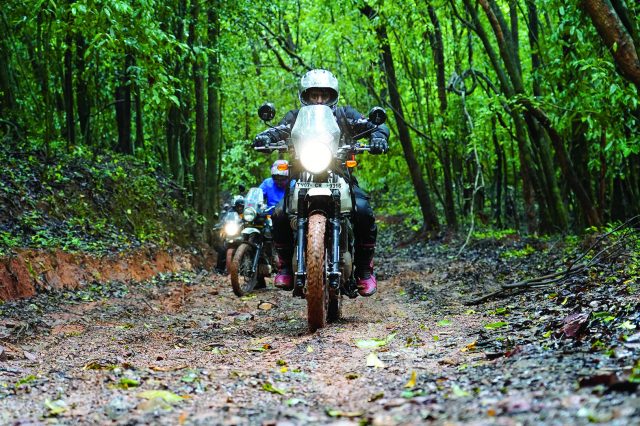 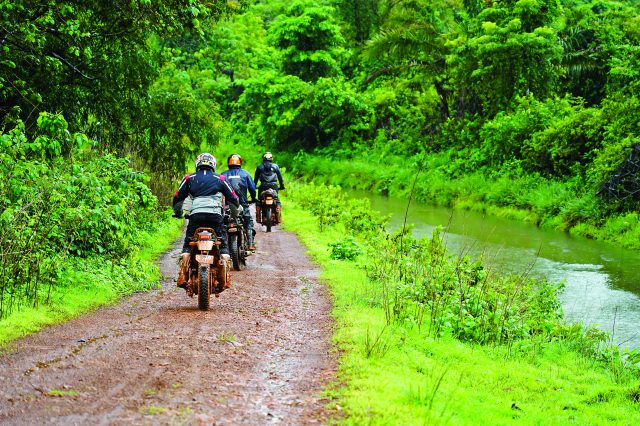 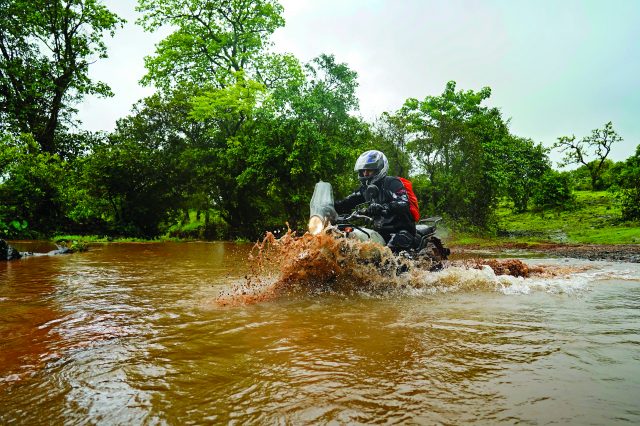 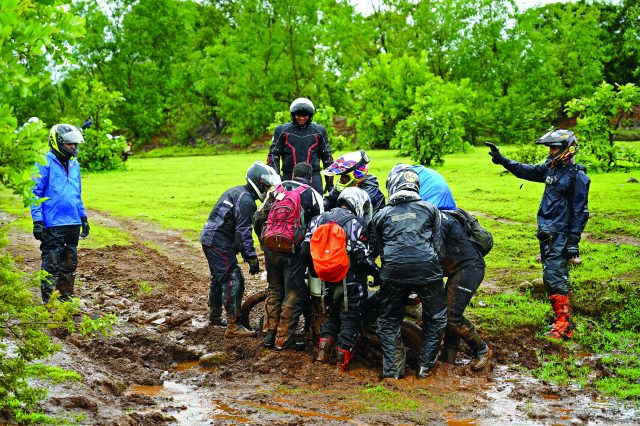 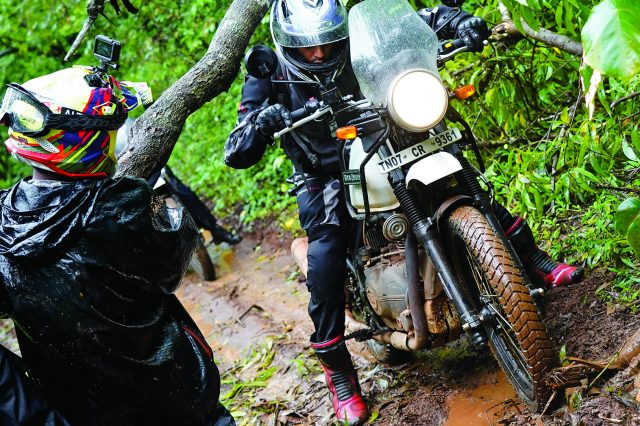 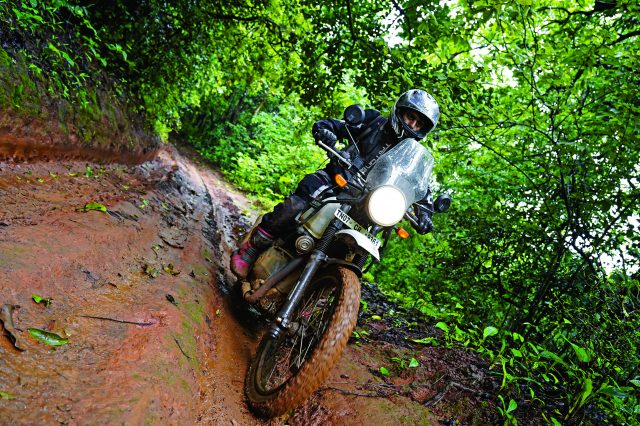 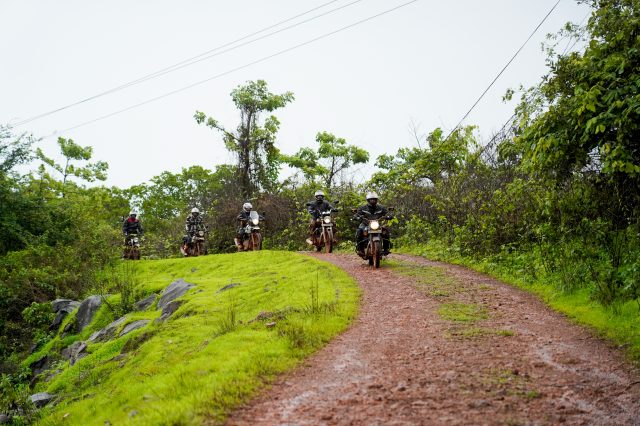 Day Two
For the second day, there was an optional trail, called the “Cliffhanger Trail”. About 10 riders decided to tackle this action-packed trail. It was decided that the rest of the riders would meet us at the end of this trail where we would head on to the second trail for that day.

The trail consisted of a steep climb up a hill, with a narrow path meant for trekkers going up to the top. One side had the wall of the hill and the other side was a drop into the trees. The best way to take on this steep trail was to keep the motorcycle in momentum and avoid releasing the throttle or suddenly applying the brakes. Each section of this tricky route was tackled with the teamwork of the riders who helped every individual bike make it to the top. Unfortunately, we took longer than expected and hence a decision was made to cancel the second trail for the day and head to our place of stay.

Pulling bikes out of tricky situations on the steep and narrow climb was surely exhausting, but we enjoyed every bit of it. The route to reach our next resort was via Chorla Ghat. We rode through dense fog with low visibility to finally arrive at Shathavari Eco Resort, which was a truly unique hotel that had small cottages and tents spread over a vast area. The volunteers for the Cliffhanger Trail sure got a little confident riding off-road after the end of the day. Day Three
Due to the circumstances witnessed on the second day, the last day’s plan was to complete three trails before concluding our Unroad journey. Due to continuous rain, the routes on the last day consisted of multiple water crossings and more slush than ever. We started early and got to our first trail that was a ride through a deserted area that passed through a small village. The route consisted of flat land and wasn’t as steep as those on the previous two days, but the deep slush surely made it interesting and challenging.

The second trail was another canal trail like that on the first day with amazing views and small water crossings which we waded through. The last and final trail was a route through a small hill with waterfalls that would finally lead us to our hotel. The last day had some fun challenges and the highlight of this day was a landslide that blocked our route. Needless to say, we put our Royal Enfields up to the challenge and conquered every obstacle as a team to be greeted by success.