KTM has just unveiled the E-SPEED electric scooter and it is indeed a very exciting looking creation. There is a hint of jet-ski and several obvious styling touches which make it unmistakably KTM; chief among them being the orange chassis and 14-inch alloy wheels. The juice comes from a 4.336 kWh lithium-ion battery pack which powers an electric motor paired to a belt drive. It takes just two hours for a full charge using a household plug socket. While output figures or range weren’t mentioned, we’re sure they will be enough for a capable city runabout with a fun factor on the higher side. A single-sided WP suspension setup is offered, while 220mm disc brakes with ABS and regenerative braking complete the package.

KTM CEO, Stefan Pierer did mention that “vehicles like the E-SPEED and Freeride-E will help powered two-wheelers win back more acceptance in society”. This does seem to point in the direction of it becoming a production reality sooner rather than later. 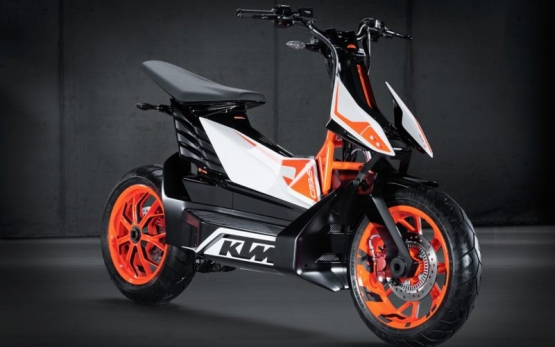