The King of the Muntains, John McGuinness overcame a one-minute penalty to claim third in this year’s Superbike TT race, also increasing his own outright lap record to 212kmph on the final lap. Donned in Joey Dunlop replica livery to commemorate 30 years since the Ulsterman won his first TT for Honda, McGuinness dropped from second to fourth as a result of the penalty, issued for exceeding the 60kmph pitlane speed limit, but fought his way back to claim his 37th TT podium. He found himself down in fourth at the end of the opening lap, a speed of 209kmph leaving him 8.7s adrift of team-mate Michael Dunlop. Increasing his pace to 209.77kmph on the second lap of the famous Mountain Course, John moved up to second by just 0.5s from Guy Martin although he slipped further behind Dunlop to the tune of 15.4s.

However, with a superb pit-stop by his team, John left the pits six seconds quicker than Martin thus giving him some breathing space over his Suzuki rival and by half race distance he was 16 seconds clear. With the race settling into a pattern, Dunlop was secure in the lead just as John was secure in second but all this changed after the second round of pit stops at the end of lap four when John failed to hit his pit lane speed limiter button. It all meant he went down pit lane at 77kph and incurred a one-minute penalty as a result dropping him back to fourth and with seemingly no chance of a podium position.

Showing his usual skill and determination though, John flew on the final two laps and from being 12 seconds down on Martin, he ended the race 6.9s clear to take the final podium spot and increase his own outright lap record, set in 2009, to a stunning 211.9kmph.

Speaking afterwards, John commented; “I gave it my all and couldn’t have ridden any harder in that race. I pushed and pushed and if it hadn’t been for some of the later runners, I think that final lap could have been 212.4kmph but you can’t win them all. Speeding in pit lane was my fault so I’ll take it on the chin but to come back to third after being docked a minute is pleasing. I don’t know what happened in the pit stop to be honest, maybe I got a bit unsighted by Cameron (Donald) and I got distracted and if you don’t press the button, you run the risk of breaking the speed limit.”

“I was a bit surprised by the pace on the opening lap and being back in fourth, and a fair way back, gave me a lot of work to do but I got back up to second. By that stage, there was nothing I could do about Michael – who was riding superbly – but I felt comfortable in second until the penalty and then I had a lot of work to do. Setting a new outright lap record is some sort of consolation and if I hadn’t finished on the podium with that final lap, I’d have been disappointed but third given the hiccups is pleasing. I felt fit and strong on that final lap and it shows that even though I’m fat and old, I’ve still got the pace to do some fast laps so, hopefully, we’ll be closer in the Senior. It’s been a real honour to wear the Joey Dunlop replica helmet and leathers today and I hope I’ve been able to do the Dunlop name justice.” 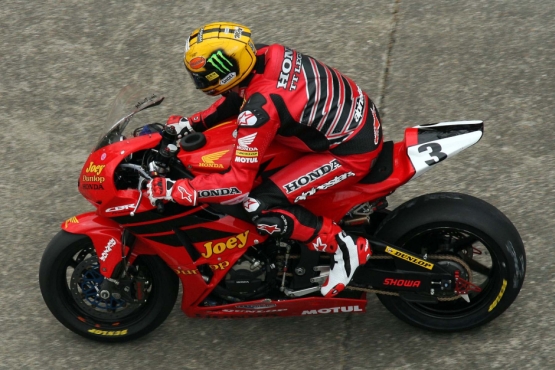