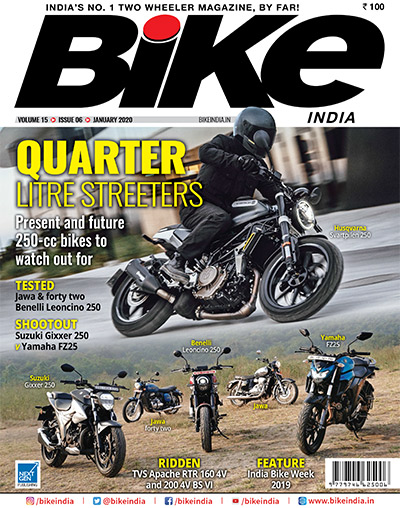 This is the first editorial of 2020 and we have a new brand of motorcycles launched in India in the form of Husqvarna. The Swedish brand is owned by KTM and will be sold through KTM dealerships.

The India Bike Week (IBW) was held on the 6th and 7th of December and drew a record crowd.

It is that time of the year when the Indian Motorcycle of the Year (IMOTY) is held and the jury consists of all the leading motorcycle and auto magazines and websites. Unlike last year, when we had a runaway winner in the Royal Enfield 650 Interceptor, this time the competition was closely fought and the winning margin was just one point and the winner was Hero Xpulse 200. It is not just about making the best motorcycle, but it also has to be value for money. The Jawa motorcycles were launched in December last year and now, after one year, we have still not been able to get our hands on the bikes for a road test. One wonders why it took so long to give us the bikes for a road test. Had it not been for the IMOTY jury round on the 2nd of December, we would not have got the bikes. That apart, copying the old Jawa to such an extent as the stance of the motorcycle — the tall front end and squat from the rear — restricts the suspension travel and that forces them to go for a stiff suspension set-up. On the positive side, the low stance at the rear makes for a low saddle height, thus making it easy to manoeuvre the motorcycle. It is easy to ride the bike in city traffic thanks to its low seat height along with low gearing and strong low-end and mid-range performance. However, if you compare this motorcycle with the Suzuki Gixxer 250, which was on test simultaneously, then it falls short in all departments.