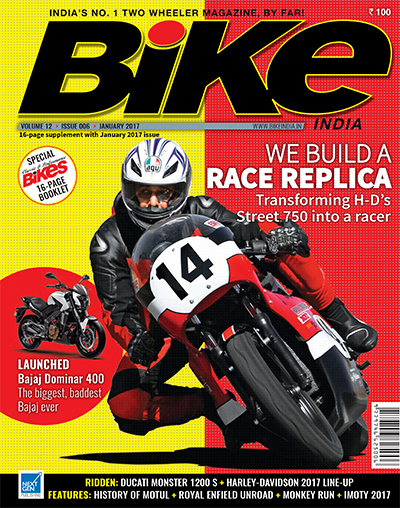 Something Attempted,
Something Done…

THIS IS MY 10TH YEAR AS THE EDITOR OF BIKE INDIA AND I have a very special treat for you. Everybody tests bikes and reviews them but we are different: we test a bike and, in case there is problem, we just don’t point it out; we also help the concerned manufacturer solve it.

The first case in point for Bike India was the Honda Shine. When I tested the bike, I found it to be under-geared. As a result of this the bike would be prone to vibrations once the speedometer needle crossed 65-70 km/h. Fitting a gearbox sprocket one tooth bigger solved the problem and also improved the motorcycle’s performance and fuel efficiency. The second project was the Yamaha Gladiator with a mono-shock suspension.

When Bajaj launched the Pulsar AS 200, it was the NS 200 with a half fairing and a different rear mudguard. When I asked Eric Vas why the bike did not have a long-travel suspension and different wheels, he asked me if I was ready to undertake the change to improve the AS 200. It would have been very easy to put long-travel front forks and rear suspension but the idea was to modify the existing forks and rear mono shock for the extra travel and that is what I did, along with fitting 17-inch rear and 19-inch front spoke wheels. The stainless steel free-flow exhaust now exits from under the seat.

The treat for you this month is the Harley-Davidson Street 750 customised into a race replica of the XRTT 750 ridden by Calvin Rayborn. When I was about 10 years old, Calvin Rayborn used to ride a cast-iron engine Harley-Davidson and win races against modern motorcycles. Today I have built a motorcycle as a tribute to him. You may read the detailed story in this issue.

I would like to wish all the readers a happy New Year. Please ride safely and never drink and ride.