Indian Motorcycles, on their way to making a huge comeback, is closer to launching their all new Thunder Stroke 111 cubic inch (1,811cc) air-cooled V-twin engine and a new six-speed transmission to go with it. The new engine has a 49-degree cylinder angle and runs a 101mm bore and 113mm stroke. Designing the engine wasn’t easy as it needed to combine essential modern technology with special Indian features. The resultant engine uses 2 valves per cylinder with parallel stems. As per the design, each intake port is designed to approach the intake valve at a tangent. This ensures a charge swirl which generates turbulence that accelerates combustion a great deal. The faster the combustion, the lesser the heat lost in the process. The cylinder bores are also hard plated, eliminating the insulating effect and weight of an iron liner. The result is a cooler running engine with added piston durability. All of this means it can run a higher compression ratio – 9.5:1, which directly improves torque output while also delivering better fuel efficiency. The torque output is stated to be over 156 Nm; power output will also be in an equally healthy league. The firing order is close so as to maintain the exhaust note’s distinct identity.

The gearbox has been designed especially to take advantage of the new engine configuration. Only the first gear ratio is straight cut; second through six uses quieter helical gears. More teeth in a simultaneous mesh mean a softened load and increased capacity.

The new engine will soon be seen on one of the forthcoming Indian models. The brand is seen by many as the only name iconic enough to take on Harley-Davidson on American soil when it comes to the heritage and timeless designs associated with their motorcycles.

Now that Polaris Industries own the Indian brand, we reckon there’s a high possibility that they will bring in the revered marque to our shores soon. 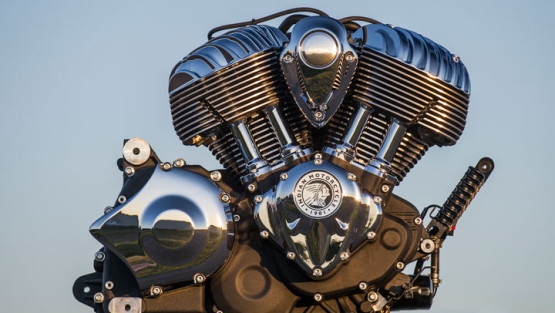