We embark on a trip to the land of the rising sun for the Honda Sunchasers ride experience and spend six days riding amidst the enthralling beauty of Arunachal Pradesh. 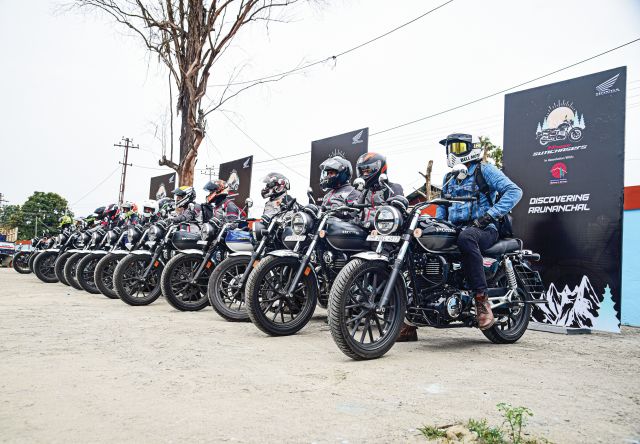 Honda Sunchasers was the first-of-its-kind ride experience organized by Honda Big Wing in India. In this ride, we were invited to cover over 1,000 kilometres in six days in Arunachal Pradesh on the H’ness CB350. The event was organized in collaboration with Arunachal Tourism as the state aims to become a tourist destination in the coming years. This scenic state is known as the “Land of the Rising Sun” or “Land of the Dawn-lit Mountains” and is spread over an area of 83,743 square kilometres. According to the latest online research, Arunachal Pradesh has a population of approximately 17 lakh and is a diverse state with its inhabitants belonging to various tribes. 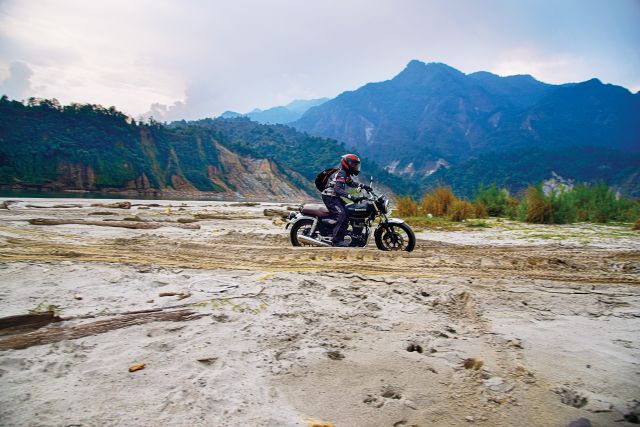 The state shares international borders with Bhutan in the west, a disputed border with China in the north, and Myanmar in the east. We were accorded a warm welcome marked by great hospitality and grand dance performances at every location that we visited during this ride. One of the salient aspects of Arunachal Pradesh is that it is untouched by “civilization” and is rich in mesmerizing views of nature spread far and wide. It is said that most of the state (about 60 per cent) boasts of dense forest cover. As explained to us in the evening by our main lead rider, Vijay Parmar, we were in for an exciting adventure spanning some of the best locations discovered and recced for us by the Xplore Earth team. Shayne Singh and Ravish Sharma were the other lead riders from this team and they accompanied us on the trip astride Honda’s flagship ADV, the Africa Twin. 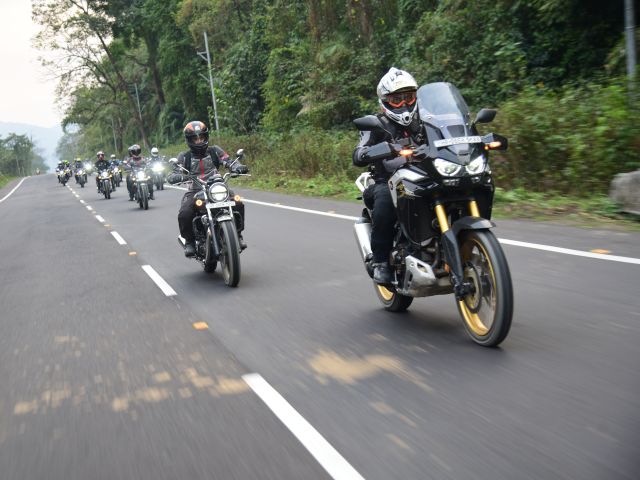 On the first day, all of us geared up and got astride the H’ness CB350s that were handed to us. The ride started from Dibrugarh in Assam, with the first stop-over around 115 km away at Ruksin, which is where we entered Arunachal Pradesh. The local people welcomed us with a tribal warrior dance after which the local speakers gave us information about the interesting treasures that Arunachal has to offer. A proper flag-off ceremony took place and the riders headed further to the next stop for lunch at Pasighat, one of the oldest towns in this state. The day came to an end with a crazy stretch of tarmac spread around the mountains between Pasighat and Bomjur. It turned out to be a fairly easy task for the H’ness to cover over 200 km on the first day of the ride.

As for the locations we crossed en route, it is difficult to express in words the beauty and the cleanliness of the place; it is almost as if one is not in India any longer! Oh, and how can I forget to mention: we found out that Arunachal Pradesh is completely COVID-free. 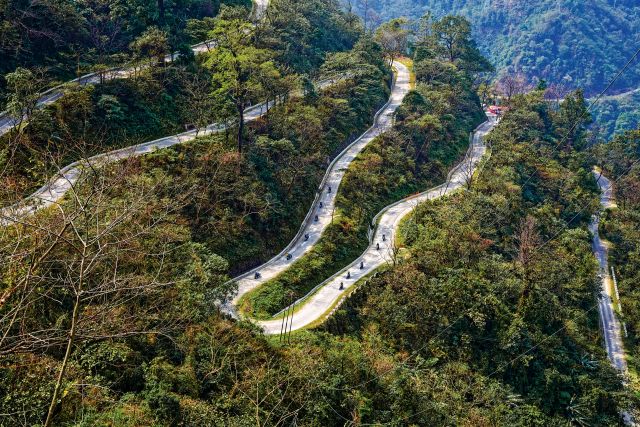 At Bomjur, we stayed at a small eco-camp consisting of tents and huts. This camp faces the Dibang River, one of the tributaries of the mighty Brahmaputra. This is a place worth visiting, for it gave us an authentic and traditional feel of how the local people lead their lives. By then, I was really taken up with the varied cuisine comprising new dishes for every meal and, at every other location, finding out more about the local customs and traditions. 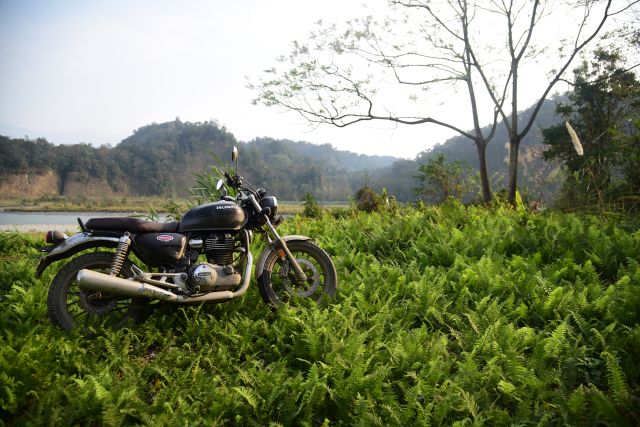 Next day, we started from Bomjur for Hawa Pass and Udayak Pass through Tezu, which is the fifth-largest town in the state and is reputed to be the most developed one. The roads leading up to the Passes just got better than the ones traversed the previous day and cruising at 110 km/h on the open stretches of highway felt as if one was doing just about 60 km/h. That is how smooth the tarmac was. Complementing the ride was the H’ness CB350’s exceptional ride quality. Leading up to Hawa Camp, the roads became twisty and narrower as we caught glimpses of the splendid Lohit Valley. Some us even ventured further to Udayak Pass, which is located slightly higher and offers an even better view of the Valley. At this point, we were just about 250 km away from the India-China border. The day came to an end heading back to our eco-camp in Bomjur where we stayed for another night. 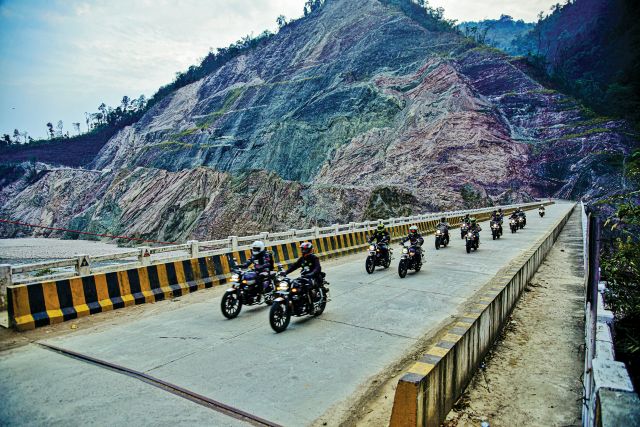 For the third day, we rode from Bomjur to Miao, around 170 km away. Miao is located in the Changlang district and situated about 25 km from the Assam border. The ride until here was peaceful and all about embracing nature on the way but things were about to get very interesting. We rode from Miao into the Namdapha National Park, the fourth largest national park in India. It was for the first time that we were going to get a chance to ride the bikes off road. Just before we entered the jungle trails, we arrived at the biggest water crossing we were going to witness on this trip. It was great fun making big splashes with the H’ness CB350 followed by slipping and sliding through the trails to get to the Namdapha Camp, a resort with tents, huts, and a few rooms. This was a much-needed getaway from civilization with no mobile phone coverage at all. Roughing it out as you should on a motorcycle ride was what this day was all about and what a spectacular adventure it turned out to be! We were up again at 5.30 am to explore the trails with the bright morning sun shining down on us through the vast greenery. 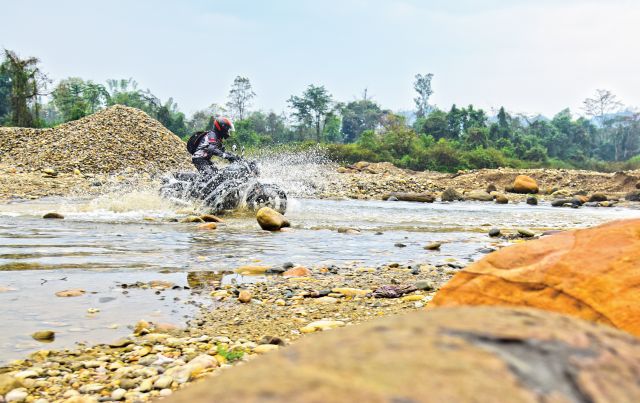 The next day, we headed out of the forest towards Pangsau Pass. This hill is 3,727 feet in altitude and lies on the crest of the Patkai Hills on the India–Myanmar border. On this day, we got to chase the bright morning sun through the twisties of the newly constructed Stilwell (or Ledo) Road. Nampong was the last town on the Indian side on the Stilwell Road. It was a climb of around 13 km before arriving at Pangsau Pass, which was also called the Hell’s Pass and Nampong considered the gateway to Hell’s Pass, to finally arrive at the border. Thanks to the special permissions already obtained by Honda, we were allowed to step across to the other side of the border and get a good view of the “lake of no return” in Myanmar. 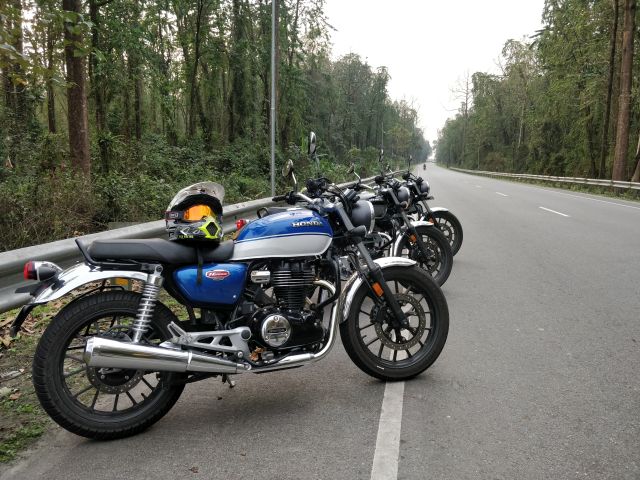 All in all, some of the best roads we encountered and, to top it all, it was a crazy thrill for me getting to walk in between international borders for the first time. Finally, the day came to an end with a traditional meal spread out for dinner as we halted for the night in Miao. From here onwards began our journey back to Dibrugarh with a stop-over at the Golden Pagoda Eco Resort in Namsai for a day. This is a property spread out well and is located near the Golden Pagoda, which is a Burmese-style Buddhist temple that was opened in 2010. There are also two large Buddha statues that have been built close to the place, of which we got a chance to visit one on the way to the Eco Resort.

The following day, we were given a proper flag-off for the last leg of our ride from the Golden Pagoda by the Buddhist monks. We headed back via a different 110-km-long route which was quite a peaceful ride with large tea plantations spread alongside on the way to Dibrugarh, where the ride culminated. 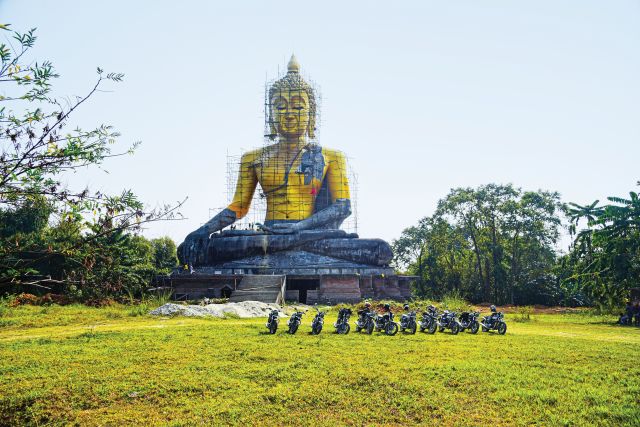 Covering over 1,100 km around Arunachal on a motorcycle was unquestionably the highlight of this year. As a biker, there is not more that you can ask for. A beautiful and scenic location, untouched by civilization, with welcoming locals, great hospitality, and, by way of the cherry on this delectable cake, some of the most open and well-paved roads. As it turned out, it was an intense way to experience Arunachal Pradesh for the first time ever. The H’ness CB350 was really put through its paces over the span of this ride and it did not disappoint, be it on the road or off it. Thanks are due in no small measure to Honda for organizing this ride and to Arunachal Tourism for their hospitality. We hope to see Honda continue with these ride experiences and make them a regular affair in the forthcoming years. Maybe, next time we will get to do a more adventurous ride on the CB500X?