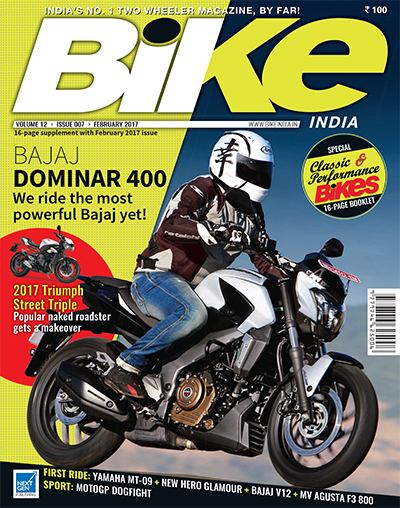 TEAM HERO MUST BE ON TOP OF THE WORLD WITH THE result of their début Dakar Raid. A top-10 finish and C S Santosh getting his second finish in 47th place are no mean achievements. Most people will say he only finished 47th. Let me tell you just finishing the Raid is a big achievement in itself; it being the toughest motor sport event in the world. This is Santosh’s second Raid and he has finished both times. Hats off to you, Santosh!

The annual Union Budget will be out soon and I hope the government gives us one that will boost the economy and the two-wheeler sales after the recent demonetisation.

Last month I was in London for the launch of the new Triumph Street Triple. The outgoing Street Triple is one of my favourite motorcycles for it has the right mix of power and handling, making for an excellent package, and the new one is going to be even better as it is lighter and has gained 90 cc in capacity. The power and torque have also gone up and the bike has shed a couple of kilos. This will make it even more nimble and agile, even more fun to ride.

The TVS RTR was crowned the Indian Motorcycle of the Year (IMOTY) 2017.