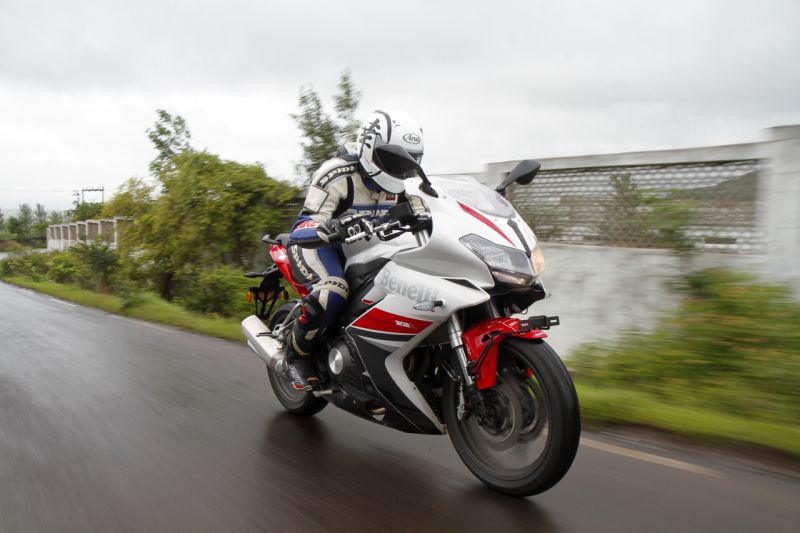 Design
Like most Italian designs the DSK Benelli 302R is quite appealing, right from the intricate headlight design, exhaust, and the shapely fuel tank. If you remember, we had exclusively ridden the pre-production version of the bike last year. The bike now gets a few minute but welcome changes such as an all-black frame, instead of the earlier red, and the exhaust has some more detailing on it. More importantly, the bike we rode last year had far too many monikers on it, which have all been removed. It’s just the ‘302R’ now. 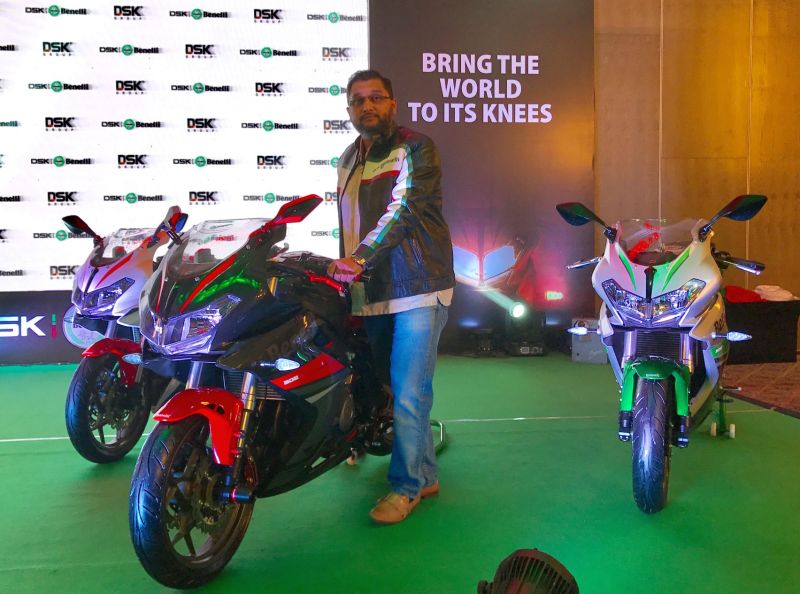 There are three colour options to choose from including – White Rosso, Red Nero and Silver Verde. The mudguard-mounted front number-plate and saree-guard try to spoil the party, yet it manages to have a sporty racebike-like appeal.

Engine
This is the first fully-faired motorcycle from DSK Benelli, but it shares quite a few parts with it’s street-bike sibling, the TNT 300. The 302R borrows its powertrain from the TNT 300 street bike. The 300-cc, parallel-twin is liquid cooled and comes mated to a six-speed gearbox. Like its sibling, it produces 38.8 PS and a peak torque of 26.5 Nm. The gear-shifts are smooth and precise, but it did surprise me once with an uncharacteristic false neutral. 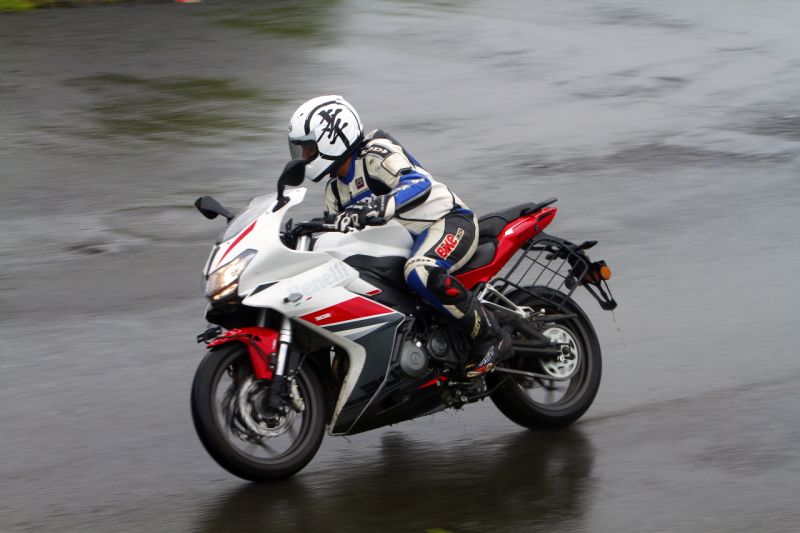 Performance
It’s a fairly peppy machine but somehow the power seen on paper doesn’t meet the expectations on road. Probably because of the kerb weight of 198 kg which doesn’t help its power-to-weight ratio.
However, the short gears make it very ideal for city use, and in sixth gear it can effortlessly cruise at 140 km/h. The beauty of this motor is its ability to gather speed from as low as 30 km/h even if it’s slotted in top gear. There’s absolutely no engine knocking, forcing the rider to shift down. It’s a bike that’s best enjoyed cruising on, than being revved to the limit.

Sound
We had to dedicate a special section for ‘Sound’ simply because the 302R has a fab exhaust note. The underbelly exhaust box has not been carried over from the street bike, but the sport-tourer gets a conventionally positioned double-barrel kit. The twin-cylinder bike’s exhaust note is perfectly raspy and reminds us of old-school two-stroke bikes of yesteryears. 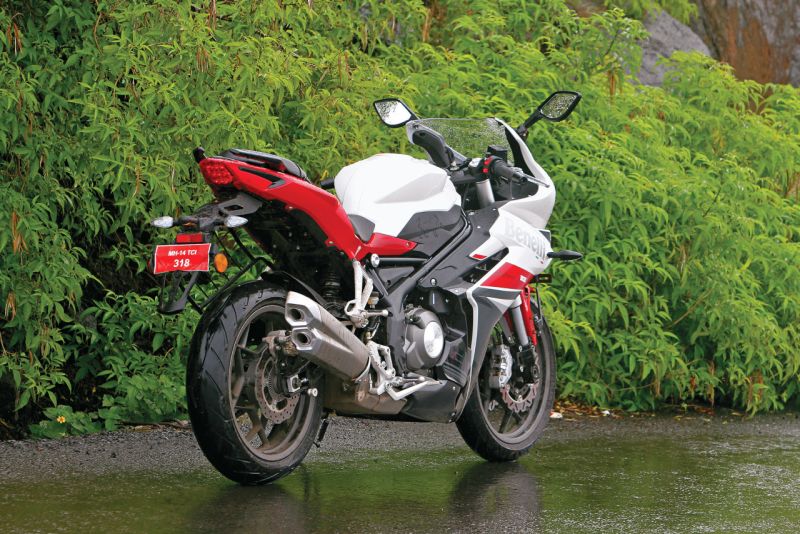 Handling
The 302R is also agile and handles well. This credit goes to the rigid frame and suspension setup. The chassis is similar to the one seen on the TNT 300 but has been tweaked for this sports-tourer. The front gets a meaty 41-mm upside down (USD) fork and at the rear is a centrally-mounted monoshock (not side-mounted as seen on its sibling), the latter being adjustable for preload. The setup is on the firmer side, which endows it with nimble handling. It’s in between the KTM RC and Kawasaki Ninja 300.

The footpegs aren’t very rear-set and we did find it to be a low – a feedback we shared with DSK Benelli after our ride last year. We were happy to see sleeker footpegs on the current bike which managed to stay clear off the tarmac. And we must also mention the Metzeler tyres which did a fabulous job of sticking to the drenched road. 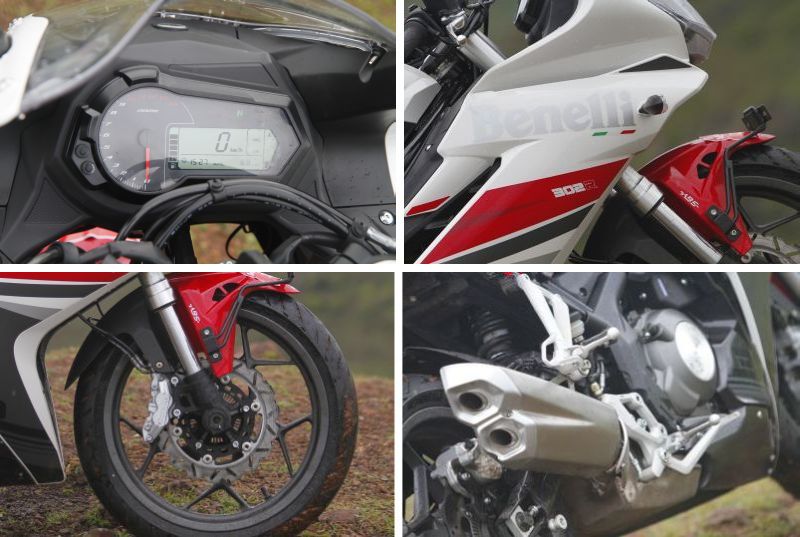 Features
The 302R gets an analogue rev counter with a digital cluster to give out information such as the speedometer, gear indicator, fuel-gauge, trip meter, and even a clock. There are twin discs up front and a single disc on the rear, along with an adjustable brake lever. Thankfully, now the bike is equipped with ABS which has become a must nowadays, and this one can be switched off if desired. 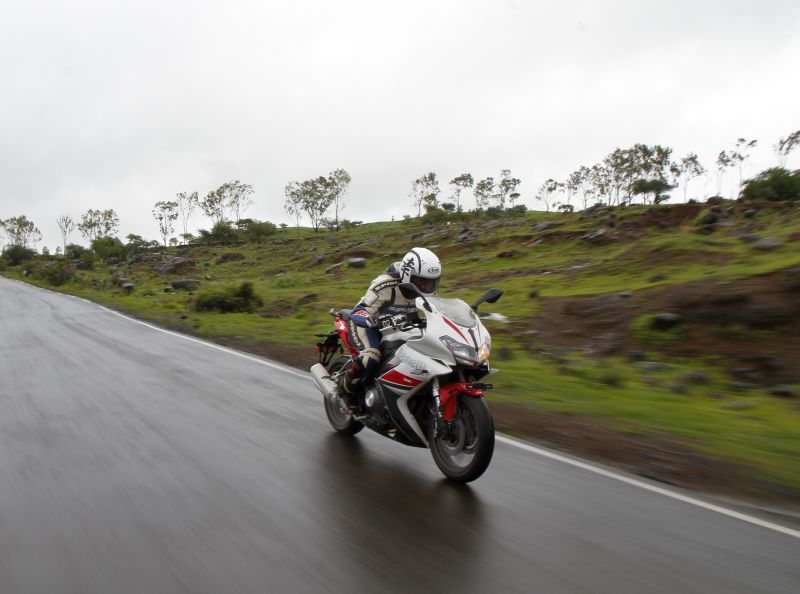 Fuel Economy and Price
With its 14-litre fuel tank and an average fuel economy of about 25 km/l it should be able to cover 350 km on a full tank. The DSK Benelli 302R is being imported to India as Completely Knocked Units (CKD) and is assembled by DSK Motowheels at their plant in Maharashtra. The bike has been launched at Rs 3.48 lakh (ex-showroom) which positions it between KTM RC 390 and Kawasaki Ninja 300.