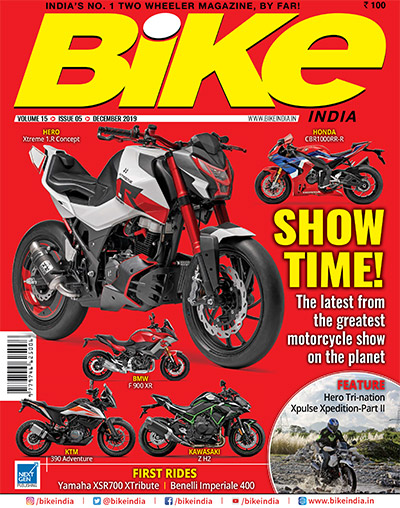 Let There Be Sunshine

THE BIGGEST MOTORCYCLE SHOW IN THE WORLD, EICMA (MILAN MOTORCYCLE SHOW), was held in the first week of November. All the global manufacturers put their best foot forward with their best models for this show and this year was no exception. Honda showed their CBR1000RR-R superbike that is ready to take on the likes of the BMW S 1000 RR and the mighty Ducati Panigale V4 in the horsepower race with an output of 217 hp. The Honda CBR was only one of the many show-stoppers. KTM and Ducati also had some phenomenal bikes on display. You may read a detailed report of the show in this issue.

With the onset of winter, we look forward to some invigorating sunlight after a prolonged monsoon this year. This will also give me an opportunity to put some miles on my long-term Royal Enfield 650 Interceptor. The winter weather is great for riding, although there is one downside to it: pollution. Automobiles are considered to be the prime cause of pollution, especially in our capital city, New Delhi, but nobody is willing to consider other culprits such as construction, coal-fired power stations, and industries spewing out harmful pollutants.

The new Motor Vehicle Act and the provision of heavy fines in it seemed to have a positive effect for a few days as people began obeying traffic rules and stopping behind zebra crossings. Now, however, it is back to square one with rampant riding/driving down the wrong way, jumping traffic signals, and not caring two hoots for traffic rules in general. The traffic police need to come down heavily on the offenders and book them.

The month gone by witnessed a rise in the sale of two-wheelers due to the festive season. Now let us see if the market can keep up the momentum over the next couple of months.