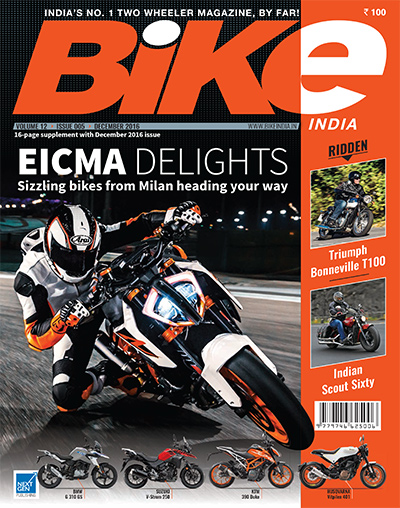 YET ANOTHER YEAR COMES TO AN END: 2016 SEEMS TO HAVE gone by very quickly, which means that we have been very busy throughout the year. More than 30 new two-wheelers were launched during the year. Incidentally, you may have your say in the Bike India Readers’ Choice of the Year Bike 2017 by sending your vote.

At the moment, there is complete chaos in the market with the Rs 500 and Rs 1,000 notes demonetised. We may expect a drop in the sale of new twowheelers for, at least, the next three months since people hardly have liquidity and, therefore, are less likely to buy new motorcycles and scooters.

We are happy to announce that from the December 2016 issue onwards we are going to give you more value for your money with a 16-page special supplement on high-end racing, performance bikes and classic motorcycles.

There is an in-depth report on the EICMA (Milan motorcycle show) in this issue. A number of new launches took place there and, happily for us, quite a few of them would be coming to India.

Last month I was at the world premiere of the Triumph Bonneville Bobber as the only journalist from India and one of eight from across the globe to take part in a celebrity all-star drag race against the likes of Freddie Spencer and Carl Fogarty. To take part and meet racing legends like Fogarty and Spencer was like a dream come true. Known as Fast Freddie, the naturally gifted and talented motorcycle rider is an all-time great racer. Spencer is the only rider in the history of world motorcycle road racing championship to win the 250-cc and the 500-cc championship in the same year. When I spoke to him, he was very humble and down to earth. For me it was one of the best evenings of my life. Indeed, it was a real honour and pleasure to meet Fast Freddie.