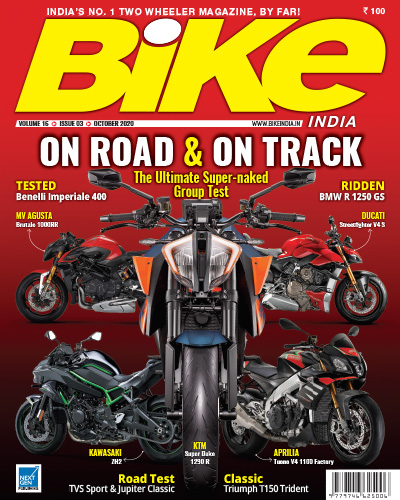 Alas, It Still Is a Bleak Scenario

Uncertainty continues to haunt the economy as COVID-19 cases keep mounting with more than 90,000 cases being reported daily. Going by the fact that the government of Maharashtra is enforcing Section 144, it looks like a long haul before we can see some sort of normality returning and, by the look of it, the vaccine seems to be quite some distance away.

Most people have taken a salary cut; I would say the lucky ones still have a job and the unfortunate ones have lost their jobs and their means of livelihood. There is no sign of a stimulus package in the near future and, to make matters worse, fuel prices continue their northward trend, thus making the ordinary citizen the worst-hit as they have to shell out more for the daily commute and for all the essential commodities.

With Bharat Stage VI norms coming in, we have been testing all the new BS6 variants and what we have found is that most bikes have suffered a drop in performance even in spite of some manufacturers increasing the engine capacity to make up for the decrease in performance.

The ban on import of goods has resulted in a shortage of tyres for the high-end bikes. As one of the manufacturers said, they do not have a stock of tyres for most of the big bikes.

The sale of entry-level two-wheelers has gained some momentum over the last couple of months as people prefer to use their own transport rather than relying on the inadequate public transport system.

The bike we are looking forward to is the all-new Royal Enfield Meteor. It will be a 350-cc single- cylinder motorcycle and its engine has been derived from the 650 twins. It will have a four-valve cylinder-head and it should be a refined powerplant. Since the 650-cc Royal Enfield twins have set the bar high, our expectations are also just as high and we are looking forward to riding the Meteor next month.