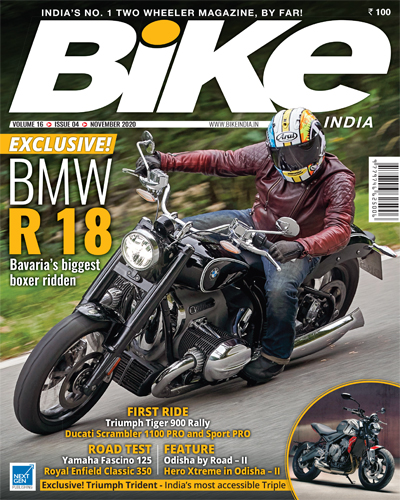 We are in the midst of the festive season and we hope to see a surge in two-wheeler sales following the prolonged slump due to the countrywide lockdown.

It was during this period of lockdown that India moved from BS4 to BS6 and because of that we are re-testing all the existing bikes for performance figures. Some interesting facts have emerged from these tests. While most of the bikes have become slower, surprisingly some have become quicker. While most have gone for an additional catalytic converter in the exhaust bend-pipe, some have managed to achieve the emission figures with a single cat in the silencer.

There is only one industrialist in the country who has the guts to call a spade a spade and that is Rajiv Bajaj who has once again taken a stand not to advertise on any of the news channels that spew venom and create hatred amongst people. Now Parle G have followed suit and I hope more advertisers do the same. Hats off to you, Rajiv Bajaj, once again for taking this stand.

All of a sudden, every manufacturer seems to want a share of the pie in the classic retro segment dominated by the Royal Enfield 350 Bullet. First it was Jawa 300, then Benelli launched the Imperiale 400, and now Honda have launched the H’ness CB350 to take on the Bullet. At the same time, Royal Enfield are getting ready to launch the Meteor 350 based on the very successful 650 Interceptor and Continental GT.