The Bajaj Pulsar F250 and N250 are the largest capacity Pulsar yet and Bajaj have retained the authentic fabric that made bikes like the 220F such icons even today.

That’s why Bajaj won’t be adopting a high-revving KTM powertrain, instead going back to basics and developing one on their own. And here’s the result, two brand new motorcycles — the Pulsar F250 and the N250. The former is a worthy replacement to the Pulsar 220F, while the naked takes the NS200 game forward. This makes them the largest capacity Pulsar to date! More importantly, this new platform will be the base for the new range of Pulsars that are in the pipeline. 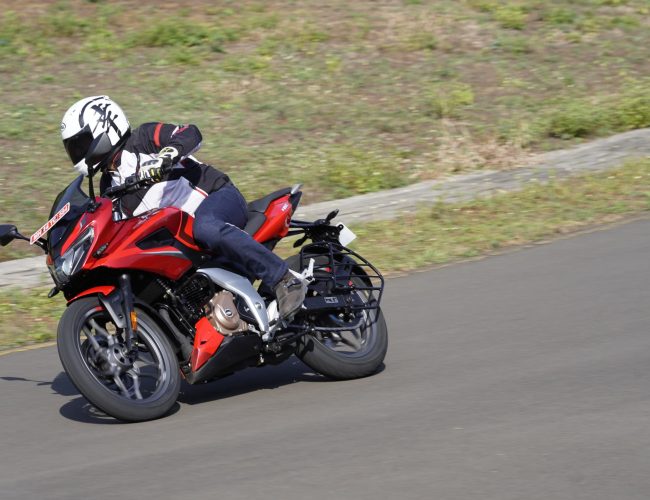 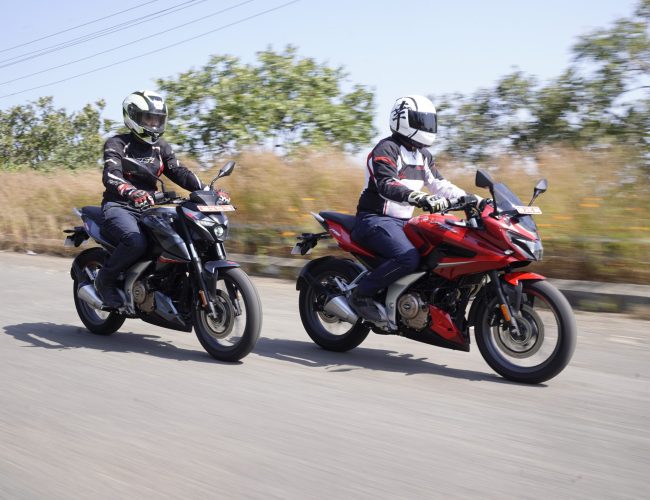 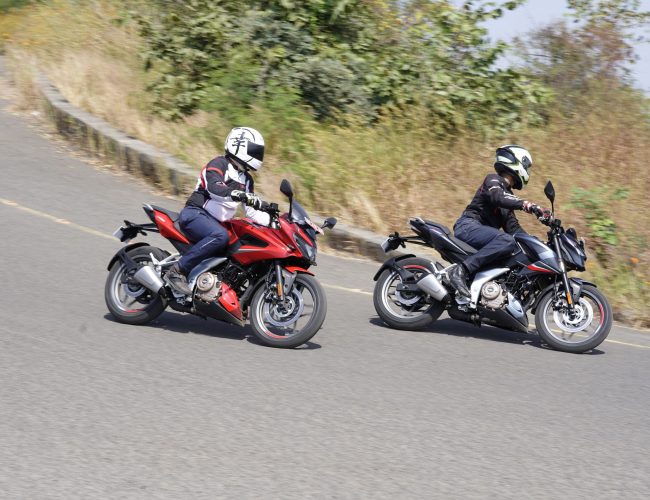 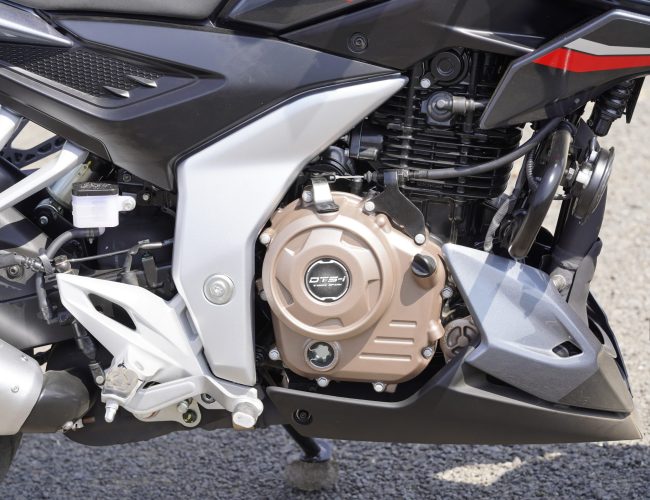 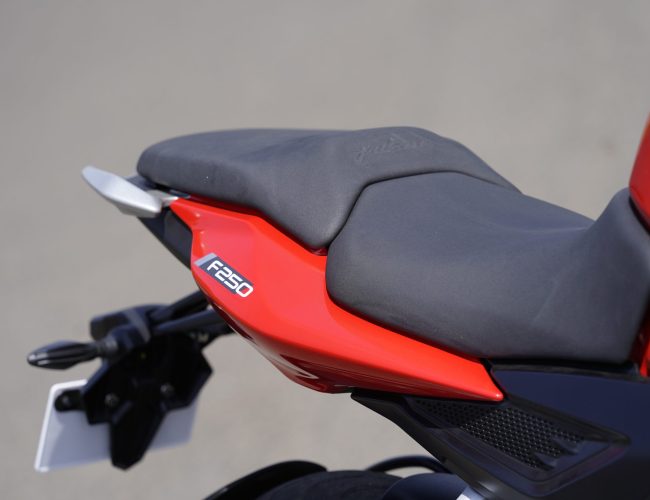 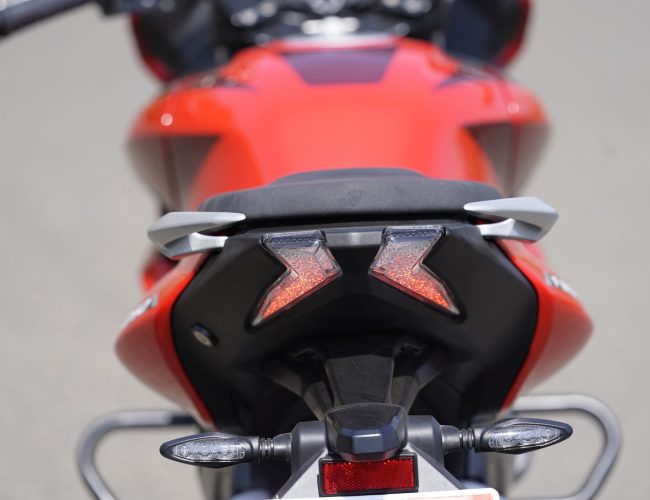 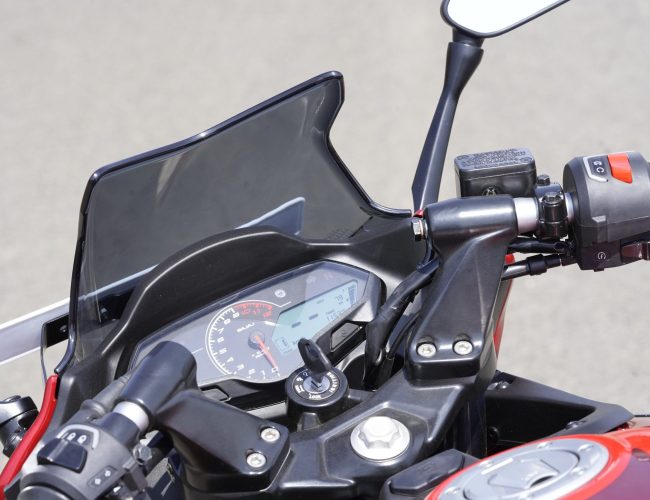 Pulsar F250: Design
No prizes for guessing that the ‘F’ stands for fairing and the F250, like the 220F, gets a half front fairing. There’s also a single LED projector headlamp, cool LED day-time running lights and a reasonably tall windscreen. Like most faired motorcycles the rear-view mirrors are mounted on the fairing and are foldable. I like the way the fairing seamlessly integrates with the fuel tank, and the nice creases and slits on the panel that break the monotony. Even the paint quality and fit-and-finish are better than the older Pulsars.

Stylish elements like floating panels — on the front fender, fairing, belly pan — do add some lightness to the design. Moreover, parts like the fairing and belly pan are now made of lighter Glass Filled Nylon instead of the traditional fibre-glass to reduce weight and control NVH.

The design tapers off towards the tail end giving it a compact stance. There is some resemblance to the Bajaj Donimar range here, including a split tail lamp. The stubby, twin-port exhaust design might have divided opinions but has a nice and sporty bass note. The F250 manages to look new-age yet successfully retains the authentic Pulsar styling. Overall, the bike is a lot more proportionate and compact than its predecessor, which is a great thing.

Pulsar N250: Design
At a glance, the N250 reminds you of the NS200. It’s essentially the same bike as the F250 but without a fairing. Weight 162 kg, the street fighter is 2 kgs lighter than the faired sibling, and a good 18 kg less than the Dominar 250. Having said that, new Pulsars are among the heaviest in the segment.

The N’s biggest talking point is its robo-like face, which the LED projector headlamp and eyes-like DRL create. Though this does resemble the current Yamaha FZ 25. The fuel tank is common to its sibling but gets sharper extensions and there’s a silver plastic panel that imitates the perimeter frame. Both of which will remind you of the NS200. There’s plastic cladding on the upper section of the front fork to reduce visible chrome which isn’t my favourite element.   Maybe Bajaj should’ve used sleeker bolts on the fork T-section rather than the current bulky one. The N250 looks light and ready to fight the city and minimum plastic parts mean fewer parking scars. The rest of the bike is identical to the F250.

Pulsar 250: Features
Bajaj have kept it simple on the Pulsar 250, so don’t expect things like mobile phone connectivity, just yet. Both versions offer identical features list which includes a smart semi-digital instrument display. It looks good and delivers information like gear position indicator, real-time fuel efficiency, range, speed and time. Moreover, the analogue rev counter is a good touch.Pulsar started the trend of backlit switches in the segment and it has been retained. Since it has a self-starter, you don’t get a kick. Also, there’s a USB port near the handlebar to change your phone on the go.

Pulsar 250: Seating Position
Bajaj call the 250s the ‘most friendly Pulsars yet’. Essentially because of the well-balanced rider geometry. After repositioning the battery and changing the shape of the air-box, they managed to drop the saddle to an approachable 795 mm. Making it 5 mm lower than the P220 and a whole 12 mm less than NS200’s. Sling a leg over and you immediately feel as if you’re sitting in the bike, rather on it like older Pulsars. And the riding position is relaxed and not too aggressive.
The N gets a single piece handlebar, unlike the clip-ons on the faired version, which makes the riding position slightly more upright than the F. Personally, the faired version felt snugger to me as it also offers better wind protection at higher speeds. The knees fit nicely in the tank scoops and the feet comfortably reach the ground, making it a friendly bike to live with. The footpegs aren’t too rear-set, so it will appeal to a wider audience, but it did scrape on the test track.

Pulsar 250: Engine
Yes, a brand new engine powers the 250s. Though from the outside, the lower half has an uncanny resemblance to the KTM’s 250 mill, Bajaj maintain that they have no relation whatsoever. From the entire new generation of Pulsars, I was expecting things like four-valves, DOHC and even liquid cooling. Sadly, it remains old-school with two valves, SOHC and is air-cooled. The good news is that the NVH levels are well-controlled thanks to a whole bunch of engine optimisation, including an offset crank.

And though Bajaj opted for a five-speed gearbox over a six-speed speed, they have spaced the gears well. Engineers claim that in top-gear the Pulsar 250’s engine is less strained than some of the six-gear equipped counterparts. We need to take it on a longer ride to confirm this. But we can confirm that the slip and assist clutch is extremely light to use and the gear shifts are smooth and quite precise.

Bajaj believe that the Pulsar fans want a torquey engine rather than a high-revving motor like the KTMs. That’s why this 249.07-cc single makes 21.5 Nm at 6,500 rpm, 3 Nm more torque than the NS200 — available 1,500 rpm earlier. In fact, Bajaj say that 85 per cent of peak torque is available between 3,000-6,500 rpm range. This gives the Pulsar 250s a decent low end and mid-range, which is what you need most of the time within a city. But it doesn’t feel as free-revving and thrilling as the four-valved NS200.

The Pulsar 250 lacks the flexibility and top-end grunt that others in the segment with four-valve engines and proper liquid cooling can offer. And when you want to extract most of the Pulsar’s 24.5 hp, the performance tends to flatten out at higher revs. Pushing it to the limit on the test track, we did manage to see 142 km/h on the speedo of the more aerodynamic F250, while the naked topped out at 138 km/h.

Pulsar 250: Ride and Handling
Another talking point is the all-new tubular chassis which is lighter and more rigid. The unsprung mass has also dropped since the engine is used as a stress-member of the chassis. Narrow 130-section rear tyre along with lighter alloys also help save weight. This makes the Pulsar 250 feel very effortless.

The Pulsar 250 twins don’t get an upside-down fork, but a conventional telescopic 37-mm unit to keep things light. This along with the rear mono-shock are sourced from Endurance Technologies, as before. Bajaj have sharpened the rake angle by 0.5-degrees to load up the front a bit to improve the weight distribution. And you get a feel of that while cutting through traffic and manoeuvring. Though on high-speed straights, the conventional forks can’t match the stability of USDs.

The suspension, though tuned for comfort, doesn’t feel bouncy or soggy. It goes over most road undulations with fair aplomb. Though the 250s are among the rare Pulsars to sport monoshocks, the rear wheel travel has gone up by 20 mm over the ageing P220, keeping the wheelbase in check. And I must mention that though the rear tyre is not very wide, the proven MRF Zappers offer ample grip without compromising agility or fuel-efficiency.

Bajaj Pulsar 250: Braking
Interestingly, the brakes aren’t Bybre units but from Grimeca, which is also part of Endurance. In the short ride we had, the larger front 300-mm disc and 230-mm rear disc performed reasonably well. Though having dual-channel ABS would have been more comforting, instead of the current front-only setup. (Also Read: Best 250-cc Bikes)

Conclusion
These small trade-offs have helped Bajaj price the Pulsar 250s very aggressively. Starting at Rs 1.38 lakh for the N250 and F250 costing Rs 1.40 lakh (ex-showroom prices), the new Pulsars make quite a strong case for themselves. The smooth engine and a light clutch, decent performance with good agility and road behaviour, and the strong style and character that Pulsars are known for making the new 250s a good package… one that maniacs have been waiting for all this while.