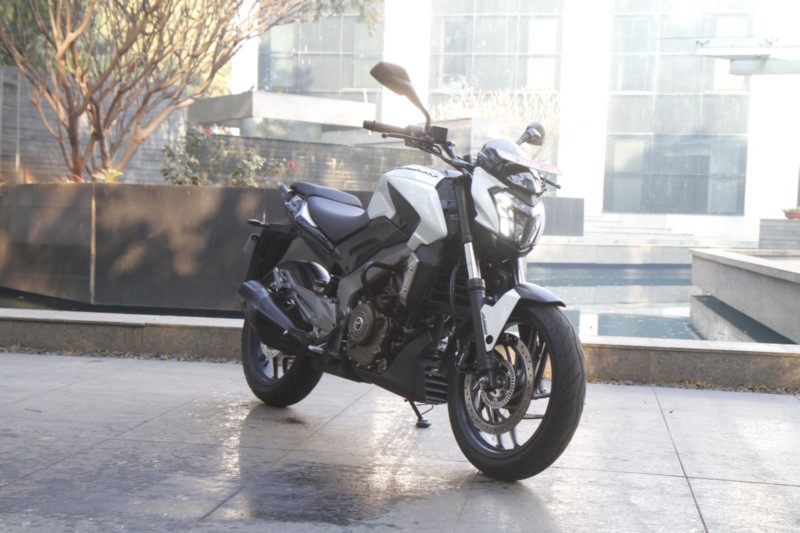 Bajaj’s latest new motorcycle is also their largest-capacity model to date. We ride the new Bajaj Dominar and come away happy. Here’s what it’s like.

The plan was to meet at Bajaj Auto’s base in Pune a little after sunrise. But, in winter, waking up early in the morning isn’t something many look forward to. However, I could hardly get a wink of sleep as the excitement kept me up all night. After all, I was about to ride Bajaj’s latest motorcycle: the most premium and largest capacity two-wheeler they have ever manufactured!

Over the years, we’ve been eagerly waiting for the 2014 Auto Expo concept to become a reality. It continued to play hide and seek with the media and enthusiasts changing its identity from Pulsar CS 400 to Kratos 400 and, finally, settling as the Bajaj Dominar 400. The first from Bajaj’s all-new family of motorcycles. 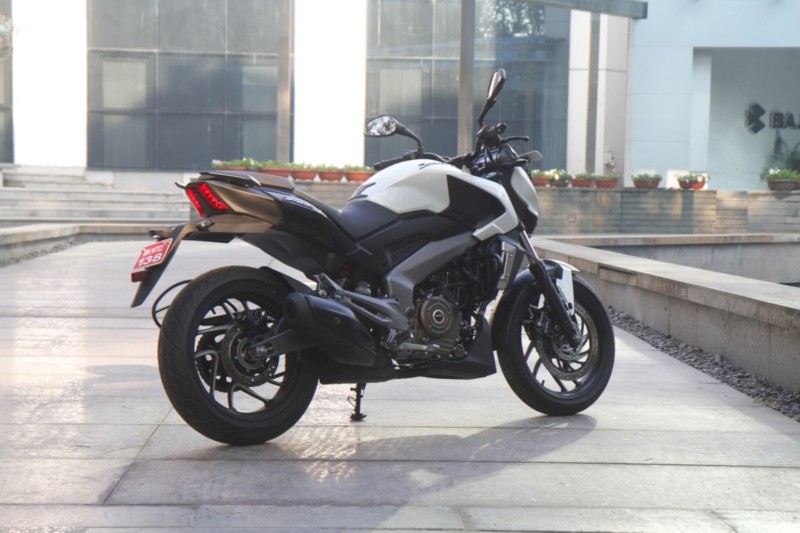 As you might have noticed, this one is a power cruiser, following the line of international models like the popular Ducati Diavel. The relaxed riding position, central mass and neck-less headlight are inspiration from the Italian. There are traces of the Pulsar 200 NS, too, specially in the beefy tank and chunkier beam type perimeter frame.

Bajaj is targeting the fast growing motorcycle touring community of India. Although many manufacturers have tried to crack the touring segment, it’s only Royal Enfield who have managed to capture that space. Royal Enfield sell over 50,000 units of their classic-styled 350-cc motorcycles, while the rest make up the remaining 7,000 to 8,000 units. With the new power-cruiser’s plethora of features and modern technology, Bajaj are eyeing a lion’s share of the segment.

After a quick spin on the Bajaj Dominar 400 in the city, and even getting a go on the highway, here’s what we found out. You can feel the 182-kg weight the moment you lift the bike off the side-stand. The handlebar is wide, seats are comfortable and rider’s geometry, although slightly sporty, is pretty relaxed. There are a set of instrument clusters. The first a digital console, conventionally positioned above the handlebar, which gives out info such as vehicle and engine speed. While the second one is housed on the fuel tank with tell-tale lights for the side-stand, oil, and the like. 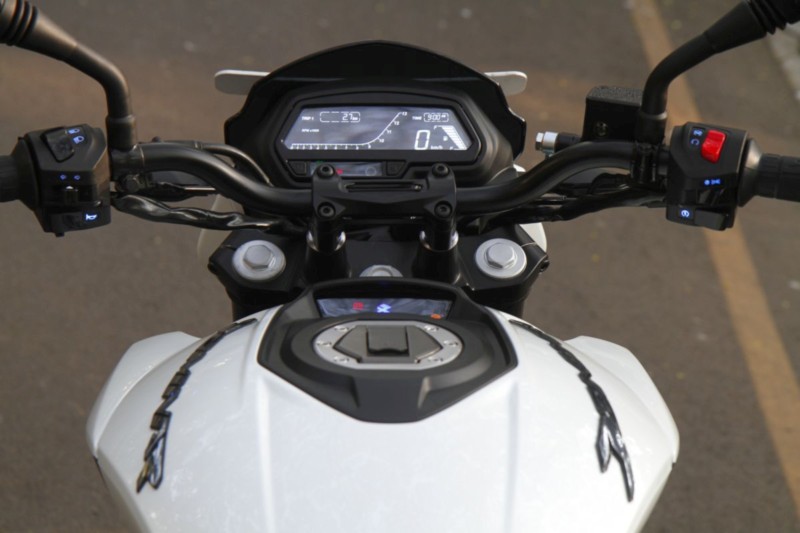 Among the new features are the mosaic full-LED headlamps with 10 LED units in a 3+3+4 configuration. The soon-to-be-mandated auto headlight on feature is present as well, The illuminated switch gear is now a familiar sight and the handlebars get very nice soft rubber grips. Push the self-start button and the motor comes to life with a deep but subdued snarl thanks to the new side exhaust. The clutch feel is relatively light and progressive, and it shifts in to first gear with a clunk.

As you might know already, the 373.2-cc single-cylinder liquid-cooled four-valve motor has been borrowed from the KTM 390 Duke and RC 390, but Bajaj have made some changes to suit the market requirement and meet the desired price. First, they have replaced the dual overhead cams with an SOHC four-valve configuration. Also included is Bajaj’s DTS-i triple-spark technology and the electronic fuel-injection is now tuned to offer a flatter torque curve which is needed for long distance touring. It now makes 8.5 PS less than the KTMs: 35 PS at 8,000 rpm, but the same 35 Nm of peak torque now arrives at a lower 6,500 rpm compared to KTM’s 7,000 rpm. By producing this power at lower revs, the engine doesn’t need to run as stressed and, thus, Bajaj didn’t have to use high-end components which, in turn, reduces the cost of production.

The Dominar 400 takes off without much drama, power flowing in seamlessly. The work put in to improve the low-end and mid-range is evident instantly – as most of the torque comes to play right from 3,000 rpm onward. Trotting around town is effortless and the third gear has enough range to cruise at city speeds. Feed the throttle at any revs, and it surges ahead without any knocking or need to downshift. While we are on the topic, downshifting with the slipper clutch is impressive. Hooking on to a lower gear even at faster speeds ensures that the rear wheel doesn’t lock-up or skip. 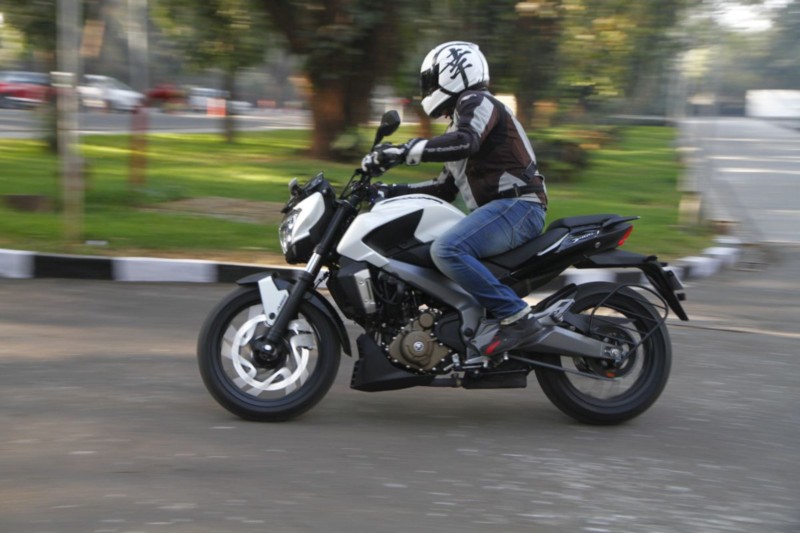 On the highway, you can feel the vibrations creep in on the foot-pegs and the handlebar close to 4,000 rpm, forcing you to shift up earlier than you would have liked. Thankfully, there six gears to work with and cruising at 120 km/h is relatively effortless in top gear. It’s a powerful bike and we got to enjoy the meaty powerband on the open roads. Bajaj claim that the Dominar 400 can achieve the 0-100 km/h run in 8.23 seconds but we’ll have to test the bike to confirm that. While the indicated top speed of 148 km/h is achievable on the speedo without much stress. It also sounds great at high revs, with the exhaust screaming away in fifth at triple-digit speeds.

Straight-line stability is very impressive but the highlight of the Dominar 400 remains its excellent ride quality. We rode the bike over flat tarmac, road joints, patchy road work and broken roads, and nothing seemed to upset the bike. The chunky 43-mm conventional front fork and rear monoshock have been tuned well for our road conditions and remained comfortable for most parts. The combination of the suspension, low saddle height and wide front seat is ideal. This is a crucial point for people looking for a long-distance touring bike.

The good looking 17-inch alloy wheels come with newly developed soft-compound MRF tyres, measuring 110/70 at the front and 150/60 at the rear, which offer decent grip and feedback. You’ll also see one of the biggest disc brakes in the segment on the Dominar with a 320-mm unit up front and 230-mm disc at the back in combination with twin-channel ABS. These offer decent bite and bring the bike to a halt from 100 km/h in 46.19 meters. More importantly the bike doesn’t lose composure and the front remains under control. 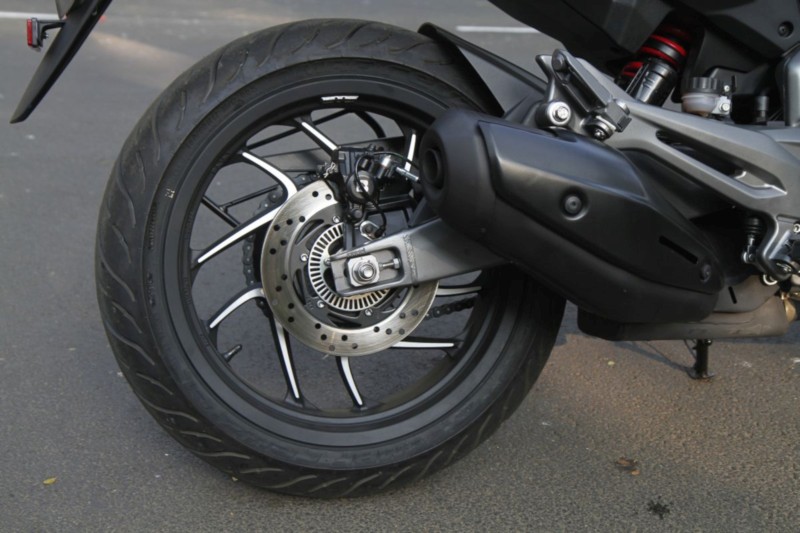 While tackling the city traffic you feel the weight and wide stance. The perimeter frame, long swing-arm (which is made from pressed steel adding to the weight) and relaxed rake angle are better suited for straight roads and wide, open highways. Slow-speed manoeuvring isn’t a virtue but it feels a lot more at home taking on faster and longer corners.

The company executives revealed that in real world conditions the Dominar 400 should return close to 32 km/l which is quite decent. The fuel tank capacity of 13 litres gives a range of 416 km which seems low for a touring machine meaning you would have to make a few stops at the petrol station.

The Bajaj Dominar is now available at Rs 1.36 lakh without ABS, and for Rs 1.5 lakh with ABS, both ex-showroom, Pune. Look forward to a full-fledged road-test review soon.