Ather have expanded to more cities, including Pune, and we subjected the 450X to a real-world range test. 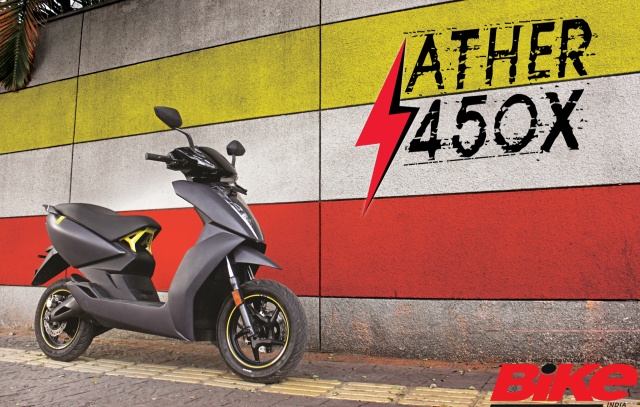 Chapter 2020 of “Motoring as We Know It” speaks volumes about electric vehicles and the pages fill rapidly as electric mobility begins to take huge strides, with more of them confidently making the transition from pretty concepts to practical everyday options. Now we bring you the what’s what of one of the best ones this year had to offer, the Ather 450X.

Waiting at a traffic light astride the Ather 450X, I felt like the odd one out. All the vehicles around me were making noise, vibrating a bit, and giving off enough heat to cause a mild haze. My choice of wheels did not vibrate or give off heat and when it moved, it produced a low-pitched whine instead of a growl or a roar. Odd one in a sea of engine-powered vehicles it may be, but its attributes were perfect for the city.

Developed from the ground up by Bengaluru-based Ather, the 450X is their new flagship and, without bright lights, it looks exactly the same as the 450. Increase brightness and it still looks the same as the 450 but it is evident that the 450X has received more love from the cosmetic division. The lean, marathon runner-like frame is shrouded by many pieces of sharply cut bodywork that fit together well to create a product that looks as futuristic as the thought that went into its development. While the styling certainly works in its favour, the durability of the panels with respect to mileage is something that requires long-term testing. That said, none of it caused annoying noises or vibrations during the few days that we put the 450X to test. Also, there is slight room for improvement in the fit-and-finish department when compared to the established products in the market (both electric and petrol options). 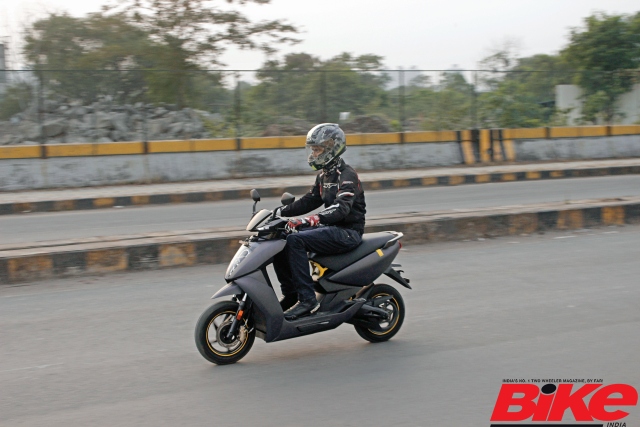 The Ather 450X’s saddle, although well-padded, was not comfortable over a long time due to its skinny proportions and a tall rider’s knees will frequently get in the way at low speed, full-steering-lock manoeuvres. Thankfully, for short city rides, it is perfectly fine and the steering lock does not get in the way while riding quickly. The full-colour, LCD instrument console is one of the first indications that you are astride a futuristic product. Ather have brought in new hardware to offer a seamless experience while using all of the features on offer and it is also set up to receive “over the air” (OTA) updates. However, in our experience so far, the interface has been rather glitchy. We faced issues, including a complete shutdown of the display (easily fixed by a quick reset) and a delayed response during navigation that caused me to overshoot turns on a few occasions. It is nothing that Ather cannot fix, though.

Once the 450X gets going, you will forget all of its minor shortcomings because it is easy to ride fast and it is stable at speed. Motive force for such pace is supplied by a permanent magnet synchronous motor (PMSM) that dishes out a peak output of 6.0 kW (8.2 hp) and 26 Nm of torque while the juice is supplied by a 21,700-cell, 2.9-kWh lithium-ion battery. With the Ather fast-charging unit, the scooter gets charged from 0 to 80 per cent in three hours and 35 minutes but without it… oh, boy, 0 to 80 per cent from a regular outlet will take five hours and 25 minutes. 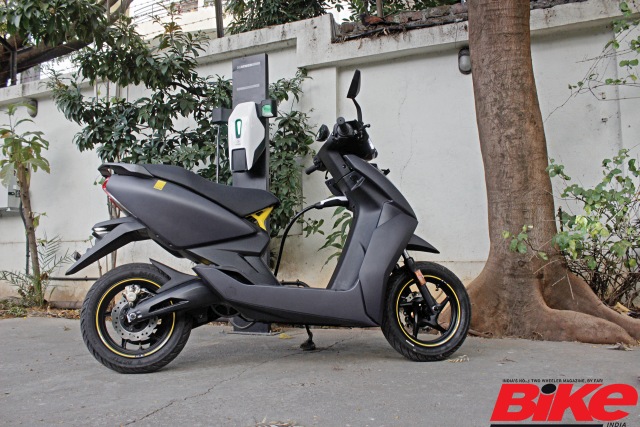 The frame-mounted motor utilizes a reduction ratio (7.8:1) and a belt drive to put power down to the road through the rear wheel. Do the maths and you fill find out that there is enough torque at the rear wheel to send you rocketing off from a standstill and, maybe, even leave a silhouette of dust where you were standing.

All right, maybe I exaggerated a bit there, but it dismissed 60 km/h quickly enough to cause jaws to drop in disbelief. What about the top whack, you ask? That depends on which ride mode you are in. The 450X attains a top speed of 45 km/h in Eco, 60 km/h in Ride, 82 km/h in Sport, and 90 km/h in Warp. We will talk more about speed in a bit but, first, we must address the elephant in the room: range. 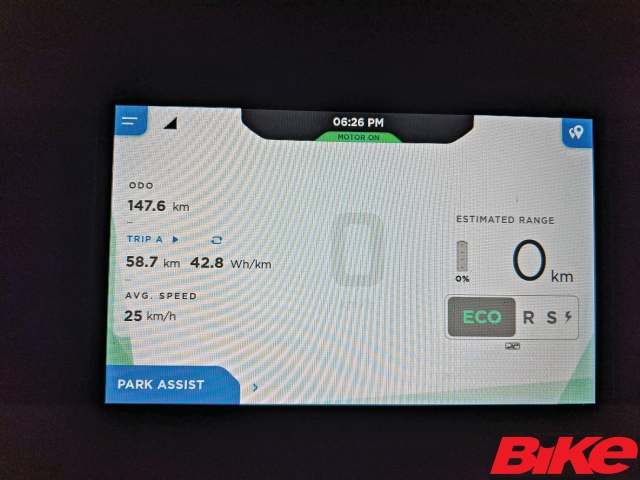 We rode the 450X from full charge until it ran out of juice (in Ride mode) and achieved a commendable 58.7 km against an indicated 70 km on the console. That gap is justified because most of our ride had a pillion on board and we frequently had the throttle wide open as well. So, a less demanding ride will easily return greater range. What impressed us most about the 450X is its battery management system. The motor’s performance was rather consistent throughout our ride, regardless of the state of charge. For example, with two people on board, the 450X ascended a flyover at 50 km/h just as comfortably at 40 per cent as it did when the battery was at 90 per cent full.

The 450X’s suspension is set up on the firmer side; so, it doesn’t waft over bad patches of road like Aladdin’s magic carpet but it is far from uncomfortable. Thankfully, it makes up for it by bringing enviable cornering etiquette to the table. Show it a bend and the Ather is agile at entry, composed through the corner, and confident on exit. In Ride mode, the 450X makes a good case for itself as a daily rider that could replace a petrol-powered scooter for urban use but, personally, I prefer the Sport mode. 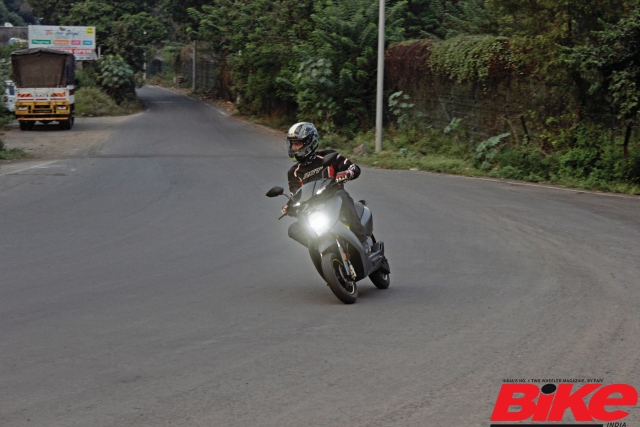 I feel it offers the best compromise of range and performance for someone who does not mind sacrificing a bit of range to liven up the commute. The Warp mode is the fastest with a claimed 0-40 km/h time of 3.3 seconds, but it consumes the most charge, so one had better use it judiciously.

With such speed must come great stopping power and Ather have delivered with excellent ByBre equipment at either end; a three-pot caliper and a single-piston unit bite down on discs at either end with CBS for company. Again, the brakes are great but the CBS… not so much because stoppies and slides come fairly easily.

Ather have now expanded to 10 cities across the country and they do plan to go pan-India soon. In conclusion, if you overlook the minor inconsistencies in fit-and-finish, the Ather 450X is a product that can easily replace a petrol-powered scooter provided you have the patience to plan your day accordingly. At Rs 1.61 lakh (ex-showroom, Pune), the 450X may seem out of reach for most scooter users, but a look at Ather’s unique finance schemes will show you that owning one is not that difficult. Besides, in the long run, Ather claim that even at this price, you will end up saving money as compared to a petrol-powered scooter in terms of fuel and maintenance. Ather have delivered a product that is almost on a par with regular scooters in terms of usability and, if your use fits, I see no reason why you should not buy one.